The Hokies were on a roll. As that’s what my opener read just 35 days or basically one month-n-change ago. Though that was four quality ballers ago and one #5 practicing robber ethics on what is/was a pretty sharp looking hurrying Hokie season. As oh how the sporting World Turns… As now the other Atlantic Coast Tech visits us on a Coastal division rematch clause and my oh my how things have changed. Though what has not changed is that this is a 327-mile roadie. As the Jackets (now) check in with a negative rec’ at 11 up and 13 down (.45) and 3-8 in A.c.c. ball. They have beaten who they are supposed to beat, and yet they have been stung by nearly everyone with any real live name-recognition cachet. Though they are now fighting for their (potential) playoff lives. Nevertheless, as you will read below, this one is about to get defensive indeed… although you wanna know who will ultimately offend who in the end? Read on, to find… out!

Still yet, may St.Joshua & St.Paul bless and sing: “kum-ba-ya”

Six of Pastner’s former assistant coaches have (already) gone on to their own careers as head coaches.

Daddy Josh’ is (still) married to Kerri Lamas; they have three daughter’s: Payten, Sydney, Pastner, and one stepson (Ethan); Lord have mercy.

Abdoulaye Gueye and Curtis Heyward II at least give you some spot minutes here and there off the Jacket pine. Abdoulaye Gueye by way of Dakar Senegal fame is a 6′9″, 217 lb., r-Sr., 7′ 3” wingspan frontcourt rebounder and defender who is pretty under-cooked everywhere else. 7.4 ppg with 4.1 boards and 1.1 blocks, a steal and an assist on 51% from the floor and now 62% (up from a horrific 25%) on FTA’s says, so; although the book here reads that Gueye is developing and that he is a natural leaper who runs the court well enough. As a 660% improvement in scoring off of a broken wrist (St.Julia bless) makes you wonder what this kid can do with full health/matriculation? Because nobody is wondering about this worker-bee’s heart, that just drones on and on. (UPDATE: really developing, sharply, ⇑ as his offense is nearly doubling since we saw Gueye last)

Curtis Heyward II s a 6′5″, 202 lb. second-season Wing who looks like he’s at least 30, maybe 33-35 years young. Greg Oden syndrome 1o1 if you will… nevertheless, this Heyward (22 years) has a 6-11 wingspan and a very rough-n-tumble attitude. Bet the under on guys who pick on this Heyward. As this Heyward has a tag for driving hard, a high hoops I.Q. and his bio’ says he: “specializes in: hard-work.” So there you go, a high octane, calorie burner extraordinaire. As every team needs a lead-pipe sparky welder kinda kid such as this. Curt and his blossoming game get you 6.5 ppg, on 2.8 rpg and 1.3 pockets-picked. Mix in 27% deep and 76% on his FTA’s and you have a glue guy who will, will his way to low teens in scoring come 2021. As Curt knows how to win, an Oklahoma state title than a full-fledged scholastic national title upon transfer to the NJ. hoops factory of Brewster Academy both says so. (Apparently no relation to R.I.P. Craig “Ironhead’s” kid who just graduated last year that I could find) (UPDATE: modestly dipping everywhere I looked… ⇓, here) 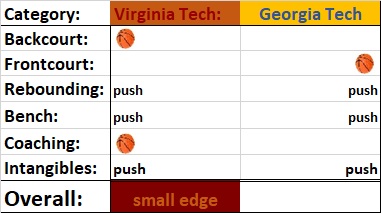 the takeaway:
The takeaway here is… this one is no one’s gimmie or lay-up, a cherry-picking, or breakaway clear path to the basket game.

All the more so at home where Eye am want to type that “yah it should” be as this is a lowercase Atlantic Coast Club to be sure.

Nonetheless, the other Tech means to do us, hard. In particular on the halt-unit end. where they are even starchier than when they gave us a good ATL 1-shot scare last time out. Still yet, fortunately for us, points are at a premium for the other Technotronic Atlantic Coast hoops squad this season. As the Jackets can defend, although (offensive) output is just not their long suit at the moment. 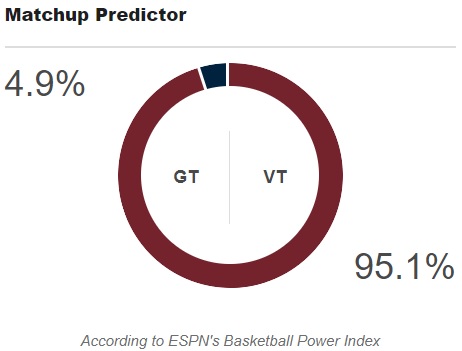 Our handy-dandy friend the so-called Forum Guide of Graham Houston fame is calling for a drunkenly, handsy under the table -sans the table- publically obscene 66 point VicTory in this one. (methinks we can dismiss that and Eye will eat these words if we even win by six-five).

In the most recent five-game set… the Gobblers are now up (⇑⇑) a sharp looking +13% in shooting from the floor (due mostly to G.Tech arctic circle shooting), and the up (⇑⇑) a whopping +19% again from behind the arc (due to G.Tech hooping in the R.M.S. Titanic’s gymnasiumm) with a now virtual season-best vs. anyone with a pulse (⇑) +9 advantage in rebounding margin. Wow, go fig’ on all of that?!?

V.Tech is actually +3 on rest and hooping @home, plus the other Tech must travel for this one and they just logged a 678-mile roadie up north to South Bend.

Overall FT-shooting has now opened up (⇑) to a surprising in-season +6% Hokie edge. With G.Tech .25 so far as a visitor and the Hokies .916 as a host.

Well, I’ma gar-ron-damn-teeing that Tech wins this game or I b.street will eat these very, words.

And quite honestly I was messing around with the upset pick here -as I prolly will be- until if/when “5” gets back. (J.Rob’ I mean; as he’s the most valuable Hokie Qb this side of T-mobile trying to stay unscathed, upright and errect in the pocket).

If you ask me -and you did via reading these very words- this is nearly a needy game for both squads. V.Tech needs a win here to break-out-of this gimpy/limpy funk. And G.Tech surely must win to entertain any R.A.T.T. post-season hoops hopes.

Ergo, therefore, to wit, I expect each team to (attempt) to land their best A-game punch. Even if both teams have a feckless offensive punch or even if this one turns into a jabbing contest that lacks (offensive) outburst voltage indeed.

That all being rightfully said… Eye did feel a good better after I updated the stats and ran the Forum Guide.

The U.s.s. V.Tech may be leaky, taking on water and calling for extra pumps. As “Bravo Zulu” we just, ain’t.

However, the other Tech (Gah.Tech) has offensive decks that are nearly, awash. On the bottom mind you -where the view never changes.

The other Tech (the Wrambling Wreck) can play some mean D and who likes having Yellowjackets get in your shirt?

Not me and anyone allergic to such (May St.Ambrose bless us). As this Atlantic Coast contest has Benadryl eyesore written all over it.