The Hokies now host 11 up and 8 down, (9th place .538 or 7-6 in the A.c.c.) Georgia Tech of all things ATL Delta hub fame. The Wrambling Wreck is also o-1-4 as all things 2020-2021 cancellation and postponements go respectively this campaign. As this is not a great All Championship Conference team— tho’ it may just be a team that has been a bit good’er of late, if you will. Nonetheless, what you wanna know is… who is gonna win this one and by how much, right? So, read on to find… out!

Kid, Josh Pastner, is a Glen Dale, Wva., native and the son of Marla and Hal Pastner. Hal is a high school/A.A.U. coach and basketball promoter in the Houston (Tx.) area. Josh Pastner knew he wanted to be a coach since he was in the 5th grade. By the age of 13, he was publishing the Josh Pastner Scouting Report of local high school talent in the Houston metro’ area | at the age of 16, the Houston Hoops A.A.U. squad was turned over to Josh Pastner by his father/coach Hal; as this was Josh’s first job as a head coach! While a teenage A.A.U. coach, Josh Pastner coached future NBA players such as Emeka Okafor, T. J. Ford, and Daniel Gibson. WOW!

Though Eye do know that Joshies overall numbers and his digits in the ATL are trending upwards; so, there are a couple of encouraging signs, here.

Seven of Pastner’s former assistant coaches have (already) gone on to their own careers as head coaches. Pruning a broad branching coaching-tree, already! 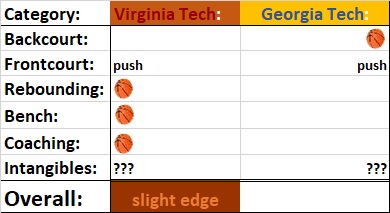 Bubba Parham is a gliding-looking 5′10″, 162 lb., r-Sr. season rarefied Lexington, Va. or V.M.I. transfer back-up One. Where Parham -you may recall- made the All-Southern Conference team as a sophomore and was named SoCon Freshman of the Year, the year before that. As this bowling-star in the making (off-court) is a 3-point taking fiend from downtown. As this Bubba’s range is basically the gym; if he’s in it? He’s open and his career 39.1% deep great for 21.1 ppg last time as a Keydet tells you just how explosive this mighty-mite can be out on the perimeter when Parham gets it going when dialing long-distance. As of Gah.Tech now, however, he nets you 7.7 ppg, with 3 rpg, 1.8 apg and he gets you 1.1 swipes in relief with 81% FT’s if you need him. As this former now homecoming septa-A (AAAAAAA) Georgia H.S. champion Bubba is instant O, just add P.T. And he’s prolly your Fox Mulder or X-factor baller in this one.

Sophomoric Kyle Sturdivant is a 6′2″, 198 lb., is also a Southern California transfer baller. A One or Pt.Guard in this case who transferred all the way to the ATL to enroll in… aerospace engineering! GT.edu ‘wow’! Don’t get to type that one out, often; or… ever. That slide-rule praise rightfully bestowed, Kyle is said to be a tough playmaker and a solid scorer, adept at controlling the tempo of a game. And Kyle was a VHT peach-state escapee (93rd in America per Rivals). Where he enjoyed a buzzer-beater rep’ for basketball factory Northcross. Said to play as ‘an older’ player does already. Tho’ his 3.4 ppg with 1.2 rpg on a meager 25% from 3-point land say he may need to mature for another year, or three.

the takeaway:
The takeaway here is… well who knows who is about to get took here? 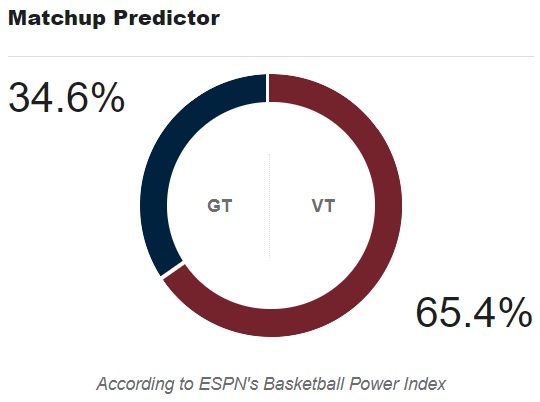 As Mike Young and company could have the freshest legs they’ve had since about September/October. Or they could be covered in O&M oxidization.

Or ring-rust if you will.

Georgia Tech is also a tough nut to intellectually crack. As they have been upset by dippy-looking Mercer and Georgia State every bit as much as they are actually a mere two, that’s (2) shots removed from being four places higher in the All Coaching Conference pecking order.

And yet if my Aunt Kim had nutz-n-a-bolt she’d be my Uncle, Tim.

Threeché on their 2-shot sippy hole.

Though it does make you wonder what happens if we loose wintertime traction
and end up in deep here?

Our handy-dandy friend the so-called Forum Guide of Graham Houston fame is calling for… I’m not sure? As with this much of an O&M scheduling displacement gap, these are some misguided results indeed. In recent terms (nearly the last calendar month) the Forum Guide is calling for a seemingly umpossible +40-point Gah.Tech VomiT of all things Vah.Tech here. However, when taken from stem-to-stern things normalized a bit and called for a +20-point VicTory dance or about a two-basket win when taken pro-rata. (STRANGE Forum Guide to run… which makes me wonder if the more recent digits know something more indicative or not?)

The annualized year-to-date vitals say that… Nobody is up +any% in shooting percentage margin (per: GT up +3% on O and with VT up +3% on D); with V.Tech up +4% in 3-point percentage margin (all of it for a stiffer D), and then with V.P.I. up a nearly astonishing +10 caroms in rebounding margin year-to-date (thanks to +5 from VT and then –5 off the glass from GT seasonally).

The most recent 5-game metrics say that… the Hokies are now up +2% in shooting percentage margin (with VT twice as good as GT marginally on D, although both teams have slipped of late); with the Gobblers now up a lucrative +9% in 3-point percentage margin (more so on D, tho’ better O&M O as well), and finally with the Blacksburg bunch up +9 in collections in rebounding margin of late (due to the Jackets getting short-shirted entirely on the fiberglass fortnight recently).

Snoops say that the other Tech (G.Tech) has been something of a 1st-half squad this season. They open up great and they tend to end at least good, or well enough. They get outta step to start and they tend to remain outta-sync. Start=finish here.

Observe… the downright lofty Net Ranking, R.P.I. ranking, and the 5th best in the All Coaching Conference pre-season ranking by most of my pre-season preview mag’s.

Or, in other words… does somebody(s) know something(s) that Eye, don’t?

As I did not have G.Tech pegged this high this year.
(Did you?)

Nevertheless, this is an old-WW2-school British saying that goes… “When ten men tell you you’re drunk you had better lie down!”

And although I swear this was only a 2-beer weekend,
I’ma wondering what I missed, here?

As G.Tech is backcourt good enough, although well south of great upfront (sans Wright). And the Hokies are on 22 homesteading down-days. Schools out at least on the hardwood of late. So, is that code for freshest legs ever or for rust?

Naismith Men’s College Coach of the Year watchlist member (Mike Young) and Eye would both like to know?

Or maybe we will find out in the 2nd-half… as Georgia Tech is tough to guard when their backcourt duo of Jose Alvarado and Michael Devoe are clicking. The Jackets are 8-1 overall and 6-o in A.c.c. games when that two score in double figures. So, there’s your participatory mm’s of Hg or the Mercury for your in-game barometer right there gents.

Those two go off and the other Tech can pinch this one, even on the road.
Those two fall off and the right Tech should win @Home. Me?