Today’s (b’speak) word of the day is… (new and improved) … Polytricks.

Freeze.edu attended Senatobia High School and the University of Southern Mississippi, from which he graduated in 1992 with a Bachelor of Science degree in mathematics and a minor in coaching and sports administration. Oddly enough, he never played football… tho’ was good enough to campaign two seasons of JuCo baseball at Northwest Mississippi Community College where he picked up a 2-year Associate Degree.

It was while attending So.Miss’ that Freeze became active in mission projects, serving as a missionary in Houston, Salt Lake City, St. Petersburg, Russia (St.Xenia bless!), and Australia. Freeze also served as the state president for the Mississippi Baptist Student Union.

A successful high school football coach at Briarcrest Christian School in Memphis, Tennessee, big-whistle Freeze coached Michael Oher and Greg Hardy. He subsequently served as the head football coach at Lambuth University from 2008 to 2009, Arkansas State University in 2011, and the University of Mississippi (Olè Miss) from 2012 to 2016

Under Freeze, the Olè Miss football program committed various recruiting and academic violations that figured in the NCAA’s decision to expunge 27 of Freeze’s wins and ban the Reb’s from post-season play for two years. He resigned from Olè Miss after officials discovered that he had used a university cellphone to call escort services multiple times over the course of five years.

In his first year with the team, the Liberty Flames played to a 7-5 record, qualified for a bowl game for the first time in school history, and accepted an invitation to the Cure Bowl in Orlando, Florida. On December 10, 2019, Freeze signed a 5-year extension with Liberty. Coach Freeze enjoys Arbor Day as well… as he has already spawned two coaching-tree roots: Tom Allen: Indiana (2016–present) and Matt Luke: Ole Miss (2017–2019). All other things aside, make no misQ here… this is a good dang ‘ball coach.

Freeze and his wife Jill have three daughters; Ragan, Jordan, and Madison.
Freeze is a born-again Christian and has been outspoken about his
faith throughout his coaching career. 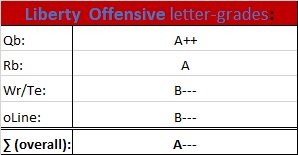 Liberty is a decent enough 48th in Net Punting; and so is Liberty punter Aidan Alves. Aidan Alves is an Ampipe Bulldog from my home Keystone state (Pa.). Well, actually he hails from Dillsburg, Pa., tho’ that’s close enough.

AA stands in at 6′1″ and tips the Toledo’s at 2o5 r-Jr. year lbs. Alves has a rep’ for leg-reps on your local gym’s leg-machine. As he blasted nine 50-plus yard punts, including a pair of 70-yard punts last year as a Ray Guy finalist. He also has 4 mo’ career coverage tackles than you and I do combined; so he is not your typical afraid to stick his nose in the fan footsie fondue finger-food afterparty specialist. Alex was a soccer and lacrosse Olympic crossover star in scholastic terms— where he had a tag of a being a clutch-K with several game-winning FG makes. Alex did not have any national listings that I could find, tho’ he won every leg-work award regionally from a pretty smaller or lowercase classification non-football-factory school. This is a good punter with a better than good leg.

Alex Barbir is your K1 here and frankly, (ST’s pun intended) Eye am a little surprised he is still the K1 for Liberty at this point? As this Barbir-doll has missed 2 P.A.T.’s and is only .333% from ≥27-yards thus 2020 far. i.e. not everyone gets to keep their gold-contrast as a “one” when you miss like dat. Still yet, Alex is a 5′9″, downright sawed-off sparkplug looking, plucky 223 lb. K1! LOL. This dood looks like a lower level college-ball Lb or Rb at first blush. Alex is also a pretty big-deal Penn.State transfer ex-K1 for the Nitty-Lions. Where he was KO1 (kick-off specialist) and that tends to suggest that leg-oomph is not wanting here. Tho’ that was 2017 Happy Valley and since Alex got to Liberty he has been kicking it wif the bench. However, Alex did tally a whopping 125 touchbacks on KO’s down in Georgia High School play. So there is that, and there is also a striking 66-yard FGA scholastic make! This merited Alex the 7th K in the nation spot courtesy of 247Sports. So again, again, again, leg-strength is not wanting here, as Alex can boot it from here to Tennessee, even if it sometimes lands in… Kentucky. And oddly enough… he seems to have more ‘bang’ on the ball on FGA’s than he does on KO’s themself… go fig’ on that?

Special Teams letter-grade: this is not a bad ST’s unit overall, it is however Place-Kicker electronic tabletop shaky and that’s weighing the overall A to F grade down a bit.
C+++ here. (would be mo’ with mo’ FG-kicking).

Number of  flamers who could burn  @Tech=8 maybe 9

…the takeaway here is… this is Liberty’s best team in years.

This is supposed to be Fu’s second-best team in his half-a-decade worth of O&M years.

This all conspires to annualize things in a way that could yield a pretty fair to middling pigskin contest that could be contested for longer than any of us thought when this contract was signed a few years back.

The thingy is… if Liberty gets beat here?
6-1 is no bad Flamer start.

Neither was winning the Cure Bowl last year.

Now, if VeeTee gets beat here?
Do I hear anything better than a 2-3 Techno’, finish?

As VeeTee will play three Top 25 teams in their next four games and it begins with this week’s home game against #25 Liberty!

formulae here favors… strength of schedule or actually a rather liberating lack thereof.

Check it out… Liberty has beaten the following…

Which does surely a still prefect 6-nil count. Granted.

#ChallangeA.c.c.epted… there are 1,440 minutes in a day and Eye hope we don’t need much more than ~3-quarters and change worth of work here. Eye… hope.

the optics…
…see the skinny below…
Or, ask the nearest member of the wimminz species how she feels about the “little-guys”.

As the eye-test here says that Liberty prolly does need some Hokie-help to win head-up.

the skinny…
…is just that. LU’s D is kinda, skinny.
So, don’t fight their fight and crouch down. Go 1960’s mauling straight at ’em.
Lombardi, Kramer, Thurston, Gregg football until the Ag.School cows come home.

Lo.FM Analysis:
This is not a good, look… men. Not at all. Both on 1st and 3rd-down O&M defense. Both of which sure look offensively inviting to me. In extreme particular on the penultimate down or 3rd-down itself. Keep an Eye or three on this one when it is fish or get off the pot, time.
sizey EDGE=Liberty.

Time To Throw analysis:
Although not quite backbreaking as line-item-analysis piecemeal goes… 75% of this does favor the Hokies to go’on and plum ‘git after’ the Flames and liberate some negative-stops on Saturday afternoon. EDGE=VeeTee.

most recent 3-game splits:
These science-fact show us and Coach Spock that… Liberty’s throw-O is coming on a bit of late; and this O becoming more well-rounded could prove to be rather acute to opponents indeed. The Liberty halt-unit is just a bit more user-friendly down in the trenches in run-fighting in the last fortnight of scrumming.

The Fu’fense has fallen off by about two 1st-downs per game on O, tho’ O&M eggs and j.Ham has improved by right at three fewer fist-downs allowed (–30 ypg) per game. So, the Techsters are nearly awash here.

Overall: this is mixed as 3-game trends go.

Home/Away splits:
These objectively show us and H.A.L. that… Liberty’s D is nearly the same in your house as they are a whopping 15′ tighter out on the road as their run-fills shape up a smidgeon. The Liberty O run-fits however downright detonate in your backyard for a mind-boggling ➕90-yard betterment 🎼”welcome to our house”🎶. Or a  “daisy” indeed.

O&M eggs and j.Ham is about +30 ypg softer threw the airwaves @home, although a most welcome nearly –80 ypg fewer allowed in Lane Stadium down on Worsham Field as his run-fills go. The Fu’fense moves upward by a whopping 12′ of Total O. Although our run-shapes are much more ship-shape on Duck Pond (+45 ypg), where our home field passing tends to, submerge (–40 ypg).

Overall: whoever wins this run-game H/A toggle wins here. Although as is, this is nearly a canceling effect year to date. EDGE=push

Forum Guide:
Our handy dandy friend, the so-called: Forum Guide of Graham Houston fame is merely saying that Liberate did conscript fellow A.c.c. Syracuse up in Will’s so-called: Jiffy Pop Dome by a 38-21 tally a fortnight back. And that’s no bad win for @Syracuse. Still yet, there are no mutual round-robin head-to-heads to compare here. Audubon, rejoice!

The Flames’ 6-o start matches similar starts in 1989 and 2008 when they competed as a D-1aa football team. Their current eight-game winning streak going back to last season is their second-longest to the 11-game streak compiled over the 2007-08 seasons.

Not half bad, is it?

Because, in the two years as an FBS program, Liberty has allowed two or more rushing touchdowns 11 times. Liberty’s record in those 11 games you ask?
1 up, 10… down.

Or the classical old-school boxing adage: “a good big-man beats the good little-man.”

Oranges to tangerines notwithstanding… although Coach Falwell’s polyester may just be cunning indeed… the mightier team (and oLine) should wear the little man down here. At least a little bit as this one wears along…

No matter how good LU’s Qb1 or their very own Dematrius Davis (tho’ spicier/stronger),
and his polytricky stable of Rb’s may indeed be.