The Hokies are coming off of punting NC.State good-n-hard out on the hard-fought hard-won Atlantic Coast Clubbing road after (somehow) holding the ‘pack to their all-time penultimate offensive nadir of 24 freakin’ points! Hoorah! And if you bet that… you Sir/(ma’am) can finish this column for me write now. As I yield at your prognosticenti green-light. In the meantime, however, we’ve got another really tough one on our homesteading hands after the greatest Hokie hooping gut-check I’ve seen since “bimbo” upset uva all by himself his final year. As Saturday was indeed a helluva a Hokie win although Monday promises to pretty much be a helluva a Hokie (re)test. Nonetheless, you wanna know who is gonna win, right? So read on, to find… out!

Coach Mack Mack started his coaching career as junior varsity head coach at McAuley High School, an all-girls high school in Cincinnati, in 1993. In 1995, Mack was named head coach of the girls’ varsity basketball team at Mount Notre Dame High School in Reading, Ohio, where he received the 1996 Coach of the Year award from the Cincinnati Post.

Coach Mack then went back to Xavier and later to Wake Forest as an assistant coach. Then he landed the big-whistle job at his secondary alma matter of Xavier. Where he only went for this… Big East Coach of the Year (2018), Henry Iba Award (2016), Atlantic 10 Coach of the Year (2011) and the very interesting Skip Prosser Man of the Year Award (2011). Dang. Impress much? Coach Mack has never had an L’ing season as a big whistle at any level. His bottom year was 17 wins and he went to the big dance 90% of the time at Xavier. And although he curiously only holds one conference crown to his credit, coach (big) Mack also holds: 1 final-4, one Elite-8, and not less than 4 Sweet-sixteens behind that. Or in other words… this is (apparently) a big-time post-season pressure-cooker-coach. Then last March Coach Mack inked a very fiscally lucrative seven-year deal at basketball factory Louisville that flirts with nearly $30 XL before its all said and won.

Coach Mack is known for his physically brash style, man-to-man D, rebounding, and offensive freedom (i.e. he don’t call as many sideline plays); in his signature ½-court O.

The Mack daddy is married to the former Christi Hester, a Louisville native and former University of Dayton and Holy Cross guard (1996–2000). They have three children and resided in Northern Kentucky before he took the Louisville position. In 2017, he earned an honorary degree from Arizona State after beating Arizona in the NCAA tournament.

Louisville at a glance:

6′6″ and 215 lbs V.J. King is the only (former) returning Cardinal starter and you can see where he is right now. Or in other words where you see him is when you see him checking in from the… bench. That’s unselfish enough as coach Mack is clearly building for the future with a very sophomoric line-up overall.

V.J. is a G/F ‘tweener in the classical sense and he plays more so as a glue-guy with 4.6 ppg and 3.1 rpg with so-so (at most) shooting skills with 13% from 3-point land and 37% overall. As the tags here read: “inconsistent” and “frustrated”; and lest we forget this Fairfax, Va. native and Commonwealth refugee VeeJay was only the no.20 kid in America per ESPN and he was only the Virginia Gatorade Player of the Year. So “yes”, more was projected here. Tho’ King does have 2 gold medals (one USA basketball and one FIBA) and that’s three more gold medals than you and I combined. He also has three All-ACC Academic basketball team selections and that is four more than you and we. Thus making this King one that you can easily hope does get crowned and turn in a royale season before it is all said-n-done.

Darius Perry 6′2″ and 194 lb. back-up second-year One. Perry drops you 5.9 ppg in relief with a couple of assists. Perry was merely the no.52 kid outta after his Wheeler win in the Georgian Class AAAAAA state championship run per ESPN. He did start off-n-on last year and the expectations are higher than the current productions are here.

the takeaway:
The takeaway here is… that coach Mack has Louisville playing some big-ball of late with their recent six-game winning streak in what most thought to be (something) of a rebuilding -or at least something of a reloading- type of year. 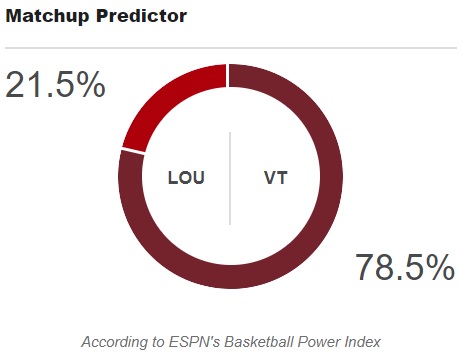 As 16 up and 5 down (and a shiny 7-1 in the A.c.c.) is prolly a year ahead of schedule or hooping pyrite. Nonetheless, we will have to ask 2020 up on that as that is the difference between retrospect and prospect indeed.

Though either way… this too is an Atlantic Coast Coach of the Year candidate, to be sure.

V.Tech is still 1.00 or a perfected (11-zip) @home whereas Louisville is a rather respectable .667 visitor in your house. The Hokies are also +3 in rests in the last fortnight of play and balling at home on top of that.

In most recent 5-game trends… V.Tech is holding steady at +4% in FG-percentage margin from the floor, although now only up +2% on 3-point percentage margin (thanks to better Cardinal defense) and surprisingly enough, Rebounding Margin is only a couple of tenths removed from equilibrium or push.

With the Gobblers are a nominalized +1% for the year from the charity stripe.

For me at least— Lousiville is a tough call as they (seemingly) have one offensive swagg artist (Jordan Nwora) and a bunch of very complimentary ballers who have bought into coach Mack’s system in full. Investment 1o1…

That’s no insult either, that’s complimentary in 2019 every single girl is pretty and beautiful terms. As those of us who is: “D, none of the above” already know, Louisville hardwood is Gestalt Theory personified right now indeed.

As this team plays hard, it plays tough and it plays, smart. (that remind you of anyone?) And even if these Cardinals are something of a snipe-tipping, unicorn hunting, red-herring wearing paper-tiger… these Cardinals have for sure been soaring of late. So they have to be doing something right as they force you to beat them head-up without beating themselves.

Likewise I’ma left wondering how much petrol we have left in the tank after a stunning @NC.State VicTory on such a quick turn for such a thin O&M squad? As there is no denying that Louisville is the deeper club here and that may factor in later on in this contest.

And it is strikingly curious that Louisville only allows 21% of opposing 3’s to tickle the twine out on the road. With the Card’s up nearly 10 Windex wipes as visiting rebounding margin goes… per coach Mack being a true road-warrior indeed.

As one could argue that in horse-racing terms the Hokies are due to:
“bounce” here as mixing of sporting-metaphor goes.

That and Kerry’s ankle (may St.Servatius bless)
have me bugged-out.