Virginia Tech men’s basketball looks like it may, might; will— finally play mighty North Carolina in mens hoops! Maybe…

The Hokies now post-season vettè vs. the ultimate “Winter is Coming” oxymoron of hoarfrost itself… U.n.c. The T.Heels check-in at a surprisingly lowercase (for them) 17 up and 9 down. Or at a modest-looking by James Worthy vs. Fred Brown standards…  (.647), 11-6, or 6th-place in the Atlantic Coast Conference. (while going o-o-4 vs. all things 2020-2021 as cancellations and postponements go respectively). That’s un-good for a team that was not picked any lower than 17th way back in September by all my pre-season mag’s. Nonetheless, and that all rightfully stated, what you really wanna is who is gonna win and by how much, right? So, read on to finds… out!

Baller Williams lettered in basketball and baseball at T. C. Roberson High School in Asheville, NC all four years. In basketball, playing for Coach Buddy Baldwin, he was named all-county and all-conference for two years (1967 and 1968), all-western North Carolina in 1968, and served as the captain in the North Carolina Blue-White All-Star Game. Williams has stated that Coach Baldwin was one of the biggest influences in his life. Williams went on to play on the freshman team at the University of North Carolina at Chapel Hill and study the game under legendary coach Dean Smith. When Williams was a sophomore at Carolina, he asked Smith if he could attend his practices and would sit in the bleachers taking notes on Smith’s coaching. Williams also volunteered to keep statistics for Smith at home games and worked in Smith’s summer camps.

After coaching golf and hoops in high school for five years; in 1978, Williams came back to the University of North Carolina and served as an assistant to Coach Dean Smith until 1988. During his tenure as an assistant coach, North Carolina won the NCAA national championship in 1982, the first for Smith (and Roy); and the second for North Carolina. One of Williams’ more notable events came as an assistant coach when he became instrumental in recruiting a nobody who was already cut from his H.S. team, some kid named… Jordan. After that, taking over at Kansas, his Jayhawk career was riddled with wins (28 per year on average!); conference titles (9); and more a few recruiting foibles as well. Since getting home to U.n.c. coach Williams has notched two national championships (2oo5) and (2008). Coach Williams is the only basketball coach in NCAA history to have 35o or more victories at two NCAA D-1 schools {sic: Kansas and North Carolina}. Coach Williams is the only coach in NCAA history to have led two different programs to at least four Final Fours each; wow. In 2oo7, Coach Williams was inducted into the Basketball Hall of Fame. Coach Williams’ teams have made the post-season 29 outta 30 times. He was won a stunning 15 different coach of the year awards nationally or in-conference combined. He has won 23 total regular season or tournament conference titles and put 39 kids into the Association.

North Carolina at a glance: 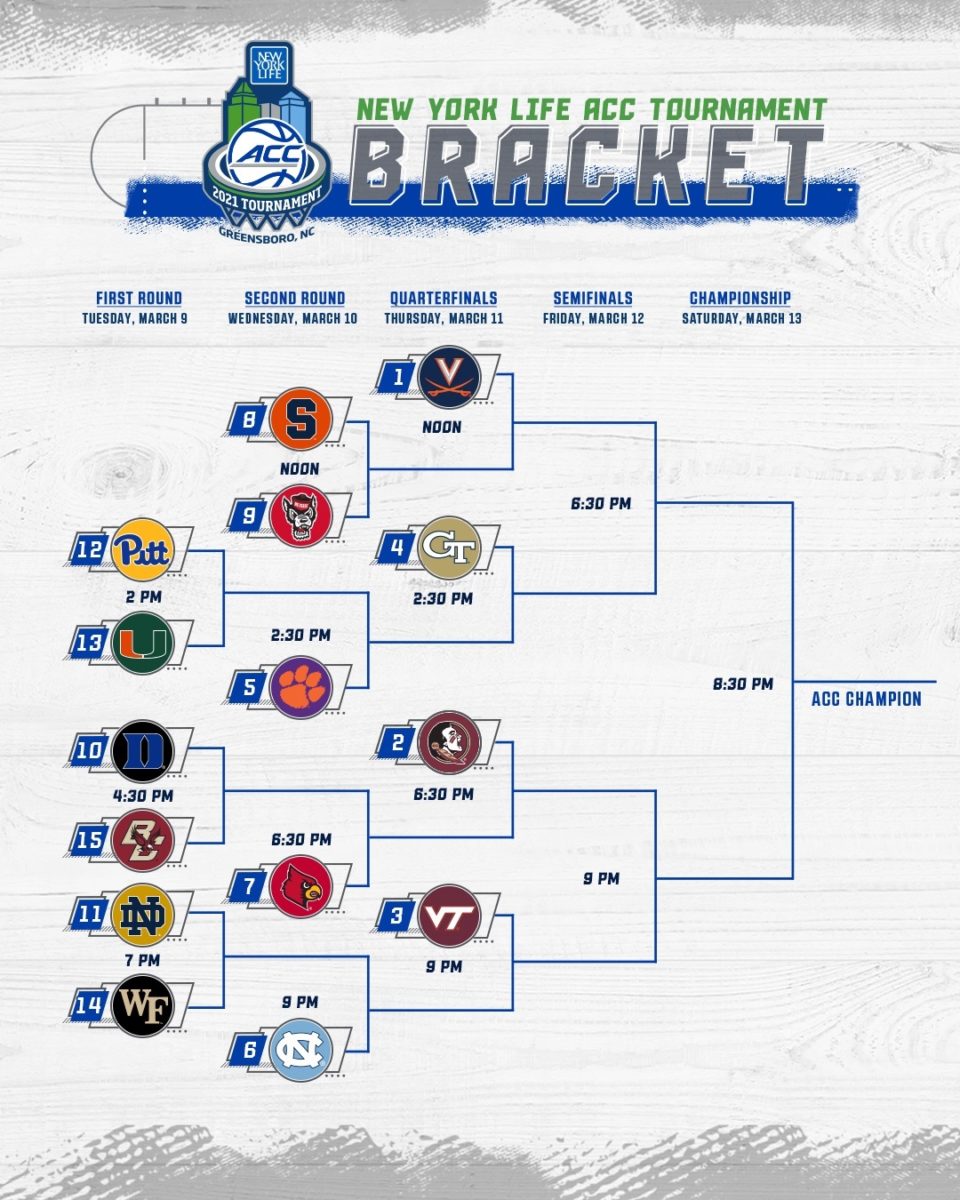 Kerwin Walton G (no relation… he be keepin’ a medium-complected tan); Kerwin is a 6′5″, 2o5 lb., shooting-G. He is a 2019 ‘Sota State Champ’ and a rook-card badminton player on the side (no joke). On the hardwood he has a rep’ for marksmanship; as his really shiny substitute metric of 43.1% long accurately attests. Kerwin also nets you 8.3 ppg, with 1.5 rpg and 1.9 apg. The vibe here is that he can also pass pretty well and defend (1 spg) very well and the 94% FT-shooting only leads the A.c.c. Did Eye mention the gold-medal free-throwing yet? As this kid is a pure sniper and if he continues to matriculate as a stopper and facilitator? There will be a foreign gym home for him.

Anthony Harris, a 6′4″, 190 lb. Woodridge, Va. in-state escapee was also said to be out for the year (left-knee meniscus, St.Nikhon help here too). Well, until he came, back. Back are his sniper-like marksmanship shooting that generated 7 ppg on 43% long and 88% from the charity stripe last year. Now down to 2.5 ppg on 18.2% deep and 67% from the free-throw-line makes you wonder if he came back too soon in linear terms? (as: he had apparently used what looked like a wrap-around gray-shirt season to me… tho’ that does not count this campaign, right?)

6′5″, 2oo lb. Ryan McAdoo -yes, he is related- is an unusual r-Jr. season Florida Gulf Coast University to U.n.c. transfer basketballer. As Ry’ (same as Leaky) has that *it* or vertical look-n-feel to his game as a pure Three or S/F. His poppa-bear {sic: Bob} was merely the No. 2 pick in the N.b.a. Draft, was only the N.b.a. Rookie of the Year in 1973, the Associations’ MVP in 1975 and a five-time All-Star. Senior McAdoo -who was instant offense and rebounding off the Showtime pine- won N.b.a. titles with the Lakers as a player in 1983 and again in 1985. Accordingly, a lot is legacy expected here. (more than his careerist: .2 ppg and .2 rpg (no typo’s) I mean).

Walker Miller is a 6′11″, 235 lb. fourth-season P/F by way of New Hampshire H.S. ball where he put up okay tho’ not necessarily @U.n.c. scholastic numbers. Walker is an honor roll student (UHC.edu props); he basically provides match-up length in relief (.5 ppg, .4 rpg) while not being listed in my preseason preview mags until this very season. (tho’ older bro’ (Wes) did win the 2005 national championship at U.n.c. and you have to wonder if this was a nepotistic take?)

NOTE: the U.n.c. bench does not super contribute all dat… as they have 6 to 8 guys in between 1 and 5 ppg and only one guy north of 3o% from behind the arc off the pine. 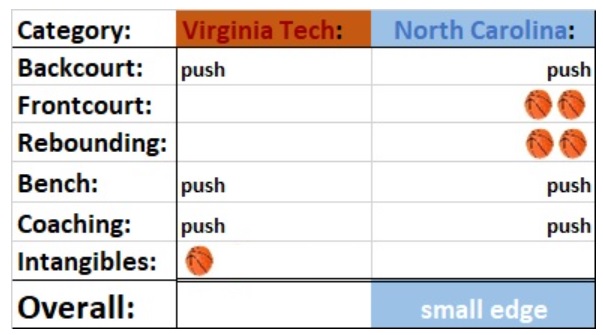 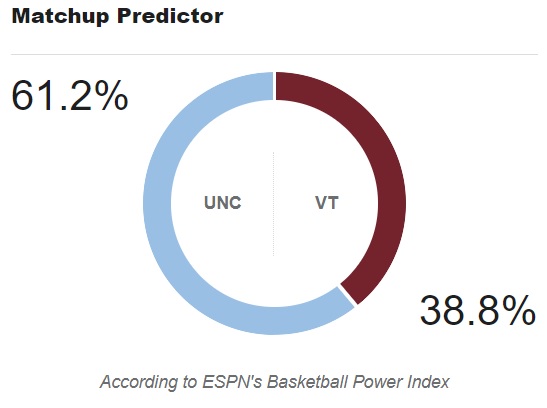 …well, Vegas and a lotta peeps that I know seem pretty taken with U.n.c. after the hatchet-job they just put upside a pretty offensively gifted N.Dame’s head.

…and they did this san their leading-scorer in the All Coaching Conference tournament!

Not too many have the chops to say ^that^’; at least not most post-seasons anywho…

…which leaves you wondering what we will all be saying come midnight Thursday as same as Mars Blackman… “no, no, no, no, nooooooooo-body” that I know of is saying that this is a good match-up for a frontcourt challenged team. A team such as Mike Young’s most likable however well-accepted as overachieving 2020-2021 men’s hoops squad currently 3 through 5 courts.

Our handy-dandy friend the so-called Forum Guide of Graham Houston fame is calling for a bizarro-looking 43-point blue-ball VomiT of an outcome here. When taken pr0-rata this (somewhat) normalizes to a more reasonable 3.58 t.Heel winning tally. That being said… it must also be mentioned that this Forum Guide swung and it swung wildly! What with a mind-boggling six, that’s (6) different games that marginalized to a staggering 27-point swing-vote individually in either direction. As these two teams scatter-diagramed and charted all over the place; literally!

The annualized year-to-date vitals say that… V.Tech is up +2% in shooting percentage margin for the season (+1% both on O & D); V.Tech is also up a decent +6% in 3-point percentage margin (about 2/3rds of which was per O), and yet Nor.Carolina is up +8 in rebounding margin on caroms for the duration. (V.Tech was +4 off the backboard year-to-date; tho’ U.n.c. is truly epic here).

The most recent 5-game metrics say that… nobody is up much of anything in shooting percentage margin of late (as U.n.c. has really improved on D recently); The Gobblers are up 3% in 3-point percentage margin (with Mike and Co. shooting well; tho’ U.n.c. has significantly tightened stop-unit screws here as well) and with the t.Heels now up +9 in rebounding margin in the last fortnight of Windex Wipes (nothing much moved here; the Hokies are still pretty good, and yet the ‘Heels are not less than 1st-best).

Recall this happened last month: “North Carolina forwards Armando Bacot and Day’Ron Sharpe were spotted in videos celebrating with other students without wearing masks. As a result, just a few hours before Monday night’s scheduled tip-off between Miami and North Carolina, the game in Chapel Hill was called off.

That spawned a series of announcements and statements regarding the top. From North Carolina players and managers, a statement read in part: “A number of players and managers — not just the ones shown on the video that was seen — got together to celebrate our win at Duke. Our intention was to celebrate privately within our group. Unfortunately, we allowed several friends who are not members of the team to join the gathering. We were inside and not wearing masks, which were mistakes.”

Or in other words, this is indeed a youthful team in mo’ ways than, sum!

Granted, this may be a middleocore team by Carolina menz hoops club long-view or historic sky-blue standards.

This from the second-most selected Mach Madness franchise team all-time —who most members of the bubblicious bracketologists prognosticenti intriguingly enough… seem to think may (still) be fighting for their spring-broke, hooping; lives.

So, there is ^that^ to well-fabled Nor.Carolina’s tremendous all-time credit.

Tho’ this year you ask?
This year=not so much…

The caveat being… U.n.c. has been in four different single-shot or Deux-shot games going o-fer or zero-hyphen-four for their A.B.C. (always be closing) troubles. They have been beaten by every Nationally Ranked team they have played less one; (F.s.u. a week ago). The squirrely part …is they have been competitive or at least semi-competitive in all of those ranked opponent games. Nobody has really spanked or woodshedded U.n.c., not all year long!

A.c.c.odringly, this is either the little engine that next-years-champions just this year, can’t. Or, U.n.c. just needed some seasoning and some growth between the ears from such much nubile/precocious youth. It really ‘pends whom you ask…

Tho’ if you ask me -and you did via reading these very words- methinks Roy has them rounding into improving shape. Maybe not world-beaters yet, tho’ I doubt today’s U.n.c. goes .ooo in those four close-games; and they might even sneak a Nationally Ranked scalp when you are not, looking. Just ask the Seminole crew from Tally.

As one would not be the quartermaster of the R.M.S. Titanic if one dared to opine that these two do have at least one or two markings of my classical… two ships passing in the night.

We do have a shot here, and that shot is from downtown.

The outside. Where we’ve got to manufacture enough covering points to mask what looks pretty gnarly inside. Because if we played even this seemingly pinnacling t.Heels an Association best 4 outta 7, Mike is heady enough to take one outright and maybe just knick’ another. (per the attempted punny sponsor of this Tourney if you will).

Tho’ G.boro is typically a mini-me backyard t.Heel Gotham more often than not.

And methinks that (sadly) bat-signals one for the sky-blue crew, here.
All-Championship Conference advanced-placement for U.n.c.