Today’s word of the day is… tarnation! 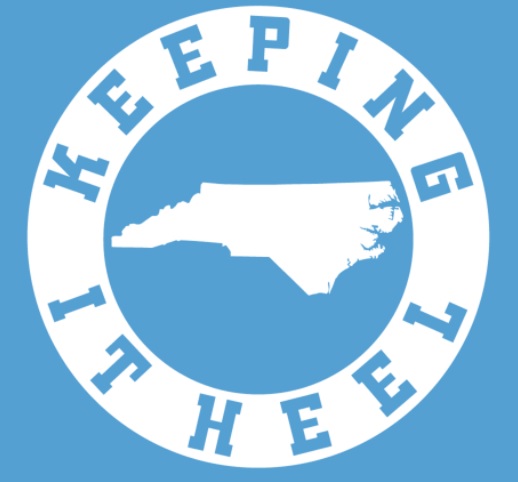 Coach Mack broke into the clipboard for hire ranks at So.Miss and has made a buncha big-name tour stops along the way. Among them would be: Florida State, L.s.u., Oklahoma, of course, Texas, and a previous stint at U.n.c. (1988-97). Coach Brown started out with three negative seasons in his first six campaigns. Then he began a much more positive ascent upwards through the more rarefied coaching ranks. As he got things rolling at Chapel Hill in 1990 and has suffered only one L’ing season ever since. (although he had been retired/outta coaching since 2013). Since returning to Chapel Hill, Brown has started a tradition of lighting the Bell Tower blue after every home win.

Additionally, Coach Brown has authored an 18-year bowl-streak, with 20 straight winning seasons. This with a mere 192 consecutive weeks ranked in the Coach’s Poll to boot. Coach Brown is one of only three head coaches in D-1 history to coach players who recorded a 2,000-yard rushing season, a 1,000-yard receiving season and a 3,000-yard passing season in the very same year (Tx, per V.Young). When combined with his brother (Watson Brown), they compose the pair of brothers with the most combined wins in college football history. And he is already enshrined in the Tennessee Sports Hall of Fame. And he and his family have done more than a lot of community/charity work… in particular in regard to abused children. (God Bless!) 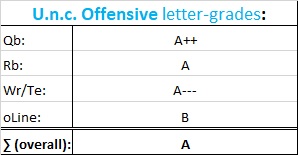 p.s. Eye said this O was a bit more vertical this year, this may not be measurement ‘rong; tho’ me(now)thinks it is “trusting” Howell a bit more this year than before— and that is what you are really seeing upon breaking-tape.

North Carolina is 53rd in Net Punting and so is P Ben Kiernan. Well, unless this is the world-famous C.n.n. type historian Ben Kiernan? Although I could not biographically speak to this— there is a resemblance; tho’ I tangent…

Second-year Ben Kiernan is a 6′-none (or 5′11″), 2o5 lb. Dublin Ireland imported punter. ‘Aye’, he was merely the 11th ranked P in America two years ago by 247Sports. This after winning the pretty prestigious: Sailer’s 2018 Vegas Punt Champion competition to boot. Ben kicked-off and only punted in H.S. i.e. not the typical meta-leg-game P, K, KO all-in-1 specialist. In college Ben’s punting average is about 3-4 yards off of his scholastic mean. Tho’ he is young, he was not ranked ≤33rd best in the nation, and starting out middleocore as a newbie leg-swing guy is not the worst thing I’ve ever special teams seen. Neither is starting out with an early career-long of 64-yards and no punts blocked in his Chapel career to date.

And, Noah has been flooded out… now kicking for U.n.c. would be Grayson Atkins. Gray’ however is not (so far) out-kicking the aforementioned K1, noah.Ruggles. So, you have to wonder if there is a K3 to turn to here in an FGA slumpy, pinch?

If not… Grayson is a 5′9″, 188 lb. mighty-mite little ball of Furman Paladin hate. And Mr. Atkins is also… a first-team AFCA F.C.S. Coaches’ All-American who also merited All-America honors from the Associated Press and STATS F.C.S.  A consensus first-team All-SoCon selection last season who is just not having a 2019 encore legwork performance 2020 effort; or at least not yet. Still yet, 86% for his last two FGK’ing seasons prior to U.n.c. prolly does say more than 50% at U.n.c. says; right? Grayson can Punt, as he only has an 81-collegiate career-long here, and when you marry that to his 55-yard college career-long FG-make, and one Furman game with three that’s (3) makes in one game ≥51-yards you’ve prolly got a pretty fair-to-middling FGK in terms of leg-talent on your hands here. Ditto being a grad’-transfer twice SoCon Academic Honor Roll member to boot. That does not suck… and neither did the South Carolina High School Sports Coverage Chandler Catanzaro’s Top Kicker in South Carolina Award or his raising $5,000 last year for pediatric cancer research. (may St.Nicholas of Myra, *the* Christmas St.Nick’ BTW: and Patron Saint of children, bless)! As history says that some Gray’s Anatomy ‘patience’ is a virtue here most likely indeed. (p.s. it did look like 1 FGA-miss had a strange (tiling) placement to it— as it easily had right at 55-yards on it; maybe closer to 60-yards deep, seriously!)

Special Teams letter-grade: U.n.c. is not testing as high as I expected… like a bored-student who not studying Study Hall. Hence, the lowest possible: B—. (tho’ it feels like it should be, mo’)

Number of heels would be well-heeled @Tech=13 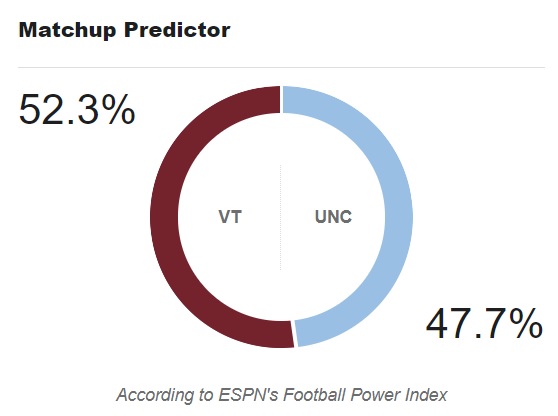 As in… which Qb1 gives you the best possible chance to win @U.n.c. on Saturday?

Neat problem to have, our having so much Pivotal talent and all… although is there a superior or alpha or evening winning Qb1 nod to be had pregame here?

(go’on, tell me all about it down below…)

formulae here favors… prolly does have to be U.n.c. Eye might even R.A.T.T. favor U.n.c. even vs. us under more normalized/vaccinated circumstances 202-miles so-by-so-east down on Chapel Hill.

Or in other words… (debuting/retuning) j.Ham HAS to take at least one thing away here… and with such a depleted secondary he’s just got to stop the U.n.c. ground-assault or else.

(that or VeeTee has gotta go +2 or more in the turnover battle with at least one defensive or special-teams major (TD) in order to keep pace).

#ChallangeA.c.c.epted… there are 1,440 minutes in a day and weather.God prolly needs to win at least 50+ of ’em here for us.

That might be our best look… having to wipe beads of h20 from your O&M optics.

And go’on and lunchroom bully U.n.c. with the Vice Squad.
Stand the heels on their head and shake ’em for all they’s worth!

As there are a few coaching circle whispers of Carolina not loving contact, here.

Will (unfortunately) made an unusually nitrogenitic savvy preview point… Howell rolling plays and forcing young guys who are 2’s or 3’s to make at least 2-3 choices per play out on the edge could be a bad omen indeed. U.n.c. does that and the pressure placed upon guys who should only be facing 2021-2022 pressure’ and not before; may just bubble their sporting psi (pounds/square inch) and depressurize their heads prematurely.

As winning here, with a nobody secondary on the road vs. a surefire 1st-rounder at Qb1 backed up by the #1 rush D in the land?

This would be like transforming the water of the unstable 2018 and 2019 passions into the wine of 2020 unity. Probably even beyond that… as you’d have to hope we get to re-up Fu’ if that is the case. Though there I go again putting the cart in front of the proverbial, horse.

As this one kinda reminds of someone’s prediction of and relative to the 2005 @wvu road-date. Whereby that person said: that we had to knock (then) w.v.u. Qb1 Adam Bednarik outta the game in order to be sure to win. 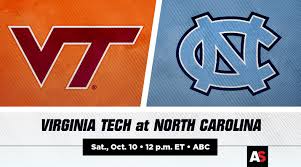 Same diff’ here people, as someone needs to go on and ether Howell AND we must go 4-corners (see: the historic sporting, pun) and let the air outta the Fu’fensive ball— thereby shortening the game in order to be sure who gar-ron-damn-tees VicTory in this contest.

Do this and the good-guys win. Do this not and this one really could come down to… he who scores last laughs, last.

The Hokies are 7-1 @Chapel Hill since joining the A.c.c.

^that^ is nice… this is nicer, or at least more inviting to go’on and test… U.n.c. went 3–6 last season in games decided by seven points or less, dropping those six contests by a combined 26-points. A.b.c. U.n.c. (always be closing).

And if for whatever reason or reasons, U.n.c. lacks that when a cut opens you apply leather Jack the Ripper mentality?

Then it is up to us to turn their mental-screws in our favor in this one.

“Do you have a daughter?
How old are you?“

Neverthemore, I do know that this was one of those rare about ~5% of the time previews where the finish just did wanna congeal. The yeast did not wanna rise on up. An unleavened ending that feels uneven on the kneading indeed.

And for the first time ever it was not because I could not find an anchoring or enticing OPT hook upon which to hang my OPT digits. That’s called Hokie-health here or the (St.Nikephoros bless) the viral lack thereof… duh; right?

It was rather that Eye found getting a literate read on U.n.c. to be, elusive. Like you had to go dig a set of spectacles outta your old-desk drawer and although old glasses are better than no glasses, they are at least two prescriptions behind on being a full spectacle.

As I’ma still left wondering out loud what U.n.c. really is? Because even with 3 ugly/wasteful turnovers and one missed FGA, they jumped out hard-n-fast and still basically whooped Syracuse good-n-hard. Then, they get canceled-out (Charlotte’s web); and then they have two more turnovers and missed another FGA in a game in which Boston College closed better than they did.

Oh, wait… did I mention the weather, yet? Well, and nevertheless, in lieu of that— the t.Heel Nation may just leave us wondering what in tarnation just happened? They are most offensively potent indeed. In particular, if/when they finally come clean on O.

Ergo, therefore to Whit: my only forecast is that it is gonna take a lotta points to put U.n.c. down here.