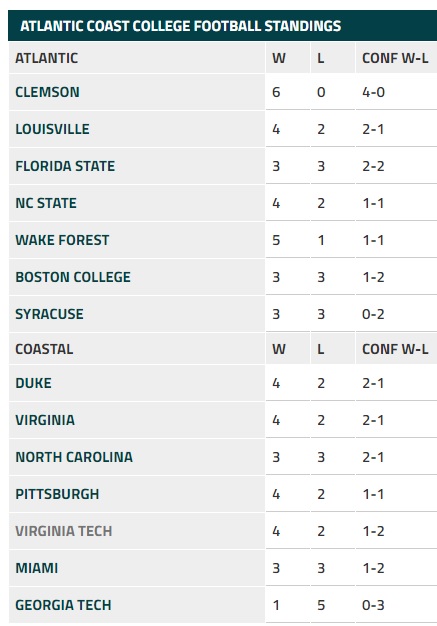 The Hokies are currently not favored; as a 3.5  to
4-point homesteading underdog (VT+4) out on the Vegas big-board for this one here. This is “terror dome” unusual to say the least and unwelcome to nearly discouraging to say the most. As someone has gotta win this one; even if there are only two A.c.c. teams with 1 L or less this campaign. This segues us effortlessly into today’s word of the day…

Today’s word of the day is… a quote…

“There’s room at the top… it’s the bottom that’s crowded.”

Coach Mack broke into the clipboard for hire ranks at So.Miss and has made a buncha big-name tour stops along the way. Among them would be: Florida State, L.s.u., Oklahoma, of course, Texas, and a previous stint at U.n.c. (1988-97). Coach Brown started out with three negative seasons in his first six campaigns. Then he began a much more positive ascent upwards through the more rarefied coaching ranks. As he got things rolling at Chapel Hill in 1990 and has suffered only one L’ing season ever since. (although he had been retired/outta coaching since 2013). Since returning to Chapel Hill, Brown has started a tradition of lighting the Bell Tower blue after every home win.

Additionally, Coach Brown has authored an 18-year bowl-streak, with 20 straight winning seasons. This with a mere 192 consecutive weeks ranked in the Coach’s Poll to boot. Coach Brown is one of only three head coaches in D-1 history to coach players who recorded a 2,000-yard rushing season, a 1,000-yard receiving season and a 3,000-yard passing season in the very same year (Tx, per V.Young). When combined with his brother (Watson Brown), they compose the pair of brothers with the most combined wins in college football history. And he is already enshrined in the Tenn. Sports Hall of Fame. And he and his family have done more than a lot of community/charity work… in particular in regard to abused children. (God Bless!) 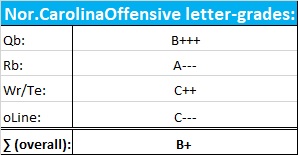 mid-script: U.n.c. has been beat-up under big-Mack. What with 14 different starters out during one point in spring-ball.

U.n.c. is a modest 72nd in Net Punting; and so is P Ben Kiernan. Well, unless this is the world-famous C.n.n. type historian Ben Kiernan? Although I could not biographically speak to this— there is a resemblance; tho’ I tangent…

This nugget or rookie-year Ben Kiernan is a 6′-none (or 5′11″), 2o5 lb. Dublin Ireland imported punter. ‘Aye’, he was merely the 11th ranked P in America last year by 247Sports. This after winning the pretty prestigious: Sailer’s 2018 Vegas Punt Champion competition to boot. Ben kicked-off and only punted in H.S. i.e. not the typical meta-leg-game P, K, KO all-in-1 specialist. In college Ben’s punting average is about 4-5 yards off of his scholastic mean. Tho he is young, he was not ranked ≤33rd best in the nation and starting out middleocore as a newbie leg-swing guy is not the worst thing I’ve ever seen. Neither is starting out with an early career-long of 64-yards and no punts blocked thus far.

Noah Ruggles is a r-sophomoric 6′2″, 185 lb. K from down the Sunshine State way (Steinbrenner H.S., yes it is named for you know who— may St.George bless).

Noah was flooded with more kicking offers than most modern-era specialists; this after he broke basically every single Tampa Bay area kicking record. Noah was not ranked south of 9th best coming outta High School. He was 1st-string AAAAAAAA (ocho-A) two seasons ago and leg talent is not wanting here. Nor is his so-called: “long-lever” look. Think: if Bernie Kosar’s sidearm throw went sidearm leg-load or waist tilt upon the loading moment on the left-leg plant. “long levers” also make miss-hits better, or so the modern kicking theory goes. Right now, in his initial starting K1 year, Noah is 8 of 12 or 66.7%. Basically, two outta three kinda deal for the moment… he has a long of 49-yards thus far. Although Ruggles is said to have a mid to high 50’s leg in the bag. Perfect this season on P.A.T.’s (15 for 15). That being said, Noah has only been hovering right at/around 50% since mid-September as his early Indian Summer hawt-start has dropped along with the early Autumn thermometer.

Special Teams letter-grade: (there seems to be some righteous (although youngling) leg-agendas down on Chapel Hill. 2021 will footwork pretty well for U.n.c. for it. However, the rest of these ‘Heels special-teams are not so special or just making way too many errors. C— overall,
although their pure talent is likely better than that).

Number of ‘Heels who could tar-n-feather @Tech=12

The takeaway here is… when a coach returns for a second stint at a school, it almost never goes as well as it did the first time. The 67-year-old Brown’s 11th year at UNC will come 22 years after his 10th. i.e. there is either a reason(s) he left | or a reason(s) he had to come back.

Still yet, this Big-Mack could (still) be the alpha-charismatic coach in-person in all of college football. The gregarious or anti-Fuente big whistle if you will. And if I am mistaken about that he’s still the beta or ceti charisma merchant at worst. As this guy could sell grills to the Hokiebird for Turkey Day.

Thingy is, Brown also has a hidden meddling rep; whereby he needs to put his finger in every staffing pie. That may or may not be the coming up on 70-years young case, although that is the historic vibe.

Tho’ Mack is a real live neighboring threat to Fu’ and Co. out on the recruiting trail.

As Nor. Carolina had been our lifeline to replenish/restock our siphoned Tidewater backyard.

So, this is a really big game with a whole helluva a lotta intrinsic and extrinsic Recruiting-reach implications on the line for the boarder-war poaching O&M Staff. Not to mention an L here cripples either sides’ Coastal race.

Forum Guide: Our handy-dandy friend the so-called Forum Guide of Graham Houston fame debuts this week… (on a 1-game interval) and is calling for a 4-point VicTory. I also took the time to look at the yardage metrics and they are (actually) calling for 13-point U.n.c. triumph. And on an outlying 5-turnover day, this can only be considered more salient.

Splits: for the year, total rushing +15 {sic: yards} in VT’s favor; all due to a modest defensive edge as rushing O’s are 3′ removed from entirely even. Total passing is a noticeable +70 in U.n.c.’s favor more so due to offensive acumen.

The most recent 3-game splits however tell us that… U.n.c. is nearly +65 aggregate total yards (O+D) trending to the better on both sides of the Line of Scrimmage (LOS). As both their O and their D are improved on the last fortnight of play overall. VT is likewise trending upward, with an improvement of +70 total yards composite. +50 of which are on the offensive side.

Head-to-head, however, paints a vastly different picture… as although both teams have moved properly, U.n.c. is now propping-up a whopping +190 yards of total D plus Total O! That’s a 19 point predictive call there folks, if you are keeping Heel score at home. Despite a modest Hokie run-game increase, the Heels are up an astounding +215 aerial yards when opposing O and D’s are combined. i.e. they are throwing and defensing the throw vastly better than we are in the past 3-games.

Will did something that I liked in his preview… he basically said: here is the lowest number (best case scenario) thus far when viewing these two Coastal rivals through the lens of All Coaching Conference play alone. Very coach Emerson (self-reliant) of Will who used to look like Will Thoreâu in person. (with the pensive beard and all), although I tangent, yet again…

If you take what Will did the nominal single-step further you get a call for a 38-27 t.Hell win.

Me?
Eye hope that is the worst-case scenario.
Then I ran the above splits and the numbers told a different story.
And here I was at least toying with picking VeeTee in the Lane upset…

These are not my proverbial or pet two ships passing in the night… (i.e. teams heading in different directions).

This is an improving retrofitted shakedown cruise Corvette (VeeTee) being passed
by a brand spanking new Lt.Cruiser (U.n.c.). Both are actually on course—
it is just that the Lt.Cruiser is making mo’… steam.