Virginia Tech men’s basketball returns home after a roughed-up putting up in the Jiffy-Pop dome of Syracuse, New York.

The Hokies prolly were due to bounce a bit in horse racing terms. And yet the Hokiebird went less than quarter horse and laid a flat roundball of an egg early Saturday afternoon. Now however we play 5 up and 8 down Notre Dame (and 12th place at 2-5 in the A.c.c.); again. The Irish also being o-1-4 in postponed and cancellations respectively thus far. God Bless. That all said, what you wanna know is… who is gonna win and by how much, right? So, read on to find; out! 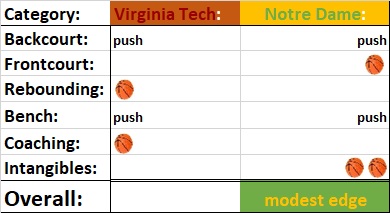 Stanford transfer and last year’s necessary sit-down Cormac Ryan is a 6′5″, 195 lb. Junior baller with rulebook (now apparently) resolved eligibility issues. Tho’ his current So.Bend averages of: 9.1 ppg with 4.1 rpg and 3.o apg per virtually matching 31.5% shooting from the floor and from downtown seem rather rural to me. The rep’ here says that Cromac (cool-name) is a pressure-defender who can shoot and that’s not the worst scorers-table medicine coming in off your bench let me tell you. (UPDATE: ⇔, or a sideways, Swiss or neutral playar in the meantime).

6′7″, 220 lb. final season now gone grad-student eligible Nikola -grate name- Djogo got included here just for his grate name and ’cause I wanted to climb his family tree. As you do not see these two Ethnicities paired together too often. Much less when you see them migrating southward to run ball from the Great White North, “eh“. As Nik’ is a Hamilton, Ontario native and this is precisely why assuming make an ass outta me. (and may St.Christopher bless some more and Nik’ has a history of shooting-shoulder surgeries to boot). That said, Mister Djogo does field a Triple-A OFSAA Championship ring (from H.S. Canadian ball) that I’d bet nobody else who ever meets Nik’ in the lower-48 does. However, the 4.o ppg with 2.4 rpg married to 50% long and 100% FTA’s (limited count admittedly) does not suck. (UPDATE: still has not missed a FTA, modest betterment overall, a slight ⇑ vector for this baller). 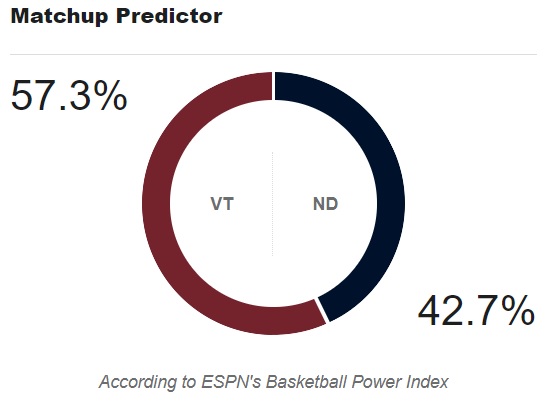 … let’s not go to Sacketts or the Bus Stop or Macado’s any time soon.

As this is NOT a good look on any level; and me fears that this really cuts into our margin of error for a pretty good though not quite legit great V.Tech men’s hoops club. As there were actually two straws there that stir(ed) the drink. And now we are down to one straw (Aluma) —which sucks. As it is hard to conceal just how much this hurts the team on O, on the glass. As we are now down nearly 2-full really interesting off-G’s (including the presence of the absence of Mr. K-State).

You need not be an Ag.School to realize that this is now one tough row to hoe.

The annualized year-to-date vitals say that… V.Tech is up just about +2% in shooting percentage margin (all on D); with no advantage in 3-point percentage margin (as V.P.I. was +4% on D and yet N.Dame was +4% better on O) and the 24060 (zip code) is up +2 caroms in rebounding margin year-to-date (tho’ So.Bend is positive on the ‘glass for the year in their own right).

The most recent 5-game metrics say that… the Irish are now up +3% in shooting percentage margin (virtually all on O); with the Domers up +4% in 3-point percentage margin (N.Dame scorching hawt on O of late and yet VeeTee is a little better in defense of the three), and yet the Hokies are up +5 in rebounding margin in the last fortnight of Windex Wipes (the Irish are positive most recently, tho’ got truly waxed on the glass two weeks ago. Additionally, M.Young’s crew has slipped by –5 rpg on the fiberglass in the last two weeks!).

The vibes say that N.Dame coach Brey says he’s much happier with his club’s shooting (offensive.exe), and his rebounding (efforting), and a little better on his D of late (hustle/”want too”). That does indeed move the St.Patty needle here. This is not the same N.Dame we dumped on with relative ease. (the whispers also say the one Irish thing left to clean up is a few turnovers here-n-there).

And neither are we the same squad as well. (Least we forget… Vah.Tech is now down a cumulative near 20 ppg, nearly 10 rpg, and almost 5 apg between Radford and Mr. K-State both PEACING us out at the off-G slot; for varying reason(s)).

As this preview itself goes… N.Dame (same as Syracuse) seems to be rounding into at least a somewhat more precocious form of late.

Not world-beaters, tho’ today’s Notre Dame prolly beats the Sunday, Jan 10th Notre Dame that we went cruise-control on and beat by 14-points our very ownselves.

To make matters more haranguing… that day’s V.Tech nearly assuredly beats today’s V.Tech for all the ‘rong reasons hinted/mentioned at above.

That begs the -two ships passing in the night- the question of… does today’s Notre Dame beat today’s Virginia Tech?

As Notre Dame has played eight that’s (8) Top-25 ranked teams in their twelveteen goes this year. This two is a tough row to hoe. (having gone: o’fer against said Top-25 teams for their hottest fire ¦ strongest steel) troubles. And further having only been inside of double digits on those nationally ranked marquee contests just twice outta ocho/eight L’s suffered vs. stud-teams).

No bueno on that.
That’s not elite hoops and it was not really all that close more often than not.

The caveat being… Notre Dame is better than that. They have been better of late as well.
They are at home where the All Competing Conference visitor only wins 3-n-10 times historically.

Finally, there are a lotta little things that have moved favorably in the South Bend’s crew’s view. None of which are backbreaking or pick-making in and of themselves. Tho’ four smalls makes a medium and two mediums make a, large.

Ergo, the only McBryde Hall calculus for analysis here is… where is Blacksburg sans Radford?