Virginia Tech men’s basketball returns home in defense of our very own Cassell Coliseum after a dogged rallying chase of the Cardinals that basically got winged at the buzzer and came up one-shot-short. (literally).

The Hokies now host 3 up and 6 down Notre Dame (last-place in the A.c.c. (o-3)). The Irish are also o-2-2 (o-postponements-cancellations) on the year. They were however on a rather rugged scheduling path— what with nearly 50% of their games vs. teams nationally ranked between 13th and 23rd. That’s a pretty tall ask opposition wise as cupcakes in prologue to real-live Conference play this time of year typically go. As these 2020-2021 Fighting Irish ain’t exactly been slipping a lotta incoming punches so far. Nonetheless, what you wanna know is… who is gonna win and by how much, right? So, read on to find, out!

Brey led the Irish to the NCAA tournament in his first three years as head coach (2001–2003), notching a Sweet-16 appearance in 2003. He has led his team to tournament appearances in 13 different seasons at two different schools. He has won six conference championships, four Conference Coach of the Year awards, and five National Coach of the year awards (all for the same season: 2o11). Good for two Elite-8’s and three Sweet-16’s overall. Coach Brey has only suffered one negative (<.5oo) L’ing season in 21 years. And his teams have enjoyed a post-season in all less three months of March. Coach Brey teams attend with an overall skillful, offensive and a shooters marksmanship rep’. 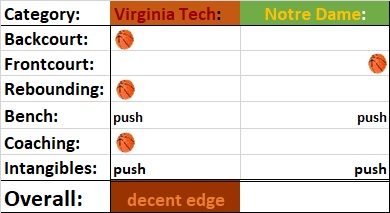 Stanford transfer and last year’s necessary sit-down Cormac Ryan is a 6′5″, 195 lb. Junior baller with rulebook (now apparently) resolved eligibility issues. Tho’ his current So.Bend averages of: 8.6 ppg with 4.1 rpg and 3.3 apg per virtually matching 30% shooting from the floor and from downtown seem rather rural to me. The rep’ here says that Cromac (cool-name) is a pressure-defender who can shoot and that’s not the worst scorers-table medicine coming in off your bench let me tell you.

6′7″, 220 lb. final season now gone grad-student eligible Nikola -grate name- Djogo got included here just for his grate name and ’cause I wanted to climb his family tree. As you do not see these two Ethnicities paired together too often. Much less when you see them migrating southward to run ball from the Great White North, “eh“. As Nik’ is a Hamilton, Ontario native and this is precisely why assuming make an ass outta me. (and may St.Christopher bless some more and Nik’ has a history of shooting-shoulder surgeries to boot). That said, Mister Djogo does field a Triple-A OFSAA Championship ring (from H.S. Canadian ball) that I’d bet nobody else who ever meets Nik’ in the lower-48 does. However, the 3.7 ppg with 2.1 rpg married to 50% long and 100% FTA’s (limited count admittedly) does not suck. 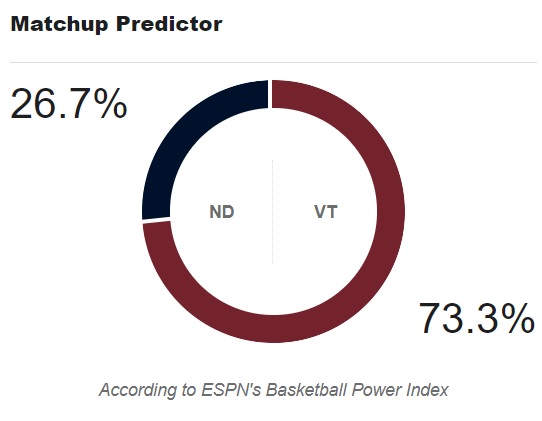 The takeaway here is… honestly, I’m not too taken with what Notre Dame men’s hoops have constructed thus far this season.

Because at least to some measure, Eye too thought they might be doing more. At least say .5oo by now give/take.

And so, did most of my preview mag’s which had Notre Dame picked as an All Coaching Conference centrist type of mid-range (in lieu of their current lowercase) conference ranking pick.

And oh yes, did I mention the look-ahead trap nature of this game with big-bad
Duke on-tap and up, next?

Our handy-dandy friend the so-called Forum Guide of Graham Houston fame is calling for nothing round-robin mutually head-to-head just yets. (postponements got in the way of a good oranges to oranges comparison too— St.Corona bless!).

The annualized year-to-date vitals say that… V.Tech is up +2% in shooting percentage margin (virtually entirely on D); with the teams awash in 3-point percentage margin (per VT +4% better in defense of the 3 and ND +4% better in offense of the 3), and yet Vah.Tech is up a striking +9 caroms in rebounding margin year-to-date (more so on the offensive glass, where ND is really bad and V.Tech is actually pretty good).

The most recent 5-game metrics say that… the Hokies are now up +3% in shooting percentage margin (virtually all on D); then up a resounding +12% in 3-point percentage margin (again; nearly all on D), and up +8 Windex wipes in rebounding margin (about evenly split; the Irish-4 and Tech+4 for an |absolute value| of “8”).

Notre Dame leads the all-time series against Virginia Tech 9-4, but six of the schools’ past seven meetings have been decided by single digits.

And, if you are paying attention at home… so far? Well, so far all of our A.c.c. contests have been decided by 2-shots once; and 1-shot, twice!

This game -at least to me- is where things start to grind on you in the All Conditioning Conference— at least a little bit.

The sugar-high of O.O.C. (out of conference) cupcakes is gone.

The opening ‘rah-rah-sis-boom-bah’ buzz of “A.c.c. play” has now waned a bit as well.

Now is when you have to in-league punch the clock and go to work.

And NOW is when (legit/quality) depth just begins to count the most.

This to me is also where we may need/miss our K.State opt-out kid outta the bullpen and off the pine.

Still yet, the 3-point shooting and rebounding metrics of late make it hard to pick against Vah.Tech @home here.

As something seems to have gone a bit sideways over in South Bend. As they sure seem like an anti-Gestalt Team to me. (or, less than the sum of their parts). As the Irish are 3-shots removed from being a .5oo team.

Nevertheless, this is one of those sleepy-looking mid-Winter trap games.

We should indeed beat Notre Dame inside our very own Cassell.

Although we would do well to go’on and jump on N.Dame early and  often
and get to mid-January just chill-out for it, late.