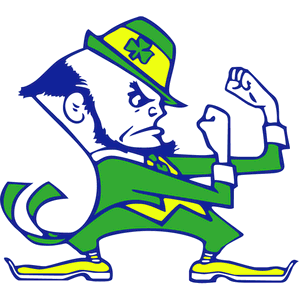 Virginia Tech football hosts Notre Dame on Saturday night down in the New River Valley at 8 pm on A.B.C. In what will surely be the hottest tix to find in Lane Stadium terms in a decade+.

The Hokies are coming off of a true need win down at gamey and formerly nationally ranked Duke; whereas the Fighting Irish enter this contest at 5 up and zero down on the year and with their eyes on the play-off prize —should they run the table. However, the sure to be sky-high like the International Space Station hosting Hokies might want an aeronautical word or three with that. As this one will be a max’ effort from both sides with the national television spotlight shinning big and bold on both teams this weekend. Nonetheless, what you wanna know is… what kinda a R.A.T.T. shot does Virginia Tech have at the mightly Irish here? Read on to find… out!

Today’s word of the day is… up·set

Kelly then went to a pretty well kicked Central Michigan University football program where he only turned C.M.U. around in one year and got to a bowl game in year number three. After that, he was off to Cincy where he posted a seminal looking 36-6 mark including four bowls in four seasons and two New Year’s Day bowl invites with a perfect season in his final (12-o) year!

Coach Kelly then landed most any up-n-coming coaches dream job @South Bend. As the Irish big whistle coach Kelly has gone an entertaining and job-holding .611 overall for N.Dame. This includes a low-water mark or Irish Potato Famine of 4-8 in 2016 and nearly all the vacated wins from 2012-2013 (o-4 official mark; with 21 wins vacated) due to the use of ineligible players. This also included the Sugar Bowl season that climaxed in a dubbing by S.e.c. Alabama to boot.

Daddy Kelly has a wife, Paqui, and three children, Patrick, Grace, and Kenzel. Paqui, after surviving breast cancer, went on to start the Kelly Cares Foundation.
May St.Nektarios bless!

Notre Dame is 41st in Net Punting and so is management school grad’-Sr. Tyler Newsome. Tyler is a lotta thing(s) for N.Dame…  as he serves as the backup KO man and the backup place-Kicker to boot. And being the only mullet wearing P that I’ve ever seen is among ’em. Ty’ is a 3.5-year starter so he is experienced enough not to get cold-foot on the big stage here. He has a career long of 71 yards and has above average leg strength. He has also had a total of 3 punts snuffed out already so you know coach Shibest will be interested in this punter here. And interestingly enough, his scholastic kicking vitals suggested more parts kicker or place-kicker than punter; at least to me.

Justin Yoon is a senior year Korean heritage K for the Irish. He has not missed a P.A.T. in three years; although he is basically a three outta four ~75% probability FG-K for his career. The high 40’s seem to be his punt or long-FGA marker, Yoon does have one 52 yards make for his collegiate long. He is a four year starting K so experience is not a concern here. Justin was rated as No. 1 kicker in the nation by 247Sports and the No. 2 kicker nationally by ESPN coming outta high school. He does have a history of back injuries however and that may have been a mitigating factor as his collegiate FG-make percentage does not seem to commiserate with being named the #1 scholastic kicker in America (God Bless).

Special Teams letter-grade: Special Teams S&P+ Rk: 53rd. And I would have to say that I find the Irish special-teams to be pretty centrist overall; all less KO coverage. Though I did expect more from so many chip recruits. Accordingly, I am issuing C+ letter grade
just because there has to be a freak or three here.

The takeaway here is… that from what I can glean from studying the N.Dame S&P+ overall, O and D matrix, Notre Dame is a football club that has improved each and every week. And that is not something you get to say on a starting point to nearly midway basis very often. As teams bounce up and down a bit more than that. To take that a step further, this very visit to Blacksburg, Va. might just be N.Dame’s toughest remaining game yet; and is surely their toughest remaining roadie on the 2018 regular season docket. Wild, ain’t it?

Or in other words, when you look at the remaining Irish schedule, you see they have a reasonable one, if not a modestly favorable one, which affords them a pragmatic chance at, at least finishing 4th in the four-horse quadratic college football playoff qualifying race. In point of fact, the scheduling indicators I looked at gave the Irish not less than a 59% odds on running the 2018 regular season table. And that does not suck when you’ve played zero Oktøberfèst football games thus far.

That being said, this is a pretty good Notre Dame football squad that is still improving, that does a lotta little to medium things right— nevertheless, it does seem to want for at least a modicum of big-play explosiveness. Which makes me wonder just how much headroom these 2018 Irish have left with regard to their 2018, ceiling?

As one could be forgiven for saying they have the look-n-feel of an uber Duke+++. 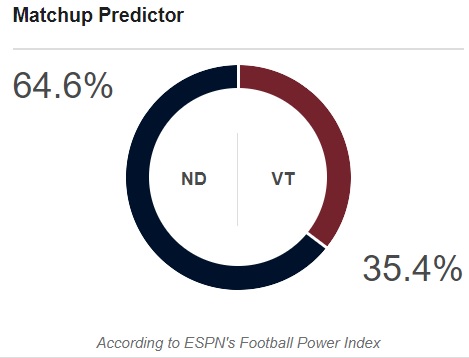 Curiously enough to me, N.Dame is besting V.Tech by a whopping 11 yards per game overall on average— or basically one 1st-down or a single normalized play. That’s all. That’s it. Nothing more.

Still yet, is this gridiron contest honestly and pragmatically that close?

Well, the one thing I am super sure of here is… we/Virginia Tech have GOT to maintain contact.

Keep this game in the immediate vicinity of a 1-score game (TD max’); as best we can for as long as we can until we can..

That is to say until we, Fu’, Foster and Corny can do something about it, and out-fox this Kelly-Green coach, late. As methinks, we do enjoy a headset advantage here. Though we gotta take this one deep into the championship rounds and drown this N.Dame beast, late.

That means making N.Dame play us, our staff, the game-clock, a ruckus Enter Sandman been fueling up for hours, plural, fanbase. And most of all it means forcing the 3-D talent(s) of N.Dame into a 2-dimensional high tension applied sports psyche vice -as the growing betting Vegas point-spread favorite- late.

Or basically true gang-tackling from all things O&M to conspire to team-up and then sneak-up and off and defuse this Irish Car Bomb, late.

…okay so it’s really more like two or three things, though I tangent, and you wanna know how this one is about to go, down?

Honestly, I lotta per se industry insiders -that I do trust- view this as a thinner Virginia Tech team by-the-bye and they likewise/accordingly view N.Dame as one of the few teams that can forcibly burst Fu’s O&M balloon with a pop of big-plays or merely by wearing an initially gamey and salty enough Hokie Nation down in the final 10 minutes or so of scrumming. When and whereby N.Dame will finally crack contain and house a few plays vs. a willing though tiring Vah.Tech.

Hate to say it, however, do not be too upset if that does, happen, here… as I do not like the 4-2-5 hybrid N.Dame defensive schematics, I might just like their dLine match-ups even less and I’m pretty concerned by our rookie(s) on D vs. these obtuse and acute N.Dame run-fits.

As that plus a genuine top-44 Talent disadvantage is a tall, ask…
(just like Cowboy De, Ed Jones, “too tall” indeed)

4-point home betting Fave V.T. needs to do what to win here?