The Hokies are on a… roll! As new role-players, next-man-(step)-up and the beat goes on no matter what happens over in Radford or anywhere else. At least so far… and here Eye had (mistakenly) thought Coach Young a worthy A.c.c. Coach of the Year candidate… silly me. That may not have been nationalized enough. Anyhoo… and after revenue sport sweeping the same… we now draw the Panthers of my hometown Pittsburgh, Pa. Pitt checks in at 8 up and 5 down. (or an even looking .5oo in the A.c.c., 7th place at 4-4 here as well). And o-o-4 on cancellation and postpones respectively. Pitt is not bad; Pitt is not great. Pitt does field a couple of serrated individual offensive pieces. Nonetheless, what you wanna know is… who is gonna win and by how much, right? So, read on to find… out!

Baller Capel ran hoops at Duke University (1993–1997), where he earned a starting position as a freshman and was a starting guard on the basketball team for four years. On February 2, 1995, in the regular-season game played at home against UNC, with Duke trailing 95–92 at the end of the first overtime, Capel hit a running 40-foot shot at the buzzer which sent the game into double overtime. Although Duke lost the game 102–100, Capel’s shot was hailed as one of the most memorable plays in Duke basketball history, and it was nominated for an ESPY Award for College Basketball Play of the Year. Capel’s college career was marked with success. During his years as a Blue Devil, he racked up 1,601 points, 433 assists, and 220 three-point field goals. He finished his career among Duke’s all-time Top 10 in minutes played, three-point field goal percentages, three-point field goals, and assists. Also earning his Duke.edu degree.

(nepotistic) Coach Capel began his coaching career serving as an assistant coach under his father, Jeff Capel II, at Old Dominion University for the 2000–2001 season. In 2001, he joined the coaching staff of Virginia Commonwealth University as an assistant. He was promoted to head coach of the Rams for the 2002–2003 season—making him, at the time, the youngest head coach in Division I men’s college basketball (27 years old). In his four years as head coach at VCU, Capel guided the Rams to a record number of wins (79) and the highest winning percentage (.658) of any Division I program in the Commonwealth of Virginia. Following the 2003–04 season, Capel was named both the Richmond Times-Dispatch and VaSID State Coach of the Year after leading the Rams to their first NCAA Tournament appearance since 1996.

On April 11, 2006, Capel was named the head coach of the Oklahoma men’s basketball team, succeeding Kelvin Sampson. As the big whistle for the Boomer Sooners, Coach Capel had one really sharp Blake Griffin fueled season (Elite-8), made the round of-32 one other time and was spring broke and Merrill Lynch (see: below) scandalized in the meantime. As Coach Capel teams seem to be either: very very good, C+ good or not good at all. (i.e. not a middle ground or WWI type of coach).

Daddy Capel is married to Duke alumna Kanika Réale Blue. They were married in 2003. The two had their first child on April 26, 2007, Cameron Isabella Capel. Two years later, the two had a daughter, Sydney Gabrielle Capel, and three years after that,
they had a son, Elijah Blue Capel.

Pitt at a glance: 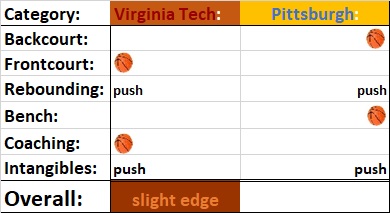 Third-year, 6′, 180 lb. back-up Pt.Guard Onyebuchi Ezeakudo and his rolled ankle (St.Phillip bless) were: “OUT INDEFINITELY” although the x-rays were negative here as this was a bad high-ankle sprain. Tho’ O.E. is now back and back as well as his 1.2 ppg with 0.4 rpg and apg alike. Which is to say his former game does not look fully box-score back to me. As Onyebuchi Ezeakudo had yet to put up any real digits although the tip-end of the Pitt bench and practice rotations are none deeper for the presence of his absence up in Stiller country. As E.O. is a rarefied rotational D-1 power-conference walk-on and that merits his inclusion here.

6′8″, 215 lb., Fr., Abdoul Karim Coulibaly, by way of far far away Bamako, Mali, is a P/F who looks more parts glider or maybe a stretch S/F to me. A.K.C. is a cunning looking Koufax or lefthander who can score on the block and step out to the perimeter. With solid passing ability from the high-post from a kid who balls with great energy and enthusiasm and is pretty dang active on both ends of the floor. Or a still developing energizer bunny off the Pitt pine-squad as every bench needs a Mr. Energy just add P.T. kid— as Coulibaly’s 5.3 ppg and 4.2 rpg on a now up nearly 20% shooting all the way to 53.8% from the floor and a shiny 50% from downtown have really helped Pitt Triangulate and Point things out. (see: the hometown (attempt) at geo’ humor?) Which is an encouragement from a kid with a scholastic defensive and rebounding tag to (now) begin to show a few collegiate offensive flashes here-n-there.

6′10″, 235 lb., last-year, P/F-C combo’ frontcourter Terrell Brown is 2.3 ppg and 1.8 rpg post who did lead Pitt in swat-team work with 1.3 bpg off the pine last year (.8 bpg this year). 37% shooting is not good and down 15% although this is a rim-protector and match-up big not a true box score stuffer. That said, t.Brown and his towering 7-3 wingspan and 9-1 standing reach can still do a lot for you as a defensive rebounder off the bench. (even if Brown’s pretty decent H.S. numbers (including 39% from 3-point-land) make you wonder if more was (eventually) more to be expected here— as he seems to have peaked a few years ago). As this is a rugged interior throwback yesteryear player with a little DET.Piston ‘bad-boy’ somewhere in his man’s game son.

Femi Odukale G and Gerald Drumgoole Jr. G got included here as I wanted a reason to look their bio’s up as Scrabble Point names are fun just like dat. Femi is a 6′5″, 186 lb., nugget or rookie-year S/G, and Drum’ is a 6′5″, 2oo lb., second-season G/G. Femi came up in the Brooklyn and Drum’ came up in the Rochester —both of New York fame. Femi was your No. 145 overall baller by Rivals and Drum’ (who has a history of left-knee and ankle dings/dents; St.Culbreth & St.Phillip help) was your No. 115 baller by 247Sports. Femi was a bit of a high school outburst type of gunning scorer and Drum’ was more of a regular scholastic scorer tho’ he does enjoy the services of a single-A (NY-state) championship bling. Drum’ also enjoyed some football Wr and Fs offers and there are those who thought the oblong spheroid to be his alpha (sporting) pick. Femi nets you 4.5 ppg with 2.1 rpg tho’ he needs distancing work at 16.7% deep. Ditto the Snare Drum’ at 1.4 ppg and 0.7 rpg on 20% long. Still yet, my mag’s say Femi is a quality passer and that all Drum’ lacks is consistency. As more than a little was/is expected from both here… time=tell. 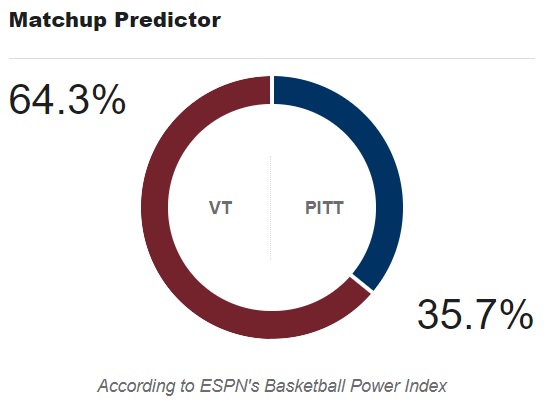 Did Eye mention the revenue sports sweep, yet?

Anyhoo… on to the Pittsburgh Panthers and a team picked bottom-2 or bottom-3 in all my A.c.c. preseason preview magazines.

As we now sojourn nearly 321-miles nearly due North -as the crow flies- to go enjoy some Bimbo’s Pizza, some Primanti sammwich’s and wash those ~50,000 calorie eats down with some I.C. Lyte brew(s); plural.

Pitt is kinda/sorta still rebuilding a bit under the hard or too early to discern J.Capel.

That being said… Pitt could still slot as some variety of a lowercase springtime tournament team.

Which slots north of being spring. broke.

Our handy-dandy friend the so-called Forum Guide of Graham Houston fame is calling for a bizarre-o looking 43-point Tech Triumph. Which even when taken pro-rata still calls for an 8.6 point VicTory. The curious thing was… this was only one team removed (both teams vs. Syracuse) from being a perfectly tilted correlation in the Hokies’ favor straight across. As Pitt handled the ‘Cuse; twice, and once of those two was with ease. Go fig’ here?

The most recent 5-game metrics say that… the Hokies are now up +2% in shooting percentage margin (all on D as the teams are virtually tied on O); with nobody much much of anything in 3-point percentage margin (with the Panthers being up 4% on O and yet with the Gobblers canceling that out by being up 4% on D), and with the Hokies still up +1 in rebounding margin in the last fortnight of Windex Work. (although both teams are still positive off the ‘glass, both teams are rebounding less well of late do observe).

Virginia Tech looks for its sixth straight win in the head-to-head series over Pittsburgh. Virginia Tech has won by an average of 7 points in its last five wins over the Panthers. Pitt’s last win was 2016.

Pitt is a .75o host; whereas VeeTee is .5oo as a guest.
VeeTee is up +4% at the charity stripe for the year.
Nobody is up anything in R&R of late. Even.

Right now… as things stand… Virginia Tech stands in good— or, possibly on the edge of a letdown trap-game of sorts after the first Revenue Sports sweep of hateful archrival uva in a billion years.

Well, and either way… Pitt has a couple of pretty decent looking wins under their whiskers thus far this year. Duke, Syracuse (twice), a couple of Big-10’s. During which they went on a rather sporty looking 8-1 run.

However, in the meantime, they have gone o for 3 run since mid-January.

And frankly, they nearly have the look-n-feel of a team in at least something of a minor decline of late— if not something a bit more major than that. And although Eye am recalcitrant to put my finger exactly/specifically on what is ‘rong here… it does seem rather individualist to me. And Eye do know that Pitt needs this win like a dead man needs a coffin. They need to slump-bust and they need to slump-bust soon enough. As 50% of their games are vs. nationally ranked teams between now and the end of February.

So, the feline row only gets harder to hoe, here.

Nevertheless… Pitt is not our worst match-up, however, being on the All Coaching Conference road however typically is. (3-n-10 odds to win historically, recall). 30% is quite the Pitfall, if you will…

…as Eye’ma kinda still thinking this team is due for a post-Radford bounce as well. As fatigue won’t be diminishing any with a shorter rotation as we get closer to All Championship Conference Tourney play either. Not 1ι (one-iota).

Last year Coach Mike was a .3oo road coach, this year he is a .5oo visitor.

A.c.c.ordingly, you can see the learning {sic: still} curving itself.
And even if @Pitt does not mandate a purrrrrrrrrrfect game?

We won’t be taming these cats with a B— pitter-pat punch.