Today’s word of the day is… a quote!

Head Coach: Manuel Alberto Diaz II: age=45, (2-2 year and overall); has a rep’ for being a good egg as a peep and for being a very industrious long-hours worker-bee as a coach. A defensive magus by trade; very itinerate coach. Really jumps around. The Larry Brown of defensive positions and of U.S.P.S. change of address labels. Tho’ a Linebacking rook-card coach. Really gifted in 2nd-layer terms. An Lb-whisper if there is such a thing.
$3,100,000.oo

Daddy Diaz served as a Production Assistant at ESPN. The last highlight reel he cut was the 1997 Masters. Diaz and his wife, Stephanie, live in Miami with their three sons:
Colin, Gavin, and Manny 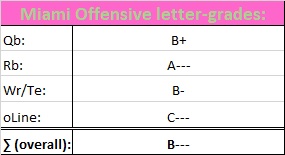 Miami is a reasonable 36th best in Net Punting and so is r-Soph. Lou Hedley. If this Lou shows up on your front-porch to court your inexperienced prize-daughter? Deadbolt the door. Load the shotgun— as this is about as nutty looking of a JuCo transfer and converted Aussie Rules semi-pro inked-up tat’ guy as there is. Seriously. This guy has more neck-in than Queequeg did and a biker-gang apprentice in-training this one has to be. Even JAX of SOA agrees. Lou is 25 years young, and he got his come ups during his eight years as a scaffolder in the middle of the Australian desert! Does the ink act as S.P.F.-55? 6′5″, 238 lbs. of raw imported Aussie lumber. Finally, this is the one P nobody wants to fight. And oh yes, he averages 25 ypc on fake-punts! Lou has a good -if not great- leg, career-long of 59. He was the #1 ranked P according to 247sports and he suffers no career blocks. And yah; Eye do not wanna Rough this Punter, either.

6′, 215 lb. 2nd-year K, Bubba Baxa was rated the fourth-best kicker in the nation by ESPN.com coming outta Texas H.S. football. So he’s prolly used to some pressure(s); although right now he may be feeling a little pressure as his 2 P.A.T. misses are fringe forgivable and yet 55.6% on his F.G.A.’s is generally benchable. Bubba has range into the high-30’s, although he’s not as reliable once he hits low to mid 40’s give/take; (with only one career make >47 yards). So look for some short(er) rugby punts if need be here. Bubba does pull double-duty and KO’s for the ‘Canes, so you’d have to think leg strength should check-out swell enough… even if that’s not showing out in the box score or on his scouting report just yet. That said, Baxa only has one FG-make in the last fortnight of kicking to boot. However, and to be fair, he is 19 years young and we should all ask 2021 back on that. That and he has already faked a FGA on an End-around of sorts.

m.s. Miami hits to the extreme reverberating “echo” of the special-teams whistle.

Special Teams letter-grade: if not for such hot-mess K block business? This is a very talented leg-game lot. However, they really do need to learn how to count outside-in. C+++ sunshine state right now, from what should never be less than a B+++ ST’s unit.

Number of who ‘canes could blow @Tech=17

The takeaway here is… One of Manny Diaz’s first acts as head coach was signing onto Twitter and introducing everyone to #TNM, or “The New Miami.” The Hurricanes are 17 years removed from their last national-title-game appearance and Diaz understands his responsibility to turn UM into a national-title contender. Additionally, Diaz went wild on the transfer market this offseason, adding to the depth chart at Qb, Wr, OLine, De, Dt, and S’s. A true H.R. personnel hiring portaler or the anti-nexus of a Coach Fu’ is you will.

Still yet, Miami has remained a Smothers Brothers routine and continues to yo-yo both in terms of output(s) and focus. So, although the Diaz results are premature, thus far? The So.Beach song remains the same. Miami is not back, and they are not exactly beyond anybody’s reach until they prove that they can play Coach Robert Browning football and that “their reach exceeds (your), grasp”.

Clausewitz stressed the dialectical interaction of diverse factors, noting how unexpected developments unfolding under the “fog of war” (i.e., in the face of incomplete, dubious, and often completely erroneous information and high levels of fear, doubt, and excitement). These all conspire to call for rapid decisions by alert commanders. (that or our latest 2Q of work).

Clausewitz also argued that war could not be quantified or reduced to mapwork, geometry, and graphs. i.e. Fu’s beloved analytics. Clausewitz had many aphorisms, of which the most famous is “War is the continuation of politics intercourse by other means.” 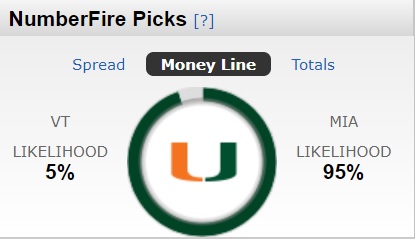 The Sam-side or short-side of our D currently fields the 9th, the 10th and the 11th ranked defenders when taken stem to stern. Guess where Duke just went and where Miami -and everyone else- is likely to go?

Thingy is… the U is pretty muddled if not muddle-huddled over on O. Can what’s left of Bud Bôck do just enough for long enough to keep Vah.Tech within striking distance to make this a 1 or 1.5 play game late and turn a pressurized few screws on the mutually screwy ‘Canes?

Because if they cannot? Or if Bud Lyte big-play taps-out vs. an IsoPPP+ type of 220V Goliath ‘esque N.f.l. Pro’ Day testing numbers skill-position O? We could end up even more Duked-out and cocked up than last week. As Miami is a lotta things -and unlike David- merciful is not among ’em.

Miami does a lotta uber-talented wait-station stoopid stuff upon breaking tape. They mess the bed on Special-Teams misQ’s… the next discipline they display will basically be their first, and they let opposing defensive front-7’s pillage their offensive backfield; at times.

Whereas who knows if Fu’s crew know when this one emotionally tips-off?

Per Clauswitz his ownself…
such is the difference between Realpolitik, and politricks.

“What’s more? Yah GOTTA get it done!”
–the other Coach Saben

That or a Cat’ VI Hurricane this way, comes!
As T.Hill and Co. are gonna lift their hind-leg and mark their tech-a-tory 25/8.

-sans any and all T.O.S.- and “speak truth to the power“. 2019’s Purely Chicken agenda makes no never mind to the R.A.T.T.-tat-tat in me… nonetheless… a funny thing happened along the way to the O&M candy store early on during practice this week.

Numerous sources are reporting that the Henboss is your new Qb1.
(he of the putting a real live “R” into the Fu’fensive R.P.O.’s).
And there are credible suggestions that Fu’ -with Foster’s
full-backing- has gone ALL IN for @Miami this week.

Assuredly, be yea for or against Justin’s retainment; or his termination at will… clearly, The Fu’ture is Now indeed.

And the only thing I know about playing: “all in” cards men?
Is they had damn well better win. Moral VicTories
need not apply.

Well, actually; the other thing I know about “all in” cards is they can only be (credibly) played once— if you do get subsequently beat. Or in other words…

And Fu’ and Co. now need a full-out win like a dead man needs a coffin.
As there are only 27 mo’ shopping days until you know, when!
“boo!“