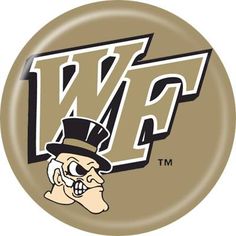 The Hokies now play host to 6 up and 12 down (next to last place in the A.c.c. at 3-12) Wake Forest. The Deacons are o-2-2 on all things 2020-2021 as cancelations and postponements go respectively. However irrespectively enough… they have not had a scratch game since way back in December right before the New Year (or, 12.3o). Not many in the A.c.c. can say they’ve managed to hack away the limbs of a Sweet-16 looking game(s) consecutively this regular season. The ascorbic or irregular part -if you are a Dec’- is that Wake has only managed to hang four W’s in that cycle of typical erraticism. And two of those wins were by a mere three shots, combined. Nonetheless, what you wanna know is… who is gonna win and by how much, rights? So, read on to find, outs!

However, it was over in the Tri-Cities where he really “made his (skull)-n-bones”… what with East Tennessee State Buccaneers having won 130 games and two SoCon championships during his tenure. While all 22 of his seniors earned their ETSU degrees! ETSU.edu love insert (____) here, ✔! While doing all of this… Forbes joined elite company in 2018-19, becoming one of just 10 active Division I head coaches who have reached the 100-win mark in their first four seasons. 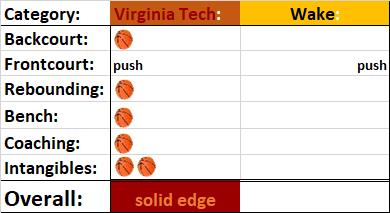 Sophomoric Ody Oguama was a 6′9″, 225 lb. thinly lanky looking Ichy Crane type pointy-elbow frontcourter by way of North Carolina. Who has now gone our and found about 22 lbs. of right-mass and looks more the 220V or “power” Forward part. Tho’ he did prep up in New England and frankly this one was something of a reaching take to me. As the highest recruiting ranking, that I could find was 1o5th (for P/F’s) and 516th, after that. So maybe D.Man’ saw something here others did not? Dunno… tho’ I do know that the offense (8.6 ppg) has upped by 411% … from this maybe still needs to add a little mo’ strength/right-mass Four who is more parts rim-protector/defender at this stage of his game. 5.4 rpg on 50.4% is showing some flashes here, however. Making this an interesting O2 kid come 2023 I’m tending to expect. (UPDATE: rebounding did go up, everything else however, went… ⇓)

6′8″, 220 lb. second-season Three Ismael Massoud is a lean, multi-tasking Spaniard at the Three with a said to be fine shooting-stroke from the outside. 148th in all the land per Scout and pretty much all-anything Massachusetts-wise in high school for the Harlem NYC native. An improving 8.2 ppg with 3.3 rpg on 33.7% long is no bad bullpen shakes. And the Pequod and I both have to wonder where Ismael will be come 2023? Presuming Ismale survives the weight-room, a protein shake and a steak or three. As his length and range could develop into a serial overload at S/F in power conference terms. With no word in yet if coach Herm’ Melville has ‘called’ this kid or not… (UPDATE: not huge ⇓, tho’ mostly down pretty much across the board).

True-C, rookie or nugget-year Emmanuel Okpomo, and sophomoric stretch-F Grant van Beveren F stands 12′16″ combined and weighs 444 together. They combine for 4 ppg and 4 rpg to boot. Okpompo looks like a freakazoid, robot, and android. Literally, almost equal parts; as Lurch called and wants his forehead lugnut back. This dood is a bruiser. A living bowl of mashed-potatoes extra lumpy at that. He was a pure meat-hook enforcer on the #3 in the nation Oak Hill (basketball) Academy after pretty much being the same over in the 3o4’s very own Huntington Prep (W. Va.). Not a scorer, tho’ he can and will bang and there are worse things… and if/when Em’ can develop some real-live O? 1.2 ppg right now.  As I doubt the All-Charmin Conference can handle his physicality. (UPDATE: kinda ⇔, which may not be bad when viewed through the prism of decreasing P.T. or minutes).

G.v.B. is more parts rebounder even if he does not even remotely look the pasty-part. Very J.Crew kid who averaged 20 rpg in high school ball down in the Peach State of Ga. That’s all. He also only has one state title bling, from: Volleyball! As there are those who thought van Beveren woulda
-and maybe even shoulda- picked the other sport. Granted, his Aunt (God Bless), the late Heather Holmes, played volleyball at Clemson and was the head volleyball coach at Wake Forest from 2005-12; mum played college volleyball (Clemson), pops played roundball for So.Methodist.U., and his uncle is only the Director of Scouting for the MLB S.F.Giants. The even mo’ curious part is that Grant is not in any of my pre-season mag’s (at least not fo’ Wake Forest). (UPDATE: van Beveran may be OUT with: “undisclosed”… God bless). 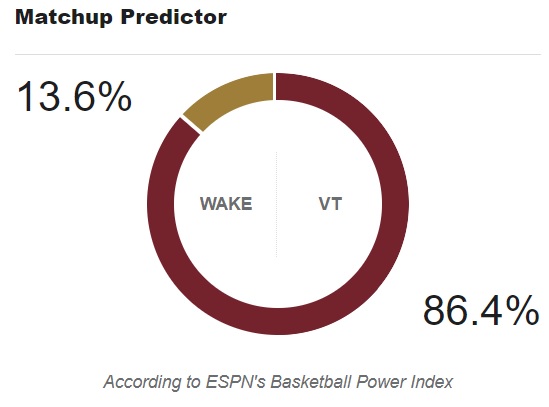 …well, both squads got took last time out.

And both clubs are coming off their season lows as offensive output goes. So, someone has gotta pop clean here, right?

VeeTee got took (53-69) by a top-heavy 3-headed monsta of Gah.Tech —who is very narrow-shouldered below those three handy melons.

And Wake got took good-n-hard by a very solid Clemson Tiger (14-5) squad who defrocked the Deacon O and emptied the Winston Salem collection plate via holding Wake to a season-low of a football-looking 39 points! (that’s a season-low by 15-points if you are keeping score at home mind yah).

So, in horse-racing terms… one of these two teams is indeed due to ‘bounce’.

(which seems rather roundball vs. hardwood mix-metaphorically correct to me).

Our handy-dandy friend the so-called Forum Guide of Graham Houston fame is calling for a whacko looking 73-point Tech Triumph. Which encodes for a potential 12-point and change VicTory dance when taken pro-rata. Odd part(s) being… there are numerous missing data points as both hoops teams postponed round-robin like-on-like crime contests vs. the very same A.c.c. schools. That and Wake was noticeably more Forum Guide competitive in intra-league play early on. (so, hopefully that bodes Recency Effect well enough here for us).

The most recent 5-game metrics say that… the Hokies are now only up +2% in shooting percentage margin (and on both O & D, albeit with reductions in both O & D prowess alike); with the F’n Gobblers now up +2% in 3-point percentage margin (caveat: Mikes D covered his stale longball O, as Wake has been hot behind the arc of late), and almost a bit numbingly, the Dec’s are the ones Good Bookin’ +2 misses in rebounding margin in the last fortnight of fiberglass work.

Although this is scarce to find in the old all-important Win Column, Wake has improved a bit of late; whereas Mike and Co. have regressed a bit of late as well.

i.e., making this one my pet… “two ships passing in the night”.

The caveat being, the lead ship is still a Heavy Cruiser; albeit a straw-bottomed WW1 vintage one. The other ship is an interwar Destroyer.

That all squarely struck?

IF, Wake were only at full-strength… I’d be December 24th toying this the upset pick, here.

Nevertheless, with poor Wake so very training-room (God Bless) dinged-up?
And not so much.

Gotta favor the home-team to hold serve where All Championship Conference teams typically do 3 times outta 10 in historic terms. That and Wake has hit the ‘snooze’ button of late, what with three straight L’s by 21 on average.

Accordinlgy, Cruisers do have higher caliber main guns and I’ma hoping VeeTee shakes
off some rust and cruises to a later-2nd-half VicTory here.