Virginia Tech men’s basketball returns from a runner-up or medalist effort in the made-for-telly Charleston Tourney via getting just barely done out by the hostess with the mostess in the Finals.

The Hokies were upset by what prolly does amount to a minor-league or beta-side post-season club playing in their very own backyard and therefore upon their very own backcourt Prolly makes no never mind ultimately— tho’ will ‘coachable’ moments on the defensive end and on the fiberglass prove subsequent to this VomiT of an upsetting day? Time=tell there… tho’ I can tell you that the other Charleston is checking in up a very modest looking (tho’ .5oo) 2 up against 2 down in Southern living terms. The Buccaneers are typically a lowercase Big South hoops team. Such is the case this year vs. this little man here. Nonetheless, Happy Thanksgiving; and what you wanna know is… who is gonna win and by how much, rights? So, read on… to find, out!

A native of Lincolnton, North Carolina, Radebaugh received his master of arts degree in physical education from the University of South Carolina in 1996 and earned his bachelor of science degree in business administration at East Tennessee State in 1987. Baller Barclay does not appear to exist, the best that Eye and a few bio’ pages can see… same as Buzz Williams and very very few hoops head coaching others.

Radebaugh has a career that began in 1986 as a student assistant coach at East Tennessee State under Les Robinson. After stops at Wofford and Furman, Radebaugh began a seven-year stay in South Carolina.

Radebaugh continued his success as an assistant at Winthrop University, helping the Eagles to back-to-back Big South Conference titles and an NCAA tournament berth in 2oo2.

Radebaugh then spent one season as the head coach at Queens University in Charlotte, guiding the Royals to a 21-8 record overall and a 14-4 record in the Carolinas-Virginia Athletic Conference. There, Radebaugh coached Spencer Ross who was named the Sporting News Division II National Player of the Year.

The next and final stop before CSU would be serving as an assistant coach at Miami. In his one season at the school, the Hurricanes finished 16-13, which was good enough for a sixth-place finish in the ACC and an invitation to the NIT.

Then he gots to Charly Southern… where he took some lumps, then he humped his first hill in 2o11 up through 2o13. Then he found another hump in 2o15. That is two C.S.U. post-season humps vs. 12 (negative seasons <.5oo) in 17 seasons total.

Poppa-bear Radebaugh and his wife, Hope, have three children: Anna, Reid, and Sophia.

6′1″, 185 lb., R.J. Johnson is the other Buc’ that Lindy’s did buck-up to just a bit… pure shooter (≈43% long) and honestly, he may be the only pure shooter in the C.S.U. rotation here. Redshirt Fr.  baller who sat last year and he too looks kinda like a Shooting-G trapped in a Pt.Guard’s body. Tho’… 5.8 ppg with 4.3 rpg on a now team-leading 4.0 apg is a guy in development. And Eye will say this, this kid has some surprisingly strong-looking pipes upstairs for such a very lean-looking B.M.I. overall. Like he was an Ss in football in another life.

Reginald Duhart Jr. is your one frontcourt sub’ who ports with the Buccaneers here. R.D.J. goes: 6′9″, 21o lb., as a springy r-Junior with a history of leg-dings to boot. Kinda a worker-bee or glue guy who does the necessary grunt work as manning the paint goes. 5.8 ppg with 3.3 rpg on 47% overall is about all he is. 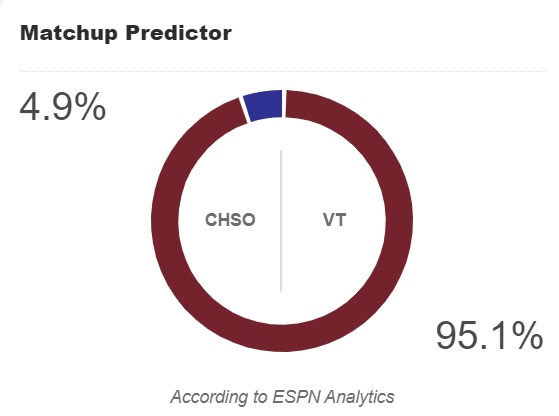 …there not a lot to be taken with here gents.

In all honestly, this is a team we really should beat.
Hostess cupcake “eat them up, yum” …1o1.

Charly Southern basically has one player. He good, and the rest not so much.

And if we let him beat us?

That is not his fault.
That’s… ours.

Our handy-dandy friend the so-called Forum Guide of Graham Houston fame is calling for a December head-to-head (in)common opponent(s) ask back.

The annualized year-to-date vitals say that… VeeTee is up a big ole +15% in shooting percentage margin (VT shooting well, C.s.u. ice-cOld, and below average on D); with VeeTee up a mere +1% in 3-point percentage margin (both chilly squadrons wings have been icing up of late from distance on O), and VeeTee is up +2 caroms in rebounding margin for the season. (VeeTee is just above average and C.s.u. is just below average is what that is code for this time).

The most recent 5-game metrics say that… the Hokies are now up by +13% in shooting percentage margin (per: C.s.u. IS the 4-game same, tho’ V.P.I. slipped just a scosche on each end); the Bucs are now up a shocking +3% in 3-point percentage margin (from: C.s.u. is the quad-game same, and yet the Gobblers are defending and shooting, LESS on both sides alike), and again, nearly shockingly, we see the Bucs now up +3 misses in rebounding margin in the last fortnight of play. (as: V.P.I. has slumped in both O and in D-rebounding a bit alike of late).

You just gotta call for a VicTory dance here.
As the Techmen triumph in this one, the only calc’ is by just how much?

That not going out on the late-Fall thin ice plainly stated…
Eye do wanna see how this reloaded O&M club responds to adversity for the very first 2o22-2o23, time.

Who are the (legit) locker-room Leaders here? Who will work the, we need to offer mo’ than a casual or a domesticated-looking leftover 11ov defense effort vs. anyone real?

Or will our turkeys settle for trying to out-offense everyone and get cooked indeed? 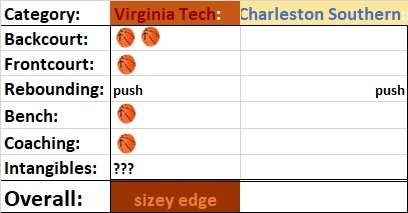 Because this team will be plenty dangerous in Tournament play come March Madness ’23; if/when they get hot on O on quick turnarounds scheduling-wise. Shooters shoot and you want to keep feeding a hot hand. As you need not be ‘cornbread’ Maxwell to know that, that beets a loota peeps in one-n-done post-season formatting.

Although some attention to little things done big would be gravy for Mr. Popcorn himself..

So, wow will they do when their shooting is lukewarm or cools and their wishbone goes ‘snap’ and things have to be contested in hard-fought and hard-won not having your best offensive nite terms?

Thankfully, right about now would be a good and vastly easier and/or safer
outcome pre-A.c.c. time to begin to find… out! 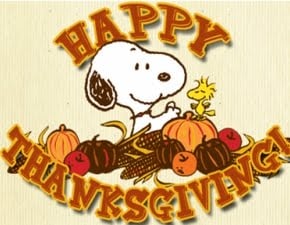