The Hokies have been in a bit of a bull-market of sorts of late and business has been better than good. They now however have to sojourn precisely 299-miles, So-by-So-West to attempt to tame these typically pretty gamey Tigers. Clemson enters this one at an even looking: 15 up vs. 15 down overall and at: 7-12 in interleague play. Or, to put all of that another way… roaring to a homesteading upset victory over formerly nationally ranked Virginia Tech might just catch a post-season by the tail for these Tigers here. Nonetheless, what you wanna know is… who is gonna win and by how much, rights? So, read on… to find, out!

At Clemson Brownell went dancing his very first season though he has only made the N.I.T. twice in the other seven years down in South Carolina. Coach Brownell’s teams have won six conference championships and he has won two conference coach of the year awards himself. All of which were mid-major caliber and therefore all of which was prior to his power conference admission at Clemson. Ergo, therefore, to wit, some would say that Brad is sitting on something of at least a warm seat at the sporting moment. Coach Brownell has already spawned four D-1 coaching tree mid-major disciples, and his teams come with a defensive first reputation.

More was expected of 5.2 ppg, back-up S/G Alex Hemenway (6′4″, 195 lb., third-year)— at least per Lindy’s. As they were really high on his (potential) outside-offensive headroom here. As he was the Alpha Tiger get in his recruiting class three years gone. Does have a very sliced up 1970’s (albeit pasty) face-fro’. This future groom does not cheap on his manscaping look. So, there is that. Although the Hoosier State’s hoop crazy star has a history of dinging and denting type of ankle-rolls (St.Phillip bless). And these have (sadly) limited his role here. This guy is prolly your X2-factor. As Clemson, Sc. really needs his outside pure-shooter work; as 39.9% in relief is not the worst work if you can get it. (Which, is entirely +o.6% ahead of his ‘location location location’ or overall shooting-range gone real-estate axiom if you know what Eye memes…) Did Eye mention the face-carvings just yet? As this kid could borrow Coach Pry’s signature brown leather Shaft jacket and get away wif’ its.

Naz Bohannon is a thumpy looking: 6′6″, 232 lb., overload at the Three or the S/F spot. Final-year baller… truly. This is a can of Campbell’s chunky beef-stew-built kid. Naz be dropping you: 5.8 ppg on 4.2 rpg and 1.8 apg as a substitute teacher for the Tigers hardwood-working class. 50% long really bends your eye here… albeit on two mo’ 3-ball attempts this year than you and I combined! Still yet, the 54.9% from the floor does fingerprint at least a little bit of a skillset in addition to Bohannon’s ground-round frame. Naz is a: Youngstown State transfer baller, who put up a whopping 17 & 8 (ppg and rpg) last year. Lindy’s says this Naz is something of a Baltic Ave. man’s mini-me Point-F or orchestrator of sorts— in addition to the brute size/Newtonian Mechanics approach. 2nd-team All-Horizon League for it says to: ‘agry’. The Tiger can indeed take your two to land his (uppercase), one. Not a kid anyone is gonna be in any hurry to check at your local Y.M.C.A. in a year or two.

BONUS:
Most white-bread I’ve seen on tape in the A.c.c. in a looooong time rises here. 46.7% of the caucasian persuasion if you are keeping score at home. 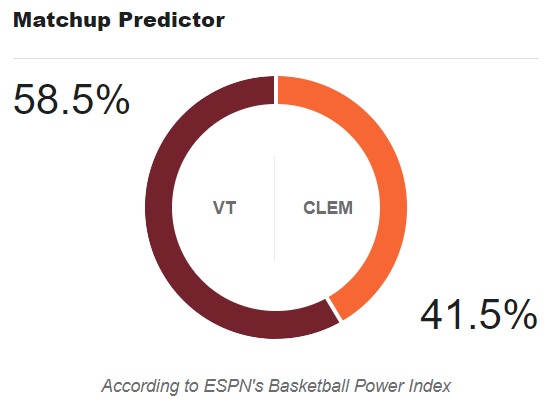 …that in order to be taken with this Clemson squadron being sprung for a tourneying spring-break of any sorts, they prolly needs a win here.

…mutually, in order to be taken with this Virginia Tech club being sprung for a NC2A tourneying spring-break of any sorts, they prolly needs a win here.

Thus, making for a hearty, needy, or ovulating type of game for both teams, girlfriends.

As each group needs a win here like a dead man, oh never worldwide, mind.

Tho’ do mind the store that although we are the rightful favorite in this one, it remains to be seen if we could take a recently improved Clemson’s A+++ best shot ‘bang’ on our visiting road-warriors chin.

As Clemson may not be a great team, tho’ Clemson @home has been good enuff.
Ditto historically, Bradley teams are typically Bentley’s, @home.

Our handy-dandy friend the so-called Forum Guide of Graham Houston fame is calling for a mere +45 or Cyrus Lawrence looking point-tally of a VicTory. Or, a basic umpossiblity itself. Taken per capita this worked out to a more normalized looking near trifecta or 2.8125-point Tech Triumph here. The zinger(s) being… it was calling for a mind-bending +78-point VicTory until Clemson got its swagg back two weeks ago. That, and this is the zenith of head-to-head roundball round-robin Forum Guide comparisons. Or, of data-points max’ as the annualized statistical population (regular season) goes. The last game of the year has everything behind it included. Including the fact that Eye took the time to compare away oranges to home tangerines— when Venn Diagram overlaps are available. How you likes dem apples McBryde and Campbell Hallers? As Clemson was semi-competitive in Forum Guide terms at each bookend, and in the middle not so much. 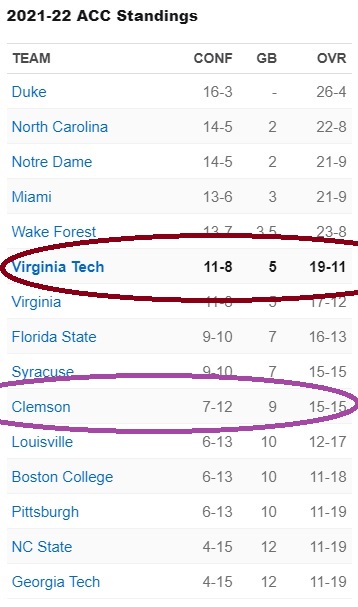 The annualized year-to-date vitals say that… VeeTee is up +1%-n-change in shooting percentage margin (all one of it on O, as D, is nearly gridlocked); V.P.I. is up an okay +4% in 3-point percentage margin (seventy-five-percent of which was on superior shooting on O), and yet these two (virtually) tied one another in rebounding margin year-to-date as annual Windex Wipes go. (With both bunches hovering right at +2 to the good in misses’ collection or backboarding this season overall). Not a whole whole lot to see here seasonally, just a bit of a Vah.Tech 3-pointing-advantage and not much science-fact else.

The most recent 5-game metrics say that… recently the Tigers have now gone up +2% in shooting percentage margin (+1% better of late on O & on D alike); with the Tigers now up a kinda useful looking +5% in 3-point percentage margin (little mo’ on O as our 3-pointing has dropped to a near crotchety 28% of late) and yet now the F’n Gobblers have moved up +2 caroms in rebounding margin on the fiberglass in the last couple of weeks. (Puuuur, the Tigers have gotten slightly dogged on the offensive glass in recency effect terms).

STREAKING 1o1:
In this one we see two teams, both riding three-game winning streaks entering the regular-season finale.

The Hokies have been particularly hot of late, having won nine of their last 1o, and are coming off a lopsided 75-43 victory against Louisville.

Thus, these two are a nifty looking 6-nil in their last 15-days or fortnight+1 of play combined.

The data-mining curious thingy being… Clemson beat Gah.Tech by 1-shot and VeeTee beat Gah.Tech by 1.5-shots. After that… Clemson has looked just a little more demonstrative; beyond the home-schooled blowout vs. a Louisville team that was clearly ready, willing, and available raised to the obvious power to turn their jersey’s in and hang their 2o22 jocks, up.

Two teams hoping to continue late-season flourishes will meet Saturday afternoon when Virginia Tech visits Clemson for an Atlantic Coast Conference closing contest. When the Hokies (19-11, 11-8 A.c.c.) visit the Tigers (15-15, 7-12) in the regular-season finale for both squadrons.

So, while writing this preview, Eye honestly went from the better -and prolly hotter team as well- should have enuff thermodynamically left to warm to the All Championship Conference occasion right as rain in this one here.

Even though the visitor only wins about 3 in 10 visits historically road-warrior gone road-weary home is where the heart 7o% is A.c.c.

That squarely struck… the deeper I got into all things Clemson; and noticing their improved play of late in their own right- I kinda got to wondering if the Tigers have just what it takes to dirty this game up and gum up the works in this one here?

Clemson is NOT a great team. They have been clipped eleventeen times in intraleague runs since last year {sic: 2o21} for a reason(s).

They are however rebuilding and just barely good enuff to rival us on one of their better nites. As five of those 11 Ls were by 2-shots or less, and 4 of those 5 were by one 2-point shot or less.

And yes, if my Aunt Kim had nutz-n-a-bolt she’d be my Uncle… Tim.
Granted.

Tho’ these Tigers held the line and did not spit the 2o22 bit when lesser men woulda packed it in. 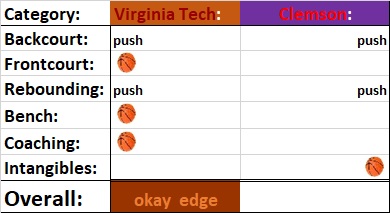 That tells me and the L in Space Robot that there is at least a little: “Danger” here.
I do favor VeeTee to still win this one.

Tho’ I’ma not betting the house, the car and stealing thy neighbor’s dog and betting him too.
The caveat being, those other 6 of 11 times and the Tigers got tamed by double-dights.
(And I’ma predicting this based upon their P/F-stud being short-circuited here).

Ergo, therefore, to Whit… the start=the finish here and it would be
best to go’on and finish these Tigers off from the start.

You let them hang around early on and they may hang up on you to close.