The Hokies are gettin’, rolled. As in o’fer two downhill and chicken-little and Eye have two craniums between us that are mostly… cloudy. That attempt at a rather tryst New River Valley mid-Winter warming trend of late satire aside… …the Hokies are not in the best place right now. Looking vulnerable, looking less (Roster) available, and frankly, they do not look as gritty nor as (outside) shooty as last year’s All-Championship Conference squadron did. Now, we catch a rather sprite-looking 11 up against 3 down Clemson right in the 1.oo in-conference-calling (A.c.c. 3-o) face. These Tigers are always squirrely to tame and they basically play a BeeCee+++ or a Wake’ish brand of ball. Nevertheless, what you wanna know is who is gonna win and by how much, rights? So, read on… to find, out!

At Clemson Brownell went dancing his very first season, though he has only made the N.I.T. twice in the other seven years down in South Carolina. Coach Brownell’s teams have won six conference championships and he has won two conference coach of the year awards himself. All of which were mid-major caliber and therefore all of which were prior to his power conference admission at Clemson. Ergo, therefore, to wit, some would say that Brad is sitting on something of at least a warm seat at the sporting moment. Coach Brownell has already spawned four D-1 coaching tree mid-major disciples, and his teams come with a defensive first reputation. That and he has snagged two NC2A post-season pennants of late plus two mo’ National Invitation bids.

More was expected of 5.2 ppg, backup S/G Alex Hemenway (6′4″, 195 lb., third-year)— at least per Lindy’s. As they were really high on his (potential) outside-offensive headroom here. As he was the Alpha Tiger get in his recruiting class three years gone. Does have a very sliced-up 1970s (albeit pasty) face-fro’. This future groom does not cheap on his manscaping look. So, there is that. Although the Hoosier State’s hoop crazy star has a history of dinging and denting type of ankle-rolls (St.Phillip bless). And these have (sadly) limited his role here. This guy is prolly your X-factor. As Clemson, Sc. really needs his outside pure-shooter work; as 39.9% in relief is not the worst work if you can get it. (Which, is entirely +o.6% ahead of his ‘location location location’ or overall shooting-range gone real-estate axiom if you know what Eye memes…) Did Eye mention the face carvings just yet? As this kid could borrow Coach Pry’s signature brown leather Shaft jacket and get away wif’ it. That, and he can flat out shoot the rock. On a near brilliant 50% trifecta tear recently this year). As Alex is a pure spot-up shooter, (not a dribbler). Catch-n-shoot, tho’ his ranginess is most receptive here. As Alex’s range is the gym itself. If he is in it he is… open. Big miss (pardon the bad pun) from deep for Clemson if Alex cannot go in this one here.

6′7″, 23o lb., Ian Schieffelin is a strapping Three or S/F for Clemson in his second-season. Ian cut a mind-numbing twenty percent, that’s (2o%) body fat in the off-season. Yah; Jen’ Craig and I’d both have to say that that, counts. Ian’s 5.6 ppg on 3.9 rpg with 1.4 apg in substitution count as well. Only his one outta four or 24% long-range is hard to count on. The book here says that Ian is a: ‘versatile’ and a ‘tough’ baller. His dossier says he has an AAAAAAAA Ga. H.S. bling. The book also said this multi-sport athlete got some multi-sport college sniffs beyond basketball itself. So, all-’round athletics Mr. Schieffelin gots as well. He was also something of a late Vah.Tech recruiting snub; and Ian kinda has the look-n-feel of a balky Point-F at times to me on film. Not quite a ‘tweener, more like an athlete who lacks a home-position definition. Although, this does service his scoring from all 3-levels: (inside, mid, and long-range). A useful overall kid, the only wonderment is… is he more than that?

Ben Middlebrooks is a big ole, Four or P/F. Bennie goes 6′11″, 242 lbs. in relief upfront down low for the Tigers. Benjamin is a sophomore-season baller, who finds his way to 3.2 ppg with 2.6 rpg and a steal and swat off the bench. 158th baller in the land from 247Sports outta high school. Where big-Ben dropped you 20 & 15 (ppg and rpg) on the reg’. Another VeeTee lookie-Lou recruiting-wise. His big sis’ (Mackenzy) was a Tennis star for the Tigers. Whereas, Ben is said to be a skillful big who moves well without the ball and enjoys footwork and hoops I.Q. ppg alike. Lindy’s says he is a: “high motor guy though still raw”. That says to check back in 2o25 to me. Tho’ nobody hates a legit big who is not the enemy of preparation, perspiration, or work itself.

BONUS:
Most white bread I’ve seen on tape in the A.c.c. in a looooong time rides here. Fiddy-percent, that’s 5o% of the caucasian persuasion if you are keeping score at home.

DOUBLE BONUS:
This is a big tree fall down go boom bench. Towering, nearly; although shooting or marksmanship they ain’t so heighty on. Pur these sub-in Tigers only netting 28% down to 18% and then three, that’s (3) guys who have not made a 3-pointer off the pine in all of 2o22-(’23) thus far. 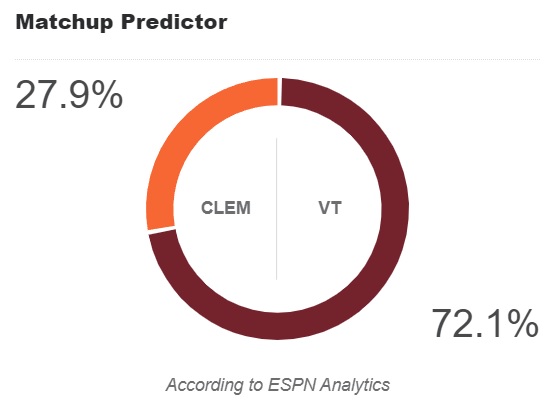 …although to some extent; Clemson’s docket is not exactly murders row {sic: their schedule}.

They are however just two, that’s (2) shots removed from being a one-L hoops team.

And there is something to be said for that, S.O.S. (strength of schedule) water-cooler arguments aside.

Meaning: …the R.A.T.T. thing(s) to say are… the Tigers are indeed a good hoopz club.

The only calculus is… are they a great one?

As they are surely a post-season one of some measure or another.

Our handy-dandy friend the so-called Forum Guide of Graham Houston fame is calling for a stunning (tho’ single shot roundball round-robin) 22-point VomiT in favor of Clemson here. On only one data point thus far. Ergo, therefore, to Whit; I hope that points something missing in comparative population data points out down the road. Tho’ it does not bode well if we take the Wake Forest match-up prima facie.

The annualized year-to-date vitals say that… VeeTee is up a nominal looking +1% in shooting percentage margin (due to: VeeTee being slightly better on O, tho’ Clemson nearly negated that by being slightly better on D, two pretty dang even teams here); Clemson is actually up +2% in 3-point percentage margin (from: a bit better 3-ball range mostly) and kra-kra enuf, these two tested exactly even in rebounding margin for the duration. (Tho’ VeeTee is a mite better off the O-fiberglass per se…)

The most recent 5-game metrics say that… the Hokies are now up +3% in shooting percentage margin (per: Tech is shooting less, tho’ everything else has moved in VeeTee’s favor on both marksmanship sides. Including a much saltier overall O&M D of late), nobody is up anything in 3-point percentage margin (as: both are +5% to the good of late. Tho’, VeeTee is shooting less and defending mo’; whereas Clemson is nearly the same on 3-pointer O & D alike Recency Effect compared to annual returns), and Clemson is up +6 caroms in rebounding margin. (Pur: the Tigers are improving on the O-glass, whilst the Gobblers are coming up short on the O and on the D-backboard alike of late).

Crunchtime: ab-works, sit-ups:
Clemson is o-2 in games decided by less than 4 points.

“Those who do not learn from history…” —Winnie Churchill
Virginia Tech leads the series with Clemson 23-17, with wins in four of the last five meetings, including a 76-75 victory last March in the A.c.c. tourney quarters’. When Darius Maddox made a 3-pointer at the buzzer of overtime.

…from and continuing the S.O.S. supine up above, one other thingy struck me when I began my Tiger-time homework for this one.

Clemson has not exactly punked most of the lesser teams they have faced. (Sans Richmond who they did “run on” indeed).

Recall… none other than Jerry West teaching me and my shortie peeps in Traveling All-Stars Camp as, well, shorties… that “one of the two signature signs of truly great teams is… they beat the teams they are supposed to beat and they beat them badly.”

Blowouts, due to the objective Talent imbalance are what The Logo was ‘on’ about.

Why is that wanting/lacking here, however? 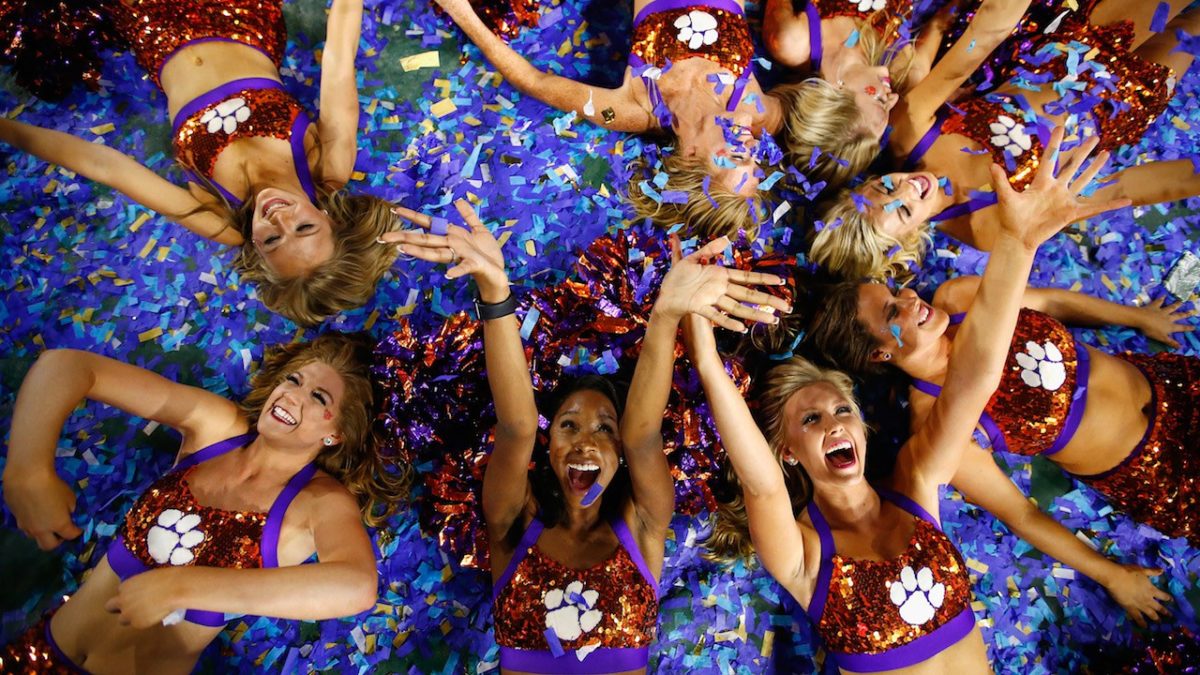 Catch a Tiger by the Tale…

Well, Eye dug a little deep in my attempt to catch this Tiger(s) by the… tale.

And all told… Clemson has played in some very Sleepy Hollow-looking gyms thus far. Like right at 5,000 peeps or fewer gymnasiums thus far eleventeen times so far on the season.

Yawning Festivals for coach Ichy Crane and for you and for me all three.
With three of said Sominex Gyms populated by barely 4-dights worth of attendees.

Do you see what Eye means?
Not exactly punk people or feeling your flow or catching your sexxy environmental runs.

…this leaves me wondering ‘out loud’ if that is all this really is?

…so, in closing; basically, what we see here is what?

Well, if you asks me -and you did via reading these very words- if you asks me what you sees is… a defending Champion that is unused to having to defend much of anything itself.

So, Eye did what I do’s best… I went to look this up, right?

Thingy is… Vah.Tech defending Another Conference Champion lacks or wants for data-points all together. Only Coach Chucky Noe (196o) and Coach Moir (198o) know where I am about to go. As in… our two and only (2) conference calling titlist prior to last spring, got sprung for –11 games in defense of said title(s) combined. Both enjoy pretty fair-to-middling rosters in return mind yah.

Or… in other words… it sure is a different game when you are everyone’s A-game punch and they are easy, turnkey, emotional Christmas cookie cutters higher than the International Space Station to play you when you show up. (We found this out in round #1 of ’85 vs. a nearly maniacal jumped-up North Marion. An 11-win playoff team ‘plum got after us’ … as they hit and kept on hitting the defending champ (us) in the mouf from the very first ‘ding’ of round no.1).

Methinks… which is to say mefears… Mike Young’s 2o22-’23 defending champs are not (yet) up to matching the incoming Always Championship Challenging intensity. At least not @Away. (@Home, and the Cassell vassals can lend a vocal hand or three).

Or… in final words… we need jersey-leadership {sic: baller(s)} and coaching/mentoring the verb… to get this point across, STAT. You are everyone’s A-game, A-nite, A-day, A-date… 25; 8.

We gotta rally to the science-fact that defending (i.e., a ring) is much sizier than the lay-up gone layaway of shopping for said ring. (In extra particular out on the road when: “the Champ is here”! (As: Jadakiss sings).

@Clemson and I’d prolly have to take the Tigers.
In the warming 24o6o and frankly, this one takes a coin-flip to me.

Nonetheless, this one left me wondering about my pet saying of: “two ships passing in the nite“?

Or are the whispers of this 2o23 being less: ‘physical’ to be taken fo’ real?