Virginia Tech men’s basketball and Coach Mike Young play their first final home game of the year ever on a mid-week date vs. the team they (surprisingly) began the year against.

The Hokies now field 15 up and 13 down and (same as us) struggling to manufacture post-season assuring wins Clemons on at 7 PM on the ACCNetwork (check: local listings). The Tigers attend at a useful looking .5oo (9-9) in All Coaching Conference terms; good for an unexpected 5th place in interleague terms at the moment. On top of that, Clemson has been better of late— some might have me opine much better of late. What with having caught two Top-6 ranked Tigers by the tail in clawing their way to four W’s in their last five. Nonetheless, what you wanna know is… who is gonna win this one and by how much, right? So read on… to find, out!

(READERS note: there is NO basis for or of in-season comparison, as we did not have any 2019-2020 regular season stats to baseline (pardon the pun), to begin with!)
(tho’ Eye did re-scout and update, and then made notes accordingly)
{/HTH’s}

Trey Jemison is a legit Five or true-C, at: 7′, and 256 lbs. of sophomore-season paint-sized bulk. Though Trey currently fields a rep’ as a rim-protector and glass-swiper and not a whole lot else. As 33% shooting on a square-foot basis modestly good for .4 ppg thus far that needs some tradecraft love. That plus a year dropped to a knee-surgery (St.Nikon bless some more) and you have a kid who is off-schedule in terms of his hoopology development. Tho’ you also have a kid who was: a four-star prospect coming up scholastically, as TeeJay was ranked No. 1 in the state of Alabama and No. 12 in the country at Center, according to ESPN.com. As the body looks most wiling, strong, fit/trim looking real-deal Five with an 82″ wingspan. Plus Mr. Jemison knocked down a shiny 3.75 GPA as a member of the National Honor Society. CU.edu props on dat! Tho’ the athlete in “student-athlete” really does need to take the proverbial: “next step(s)” here.
(UPDATE: Jemison’s 1.7 ppg with 1.8 rpg and 50% shooting are actually up from last year, tho’ you have to think CU wanted more to drink from this Jemison, ⇔)

Paul Grinde is a whopping 6′10″, 300 lb. (listed weight) roster member who is not listed on every single roster I visited. This makes one wonder if he is really (still) listed @Clemson, Sc. or not?
(UPDATE: “survery says:” Paul is there!)

Paul is a Va.Beach escapee who -in addition to being one of the few human-beings even pastier than me; as the only place Paul, Yeti’s and I can hide is in the… snow- Paul is an extremely rarified D-III (Vassar) transfer big-man who put up 14.1 ppg, 6.7 rpg, on 56% overall and a nifty to the point of surprising 49% 3-ball vs. lowercase competitive teams. How well this all translates for the pretty dang round looking though obviously skillful Grinde in All Competitive Conference terms remains to be seen/proven.
(UPDATE: 1.5 ppg with 0.3 rpg, with not one swat on 62.5% is middling at most, ⇔)

Though either way, he and Tery conspire to give Clemson a considerable big-man edge downstairs in the paint.

Adding in:
Hunter Tyson is a second-year, 6′8″, 211 lb. frontcourt combo’ who looks longer than his listed height to me. Even if he prolly plays more of an S/F type of game as more of a stretch-3. Hunter leads the pine-squad now with 5.5 ppg and 3.0 rpg in relief. And when you back-calculate that he only gets 13 minutes per game and change? Those digits are all the more impressive. This from a kid who was only ranked 34th in the nation at the Three spot while dropping nearly 30 ppg in high school. While being whispered to be a versatile Swing though not a good-shooting one.

6′3″, 180 lb., rookie year, combo-G Alex Hemenway is a real-live substitute 3-point shooting threat at a team-leading 48.6% from behind the arc. 5.1 ppg with 0.9 rpg and 0.4 apg tells you precisely what Alex checks into the game to do, shoot! As Alex may have been a bit overlooked coming outta the basketball bonkers Hoosier State at a relatively mere 21 ppg per se. (only rap I found was the need to hit the weight room this off-season, tho’ you can’t coach pure shooters… interesting 2023 prospect in my book). 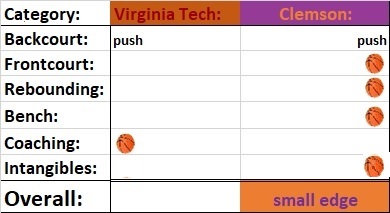 The takeaway here is… well, for two teams that seemed quite similar when we saw them hardwood scrum against each other last? 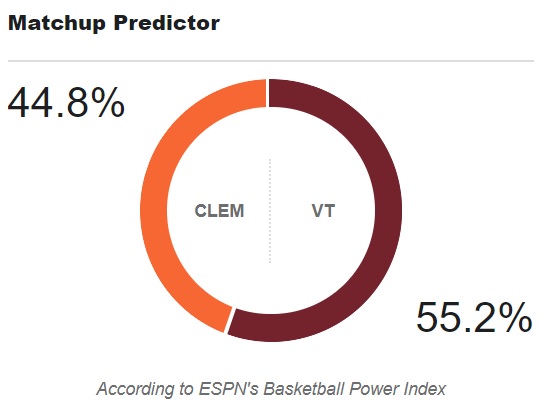 Clemson has taken more of a forward-facing step than Virginia Tech has. As the Tigers have (somehow) managed to progress.

Whereas our beloved Hokies peaked early on in A.c.c. play and have either regressed or hit the proverbial freshman wall ever since.

As these two seemingly lowercase Atlantic Coast teams have actually conspired for 4 huge wins vs. four different Top-6 nationally-ranked opponents when taken together.

It is just that Clemson has conspired for 75% of those lofty upsetting wins;
when you take things, apart.

Our handy-dandy friend the so-called Forum Guide of Graham Houston fame is calling for a… something new… this time and this late in the season? I only compared oranges to oranges instead of oranges to… tangerines. Only accepting like home and home common opponents or like away and away opponents. (i.e. Clemson and VeeTee both played whomever @home, or they both played whomever @away). Right? And the Forum Guide still came out in a whacko looking –111 point hole! When taken per capita it counts down to a less drastic looking –12.33 point Hokie-hole; though a hole is a hole is hole… and “a donut without a hole, is a Danish.”

The annualized year-to-date vitals say that… Clemson is up +2% in shooting percentage margin (evenly O & D split at 1% alike), with V.Tech up +4% in 3-point percentage margin (¾’ers from our superior O), and with Clemson up +3 boards in rebounding margin year to date, (although this was a |absolute value| deal as Clemson is just barely submerged on the glass and us/V.Tech are –4 rpg)

So, a.c.c.ording to what Eye can find?

The bubblelicious peeps seem to think that Clemson is indeed an NC2A so-called: “bubble-team” right about now. I’m not so sure I agree, although I would embrace and endorse that Clemson is indeed fighting for their post-season lives. Be that N.I.T., C.B.I./CIT, or -maybe with a stellar A.c.c. noise-making Tourney run- maybe they do have an outside shot at being seeded 64th to 68th here? Maybe… although I do wanna hear Clemson call: “GLASS” on this outside shot if they R.A.T.T. do.

There is no doubt that no matter how your rate 299-mile visiting Clemson’s theoretical bracketology for this one… the Tigers must claw their way to VicTory here if they wannabe sure to post-season bang-with anyone.

Considering that, our Hokies prolly need at least 3-wins in a row right now, and a second Atlantic Coast Championship Tourney dub-a-ewe to get to 19 wins would be most O&M welcome indeed.

Though there Eye go again… putting the Hokiebird’s cart before the, horse!

As it will take a near purfect performance on Wednesday night in the warming New River Valley to tame these puddy-cats here. It will take a 2nd-half of uva and a 1st-half @Lousiville complete 40-minute effort just to be sure.

Now, how Clemson is this much better I am honestly, unsure?

Although I am sure that we are gonna take their A-game post-season needy punch
and that we really do need to land the same.

As we have precisely 1 VicTory in the last 44-days.
Tho’ Clemson has 4-wins in the last 3 weeks.