Right now Duke slots at 24 up and 3 down overall, and 11-3 or third place in Atlantic Coast terms.

This -per always- is a very good and very well coached Duke basketball squad folks. And this just in … rain is rumored to be wet.

As this is a very efficacious Dukie hoops squad, at least on offense, although they do trend more in the direction of a centrist on defense. There is some electrifying star power; albeit it system obscured; with a very solid youthful nucleus of a Top-7 or eight ballers who know their rolls, accept the same and play at a unified very very high level.

Duke Backcourt: (returning starters=1 of 2)
Tyus Jones:  6-1 190 lb. t-freshman year One. Started off right enough at Duke, what with 11.6 ppg and 3.6 boards on 87% FT-shooting and 40% from downtown, which is none to shabby from a first year baller in Atlantic Coast terms. Listed as the 4th or 5th best recruit in the nation no matter where you looked. Played 5 seasons of high school ball he was so advanced at such an early age. Already known for his poise, ability to make others better around him, or be an outburst scorer if/when needed. Already leading Duke in steals at 1.4 swipes per game which does not suck. Neither did his senior state title, nor did having three maternal family members win 3 state championships, having a paternal Mr. Basketball Minnesota 1st-cousin and a Golden Gopher basketball team captain uncle (1960, Minnesota U). A concurrent blend of confidence and control, and yet another very interesting guy to check in on in 1-3 years, depending upon how long Tyus stays.

Quinn Cook: 6’2” 186 lb. District of Columbia baller by way of fabled Oak Hill Academy. Only Sr. year player on the roster for coach K. Which tells you something regarding this group’s future … if it stays together. Coming off what one publication called a very uneven junior year, did work on his strength and conditioning in the off-season. Good rebounding One (3.3 rpg) with a downright reliable 2.62:1 career assist-to-turnover ratio. Old-school pass first Point that leads coach K in assists with 5.6 dimes dropped per contest. Second best 15.9 ppg scoring is a pretty nice rallying cry from a yo-yo’ing third campaign. Plays the game the right way with energy and emotion, can ignite team and spark the game when Duke needs it. 41% from distance must be honored and helps create spacing to run coach K’s pet system. 2-time honor roll student who was a mid-30’s consensus recruit outta high school. Quality, reliable, solid elder-statesmen who has added a nifty looking 4-5 points to his final year of eligibility.

Duke Frontcourt: (starters back=1 of 3)
#15 Jahlil Okafor: (QUESTIONABLE, sprained left-ankle/foot) Center, 6’10” 277 lbs., t-freshman. MVP at the 2014 McDonald’s All-American Game and senior season Quad-A titlist up in Illinois. 1st team USAToday member. And the ONLY baller I’ve ever seen in 12 years of doing this, to merit … unanimous ranked # 1 overall prospect status in his class by ESPN, Rivals, Scout and 247Sports … rated No. 1 overall by the Recruiting Services Consensus Index. Never ever have I seen a quadratic #1 clean sweep. 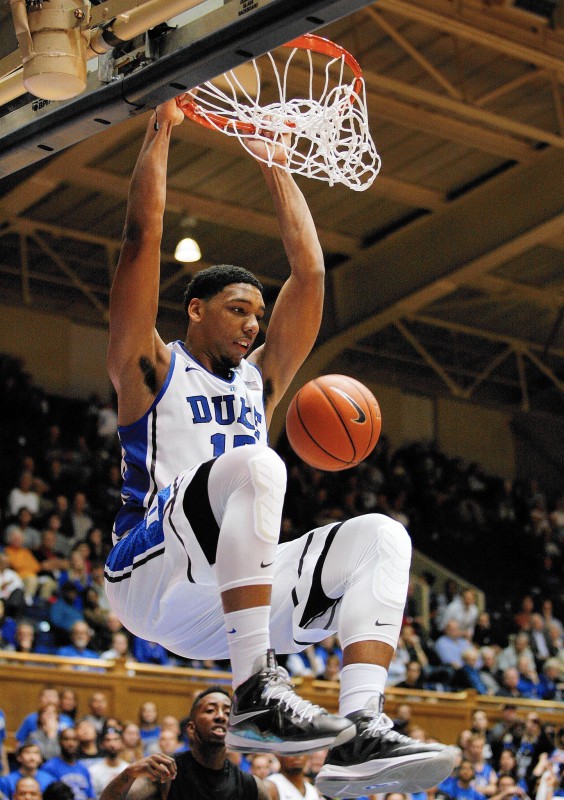 Such would lead, well, …one, to conclude that Mr. Okafor might just be for real. His numbers his rookie season are real enough: 18 ppg, 9.4 boards, 1.5 blocks on 67% shooting overall says so. 54% however from the charity-stripe says his 15′ un-guarded set-shot needs some efforting at a team leading 154 FTA’s. However, this kid is already a surefire 1st-round N.b.a. draft pick. Prolly a surefire Lottery pick as well.  Has already hung 4, that’s four gold-medals around his amateur internationally decorated neck –never read that one before, either. The book says this is a polished footwork and finesse oriented Five. A Center with more parts technique, poise and craft and less parts pure high voltage dominating power. That said, this is about as bad a match-up as coach Buzz has to go up against all year. As this kid is the truth; if this kid laces them up on Wednesday night.

Amile Jefferson: 6/9 215 lb. junior year Power-Forward Philly baller. Wingspan funded defender who plays bigger than his listing (weight in particular) suggests. Coming off a summer-time 1.5 month hip-injury, known for quicks, offensive rebounding and great hands. Rare ambidextrous scorer for a front-courter and an all-A.c.c. Academic Team member to boot. Right now A.Jefferson nets you 7.7 ppg on a second-best 6.4 rpg with precocious 63% shooting from the field.  21st ranked recruit overall and 3rd ranked power-forward in his class according to ESPN.com. Was awarded the Gatorade boys Basketball Player of the Year for Pennsylvania as a junior and again as a senior. 4-time Keystone state champion! Smiles at you, while he plays with a bit of an edge | also needs FT reps at a mere 56%.

Justise Winslow: 6.6 225 lb. well muscled Three in his debut season outta Houston, Tx. 11.9 ppg scorer with 5.9 rebounds and 38% 3-point range with 45% from the floor. Said to be a multi position utility defender with a very focused or even mature business-like approach to his game. Physically advanced player with a senior year body at age 18. A top-10 ranked recruit by everyone not named ESPN.com –who only had him labeled as 14th. Twice named the Gatorade Texas high school player of the year; did not win a championship in scholastic competition however. Father (Rickie) was a member of the famous Phi Slama Jama Drexler and Olajuwon run at Houston. 7 year N.b.a. pro’ (Milwaukee Bucks) in his own right. So the Human hooping Genome Project is willing indeed. Says that his favorite athletes are: “Jackie Robinson and Cassius Clay.” 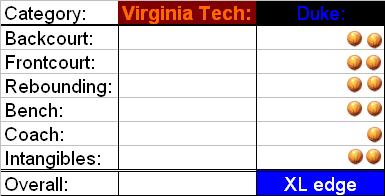 Illation, conclusion (s) and OPT digits:
Well, this is gonna be an easy closer to write, because not often do I get to say this in here … because if anything? This Duke club is actually, un-der-ra-ted. (clap, clap, clap-clap-clap)!

If Jahlil Okafor can not hobble along and give this one a go, it might be enough to cut this one down by ~5 to 10 points or so. Unless Duke is simply viewing this as an empty the bench glorified Atlantic Coast scrimmage of sorts … which it well could be, if Duke opened up 5×5 and went 1,000% all-in and all-out from the tip-off.

Coach Buzz and his road weary crew finally return home, after our beloved Hokies were beaten like a cellar dwelling drum out on the A.c.c. road by 20.3 ppg on average. 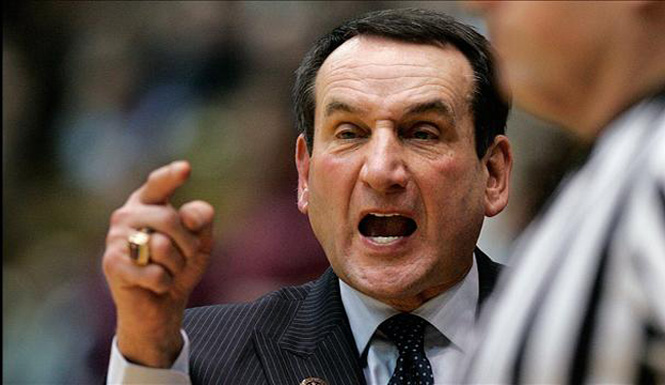 Or in other words, we are not playing very well, not at all, and you’d have to even wonder if our A+++ game home cooked punch could stagger even a D+ looking-ahead to the rematch @U.n.c. version of Duke, even sans the nearly epic Okafor kid; should he be sat and rested based upon the probability of calculated risk. i.e. how much R.A.T.T. risk is there in an upset victory vs. heavily sagging Virginia Tech?

Well, quantify it this way, it has not taken more than 54 points to lace Virginia Tech since the first week in February. That and Duke has an aggregate 15% edge from the floor, a 12% advantage from the arc and enjoys +17 rpg in rebounding margin surplus in these two schools most recent five games.