Virginia Tech men’s basketball is on something of at least a visiting schneid of late. Having dropped two straights in the always treacherous waters of All Coaching Conference road games.

The Hokies now, however, return home to the hopefully more placid Duck Pond waters when they host #5 nationally-ranked Florida State on Saturday. This is, however, no small ask vs. the typically skyscraping visitor. As F.s.u. checks in at a shiny looking 17 up and merely 3 down for the season. Or in a tie for second-place in-conference terms; (.778 in A.c.c. play). As the Seminoles have only been beaten once since the very initial days of December of last year. (i.e. their last time out vs. defending National Champion hooVa 56-61 the ‘rong way). Nonetheless, what you wanna know is who is gonna win and by how much; right? So, read on; to find… out!

As to me… this is an underrated all-’round roundball coach here, men.

Daddy Leo’ is married to Claudette Hamilton. Claudette is a volunteer tutor, and they have two children: Lenny, 25, a musician; and daughter Allison, 10.

7′1″, 26o lb. t-Fresh., Balsa Koprivica is a Belgrade, Serbia imported true-C and yet another lengthy post-player for coach Leo down in Tally. 5.8 ppg, 2.7 rpg and a stellar 72% from the floor tells you pretty much where Balsa shoots from and good on him. As same as putting in Golf, and unlike sex… longer≠better, here. The rags say that Balsa is a back-to-the-basket Five with some midrange game to boot. Koprivica was the 56th player overall in last year’s recruiting class according to 247Sports and he was a member of the Serbian Under-18 team that won the gold medal at the 2017 FIBA Europe Under-18 Championships. He is also said to have good-hands and be fairly athletic/mobile for a legit-C. And with a wingspan of better than 7-3 and a standing reach of better than 9-1 I am curious to 2023 check back on this 2012 rookie and see what’s what? (as he was actually #1 overall in the Nation for his Sophomore scholastic season recruiting class!) p.s. his old-man ran Serbian ball as a P/F vs. Magic’s 1992 so-called: Dream Team. And this hommie has a bit of a temper ejection or D.Q. vibe to him as well. Great luck on dat.

Dominik Olejniczak is only a 7′, 26o lb. grad-Transfer (Mississippi by way of Drake formerly) and by way of Torun, Poland. Dom’ nets you 3.1 ppg with 2.1 rpg on a reasonable 57.4% while being the seemingly stronger/less mobile of the two F.s.u. twin-towers. Olejniczak is technically a r-Sr.-grad.-transfer baller. This means it is very tough to top his experience-curve at this stage of his decent tho’ not quite epic college hardwood career. Dom’ did score a bit more and shoot a bit better prior to this season (right at: 6.5 ppg on almost 60% coming into this one). As he was pretty highly rated by most of my preseason magazines; so, you’d have to think F.s.u. thought they would be getting mo’, here. (and yet a closer examination of his Polish H.S. digits would not concur, what you see is what you get and you got a guy much closer to a careerist D-1 back-up C (albeit one who is about to get his second, degree)).

Three different One through Three or One through Wing back-ups also check-in netting a nifty 39% of their 3’s or better in relief. As the F.s.u. bench does not want for specialization or customization as specific player-personnel roles go for L.Ham’. 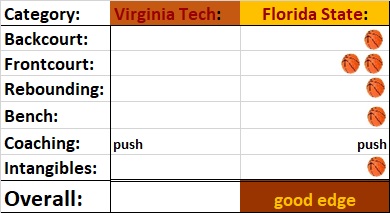 the takeaway:
The takeaway here is… so, first-half @Miami while we were getting Lake Okeechobee swamped? 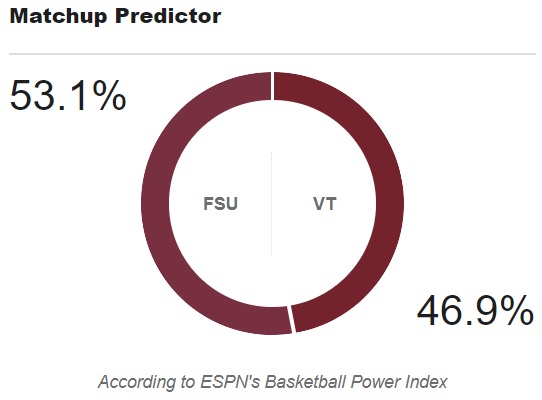 I had thought this to be a hardwood squad suffering from so-called: ‘tired legs’.

However, we went in at intermission, shook ourselves, came correct, and played and shot better in the second half.

So that would appear to rule the proverbial hitting of the rookie year wall or any ‘tired-legs’ out.

Because if anything, you would expect to see a leg-drain (not a leg-gain) as any given 900-mile roadie of a shooting night plays out.

The true(r) litmus-test of any linger focus/intensity concerns will come this Saturday afternoon over in the New River Valley on Super Bowl eve.

Because you’d have to think we’d have longer-(shooting)-legs at home what with 619-mile road-trip out in front of the Seminoles and our Hokiebird’s nesting in their very own, beds.

(unless of course, this is something else, entirely?)

Our handy-dandy friend the so-called Forum Guide of Graham Houston fame is calling for …and this was with a surprisingly limited round-robin head-to-head Coastal vis-à-vis Atlantic scheduling data points quirk… the Forum-Guide is calling for a whopping 50-point Seminole raiding-party beatdown! Even on a pro-rata basis it is still calling for right at a 13-point VomiT. (recall: …we have seen this trend in the last few A.c.c. runs; n’est-ce pas?)

The annualized year-to-date vitals say that… F.s.u. is up +2% in shooting percentage margin (all on O); in 3-point percentage margin these two are only tenths of a point removed from a sister-kissing dead-heat (with F.s.u. up +2% on D and VT up +2% from 3-point range on O); and yet F.s.u. is up a decent looking +4 boards in rebounding margin (most of which is from F.s.u. +3 to -1 from VT as seasonal margins go).

The Seminoles are up ~+8% at the charity stripe for the year.
Although traveling F.s.u. attends up a useful +3 in R&R in the last couple of weeks.
Virginia Tech is a solid .833 as your host; whereas Florida State is only .571 as your guest.

So, one of the things that per se got me in writing this preview… was that methinks that this years’ (seemingly better) Florida State hoops team matches up poorly with last years; and the year before.

Point being… not since Solomon and Robinson have V.Tech departed much of anything in back-to-back classes upfront. (with a possible tip of the cyber-cap to: Ace and Smitty as well).

The caveat being… although F.s.u. has seemingly been dealt at least a modest vertical blow… they have really enlarged their backcourt prowess Pt.Guard through Wing or S/F talent pool. Which is very deep on offensive tradecraft and even more talented over on D.

That’s a pretty dang hard out in my book folks.

So, when I saw the ESPN odds up above -and Eye did check them thrice- as ESPN will adjust them as new data points become available; and the current odds actually narrowed in our upsetting favor to (47.3% chance we get a VicTory) … and honestly, I was given… pause.

A pregnant pause that was in its fourth trimester worth of pause I mean.

As these Bristol digits sure do look off —at least to me.
(and possibly way off at that…)

As in… we/VeeTee are slumping or tiring or just plum down on our defensive intensity and ball-movement on O of late.

Eye say this because we have started three different starting line-ups in the last two weeks. So, we are at most in flux or at worst something is fluxed-up in 24060 terms or so it would seem.

Or to put it another way…

…the best Super Bowl bet on what amounts to a 3-ring-circus of a gambling day?

Because all the Super Bowl exotics and whacko looking props are all about reshaping squares.

So here we “a sucker born ever Cirque du Soleil” come!