Virginia Tech men’s basketball returns home after taking an F.s.u. scalp in a game they needed to win just like a dead-man needs a… coffin!

The Hokies went blistering hawt like some kinda crash course solar-probe in the 2nd-half from downtown… and yes… it is true… “shooters, shoot.” How that newfound Ton-80 Club bull’s-eye marksmanship does traveling back to Blacksburg remains to be seen. As coming up 410-miles Nor-by-Nor-East would be seemingly beatable 9 up against 11 down Georgia Tech. As the Jackets are a pretty porous looking 2-7 in Atlantic Coast play. Nonetheless, what you wanna know is… who is gonna win and by how much, rights? So, read on… to finds, out!

Kid, Josh Pastner, is a Glen Dale, Wva., native and the son of Marla and Hal Pastner. Hal is a high school/A.A.U. coach and basketball promoter in the Houston (Tx.) area. Josh Pastner knew he wanted to be a coach since he was in the 5th grade. By the age of 13, he was publishing the Josh Pastner Scouting Report of local high school talent in the Houston metro’ area | at the age of 16, the Houston Hoops A.A.U. squad was turned over to Josh Pastner by his father/coach Hal; as this was Josh’s first job as a head coach! While a teenage A.A.U. coach, Josh Pastner coached future NBA players such as Emeka Okafor, T. J. Ford, and Daniel Gibson. WOW!

On April 6, 2009, Josh Pastner was selected to replace John Calipari as head coach at the University of Memphis. At Memphis Coach Josh Pastner only won five conference titles in his seven years as the big whistle; including one C-U.S.A. Coach of the Year award in 2o13. Josh made the March Madness big dance at Memphis his first five seasons; then declined lesser post-season invites in his final two shotgun to Coach-Fu tenured years. Josh is known to be one of the best young hotshot recruiters in the land, including inking the #1 recruiting class nationally for Memphis in 2010. To put it mildly, Josh Pastner is a basketball coach and nothing other than a basketball coach. Coach Josh Pastner also courts a rep’ for lack of post-season success with a lot of one-n-done high roster turnover early entry type talents. Baller Josh Pastner was a walk-on freshman on the 1997 N.C.A.A. Championship University of Arizona basketball team. After winning the NC2A title, Pastner was able to finish his degree in only two and a half years, taking as many as 33 credit hours per semester. He earned his bachelor’s degree in Family Studies from Arizona in December 1998. He finished his master’s in Teaching and Teacher Education in December 1999 before beginning work on his doctorate and starting his coaching career in 2000 as a graduate assistant under Lute Olson at Arizona and later at the University of Memphis under John Calipari.

Though Eye do know that Joshies overall numbers and his digits in the ATL are slightly trending upwards; so, there are a couple of encouraging signs, here.

Seven of Pastner’s former assistant coaches have (already) gone on to their own careers as head coaches. Pruning a broad branching coaching tree, already!

Georgia Tech at a glance:

Tristian Maxwell was sidelined with a foot injury (whispers say: “right-foot snapped”, St.Servatius bless), and there was no timetable for return. Well, until he… returned; that is. Sidelined tho’ now back were his 6′2″, 2o9 lbs. As this sophomoric lead-G and his nearly doubled 7.4 ppg and his nugget or rookie year legacy baller swagg are noticeably improved this campaign. As ‘yes’, he is the son of Vernon Maxwell, a former the University of Florida All-American and longtime N.b.a. veteran and champion with the H’town Rockets way way back when. 40% when dial-long-distance roams well enough. The 50% on 15′, unguarded set-shots with 10 seconds to shoot however is not commiserating with all of that. As this hommie be keeping near earlobe sized earrings and you need to have it together to ear-farm that many carrots just like dat. Former North Carolina State Player of the Year one season in H.S.; and then Nc’s Mister Basketball scholastically the next. This was where young mad-Max’ had a pure blow-torch scoring rep’ which tagged him 198th in America from 247Sports. Does not seem to want for confidence on tape; prolly has some trysting lady-swagg fo’ it to boot. Has all kinda stars (*’s) inked on his off-forearm, so he’d best be shooting lights-out to extended the metaphor here. (UPDATE: Missed his last two contests, listed as: QUESTIONABLE with a bum-thumb, St.Julia bless!) Prolly is a good scorer, and this Trist’ too is prolly a 2o24 or so ask back…

6′7″, 2o9 lb., final-year, Khalid Moore is a Three or S/F who handles and moves a bit more like a lead-G or a Two. Khalid is a lengthy, athletic (7-foot, 0.5-inch wingspan) Forward with good scoring ability and a top-shelf basketball I.Q. As you can literally see this Pterodactyl-looking coverage on film when he is on D. This is a Rodin or thinking man’s baller. Although this year he is only thinking of: 4.o ppg and 2.4 rpg on a less than Summa Cum Laude 26.3% long-distance and partly 35% career all. As ‘more’ was expected from this part-time starting combo-F, here. That squarely struck… warming, on-trend baller here too gents… maybe it is all coming together for him after a series of career-highs?

Third-year with three years remaining Rodney Howard is a kinda strapping looking: 6′1o″, 246 lb., BIG upfront down-low for Gah.Tech. Who frankly does not explode or ball as physical as he looks in the film-room. U.G.A. or national champion in football transfer Bulldog baller. (Wonder how that collar wears on rivalry court?) This after he renaged on his Olè Miss. signing thus making the Jackets his third school technically speaking in less than 2-full-years. (And we know how Eye tends to feel about that). Anywho… No. 1o6 in the 247Sports rankings. Did pocket a USA National Prep School National Championship bling. So that only forever counts. Only had so-so scoring and rebounding digits in preparation for his 3-colleges in ≅1.5 years. Did I mention the change of addy labels, yet? Mmmmm-K, tho’ 5.1 ppg with 4.9 rpg and 1.1 bpg with 50% from the floor is not the worst triune collegiate start.  As this is a legit Five or true-C who is only in his 5th year of organized ball. So, who knows where Mister Rod.Mo’ R.A.T.T. 2o25… projects? (As there are just a few flashes/whiffs of ‘zo.Mourning to the way he goes at the rack on tape here). 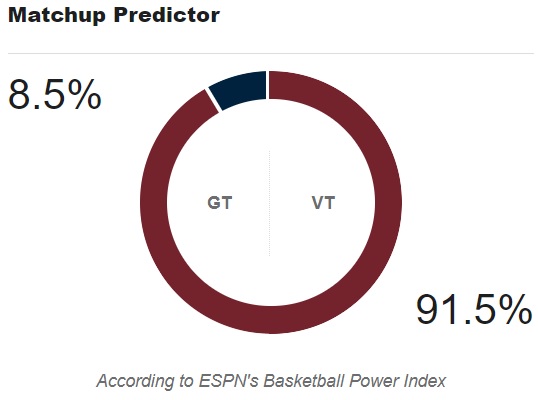 As it only took blackjack or twenty-one Ace-10 games for our shooters to actually… well, shoot!

Still yet, that was a helluva a Hokie win and we surely needed it like a dead-man needs a coffin.

Now we get to see if our suddenly hot hot hot Buster Poindexter shooters can consist or at least remain ambient or warm-enuff on distancing itself.

As this is the first of two teams in three (rescheduling) dates that we/VeeTee
really should have at least a fair-to-middling looksee at.

Our handy-dandy friend the so-called Forum Guide of Graham Houston fame is calling for a 21-point VicTory Dance when taken common-opponent round-robin roundball head-to-head. Pro-rata and this works out to forecasting a more settled-down looking 5.25-point Tech Triumph. The *really* curious thingy is… the Forum Guide (less one outing game) nearly achieved a perfected 1:1 total congruence of machine-shop ‘tolerance’ or fit. As our schedules were nearly precisely the same venue (H or A) and the results were highly correlative or resultant indeed in 4-squares, line-of-best-fit or regression terms. You never ever see it this narrow in terms of calendar fit either. Most curious to see how this one… equates for it too! (Or… nots???) 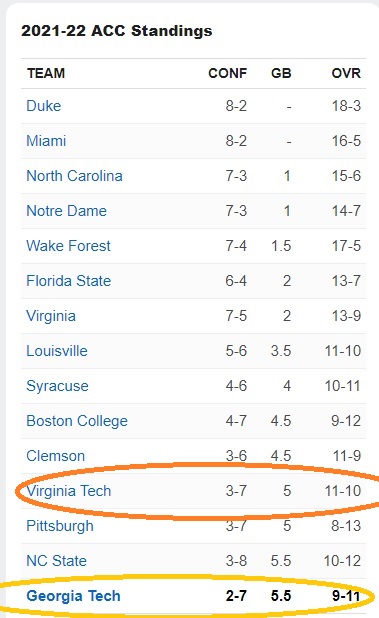 The annualized year-to-date vitals say that… VeeTee is up a decent +4% in shooting percentage margin (3 in 4 ‘thx’ @better O); with V.P.I. up nearly +5% in 3-point percentage margin (all on O with D nearly a draw), and then with GeeTee up right at +1 in rebounding margin in Windex Wipes (tho’ both clubs are near caroming equilibrium for the duration year-to-date).

The most recent 5-game metrics say that… the Hokies are now up +3% in shooting percentage margin (all on O, with a mild deficit on D); with the Jackets now up +1% in 3-point percentage margin (O&M was +10% as a hot-handed O-faced-team, however, GeeTee has really handcuffed peeps on 3-point D of late— i.e., something gotta give here), and nobody was really up much of anything in rebounding margin in backboarding terms (per: both teams hovering right at –2 rpg on the glass of late).

QUAD-CLOVERS GONE STUBBED RABBIT’s FEETS?!?
According to Kenpom.com, the Hokies are one of the unluckiest teams in the nation, ranking No. 352 in their luck metric. This is the stamdard-deviation between actual and expected winning percentages.

Well, we/VeeTee have gotta be the rightful betting favorite after what just happened, Hump Day nite @home in there one, here?

And this just in… my sourcing still insists that rain is rumored to be… wet?

Or rather if my Aunt Kim had nutz-n-a-bolt she’d be my Uncle… Tim?

Wait a minute… not sure if that was germane or not? 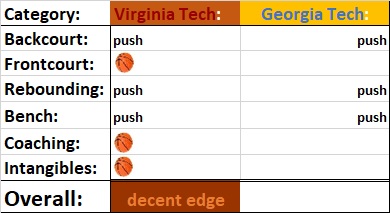 What Eye am sure of is that we needs to fight big here… typed that once before this year @Navy. Do not fight down to Georgia Tech’s (admittedly) pretty spry and pretty quick lowercase backcourt size. Alum and Mutts needs to go on and be big, here. 15.2 ppg and 6.3 rpg from Keve and 10.4 ppg and 7.3 rpg from Justyn are the minimums here. Ditto a FREE Ojiako and N’Guessan or a sighting of the same.

Eye say this as Coach Ripley would agry… (Believe it or Not)… we/VeeTee are nearly 100 spots better in bpg. And yet a mere 316th on the D-glass and a nearly as suspect 294th on the O-glass. Do you see what I means?

Don’t fight G.Tech’s backcourt needy shorty fight— and then end up wondering late how this needy/clingy stage V hugger of a team hung in and then hung around, late.

As some inside-out game should only free up our mad-bombers from sharpshooting range all the mo’. Or did that just make too much inner Pt.G. in me, sense?

’cause we do not need to fight down to Georgia Tech’s flyweight size here.
Punch downhill… push/shove, lean on them like Fury did Wilder, and make G.Tech wear our heavier-weight(s).

A.c.c.ordingly… start=finish here.
And we needs to finish an available G.Tech off from the start.

We let them hang around and then muck around and get all kinda
unGuarded or backcourt-centric and all bets are, off!