Virginia Tech men’s basketball returns to close out their very final regular-season date to the 2019-2020 docket over in South Bend, Indiana.

The Hokiebird just went Phoenix and rose right on up in a downright sharp-looking Senior Night effort vs. streaking Clemson to keep seemingly sagging O&M post-season hopes alive another day. Now they must sojourn precisely 550-miles Nor-by-Nor-West to face a smart Fighting Irish hoops squad in a Saturday matinee. As Notre Dame checks in at a very respectable 19 up and 12 down overall. Although a very middleocore .474 or 9-10 inside of All Coaching Conference play. Nonetheless, you wanna know who is gonna win and by how much, right? So, read on… to find, out!

Brey led the Irish to the NCAA tournament in his first three years as head coach (2001–2003), notching a Sweet-16 appearance in 2003. He has led his team’s to tournament appearances in 13 different seasons at two different schools. He has won six conference championships, four Conference Coach of the Year awards and five National Coach of the year awards (all for the same season: 2o11). Good for two Elite-8’s and three Sweet-16’s overall. Coach Brey has only suffered one negative (<.5oo) L’ing season in 21 years. And his teams have enjoyed a post-season in all less three months of March. Coach Brey teams attend with an overall skillful, offensive and a shooters marksmanship rep’.

Peep Brey was born March 22, 1959, Brey is a 1982 graduate of George Washington with a degree in physical education.

Robby Carmody is/was a now thinner looking 6′4″, 2o1 lb. back-up off-G as a second-year baller who was netting you 5.4 in relief along with 1.6 caroms even if his shooting (9% deep last year | 0% in seven games this year) was still Sr.Prom home alone busy. Robby, however, nuked his shoulder last year (may St.Christopher bless); and this from an interesting Levi Strauss & Co. poster boy looking kid who was actually known for his transition game and for scoring from all three levels. Daddy Carmody is really coach Carmody who has only been the head coach at Mars Area for 20 years and was the Pennsylvania AAA Coach of the Year in 2016. So, hoops are in Robby’s blood and he knew the 1 through 5 whiteboard game well enough. As Rob’ was merely the 2018 Gatorade Pennsylvania Player of the Year and the no.81 national recruit per ESPN.com. Therefore, this is a major backcourt injury for Notre Dame.
(UPDATE: done for the duration, left-knee (A.c.l.), maybe St.Nikhon bless!)

6′6″, 218 lb. Rex Pflueger is, well, was; he was the N.Dame starting One last year and then he and his blown knee (may St.Nikhon bless again) were both done. However, he and his graduated knee and a surprising +17 lbs. are back and are now second in dimes dropped per contest (3.5 apg). Also back is his 5.1 ppg, his impressive 3.4 rpg, and 33% long. Additionally back is the Irish Team Captain for this campaign and his final year leadership plus a ton of backcourt experience that Rex brings with him as well. Rex was the Irish defensive player of the year on-team for two seasons running, and he too was all-A.c.c.edu. Now mix in two full tournament clutch-ass game-winning shots and a lotta late-game trust that now subs in off the pine. As Pflueger is a Gestalt baller or a super-glue guy who you hope does even better in the game of… life. (although Rex’s numbers are a bit truncated this year… poor kid… as you have to wonder what he’d be on two good-sticks as well?) As he already leads N.Dame in swipes (1.5 spg) as rickety is.

Soph. year Nate Laszewski is a 6′10″, 225 lb. somewhat string-bean looking though springy P/F frontcourt baller from Jupiter, Fla. Nate nets you a useful pine-squad 7.4 points with nearly 5 rebounds and a swat in relief and you have to be intrigued by what this thin big man can be if his body every big-baller fills out? As Nate added a 25-lb. ferrous plate this off-season and he prolly could add close to one more. As last year Nate lead N.Dame in FT-shooting and his 31% from deep as a frontcourt big is never a bad thing. Lasze’ was ESPN’s no.51 baller nationally and he sure set a buncha New Hampshire scholastic 3-point shooting marks as a Euro-type Four.

6′7″, 220 lb. final season Nikola -grate name- Djogo got included here just for his grate name and ’cause I wanted to climb his family tree. As you do not see these two Ethnicities paired together too often. Much less when you see them migrating southward to run ball from the Great White North, “eh“. As Nik’ is a Hamilton, Ontario native and this is precisely why assuming make an ass outta me. Nik’ gets you a point and a board in spot-minutes relief and he’s not much of a shooter JIC we senior day see him here. (and may St.Christopher bless some more and Nik’ has a history of shooting-shoulder surgeries to boot). That said, Mister Djogo does field a Triple-A OFSAA Championship ring (from H.S. Canadian ball) that I’d bet nobody else who ever meets Nik’ in the lower-48 does. 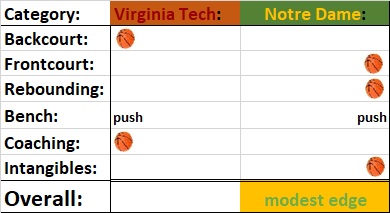 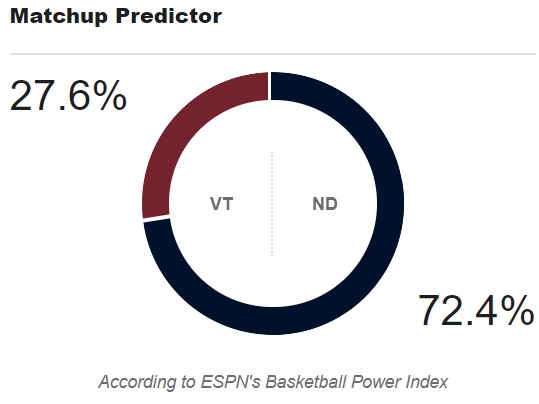 As we/VeeTee inched another centimeter towards (possibly) qualifying for some level or some variety of post-season Tournament… as opposed to being disqualified and going: 2020 Spring, Broke.

And I likewise gotta wonder out-loud… what would getting a VT-11.5 number right at 6:59 PM would have paid at the Vegas big window come any time after 10 o’clock???

Our handy-dandy friend the so-called Forum Guide of Graham Houston fame is -for a change- only calling for a –35 VomiTorium of an outcome here for the regular season (virtually) now taken on the whole. On a populous basis, this amounts to a vastly more manageable looking mere single-shot N.Dame forecast advantage of 2.69 points or about one trifecta more/less. The intrigue is found in the fact that the Fighting Gobblers bested the Fighting Irish in not less than a handful of round-robin common-opponent comparisons. The caveat is that VeeTee did not best them by much at all as the comparative final-margin went. Still yet, we’ve not enjoyed anything close to this in nearly two Forum Guide months running. “And that is an encouraging thought.” —Coach Gandalf the Grey

(mid–script: the recent Forum Guide did not yield much of anything… as N.Dame and Vah.Tech only played one team in common (Miami) in each squads’ last 5-most recent contests)

The annualized year-to-date vitals say that… totally insanely enuff, this game is a TIE in shooting percentage margin (both teams are 42.6% on O and N.Dame is only a nominal 3/10ths softer on D); in 3-point percentage margin V.Tech is up a detectable +3% (a little mo’ on O), and N.Dame is up +2 in |absolute value| rebounding margin for the duration as caroming goes (with both teams negative or in the rebounding hole, albeit with N.Dame only about ¼ as bad off the backboard for the duration).

The most recent 5-game metrics say that… the Irish are up +3% in shooting percentage margin (decently better on O with VT a smidgeon better on D); with the Hokies, up +4% in 3-point percentage margin (equally O & D split), and then with the Irish up +5 misses in |absolute value| rebounding margin for the most recent fortnight of Windex work (with both teams negative or in the rebounding hole, albeit with the Irish only about ½ as bad off the fiberglass of late).

So, a lotta things seem to point to picking Notre Dame @home here in this early Saturday afternoon inter-league tilt.

I’m not really desperately inclined to forcefully disagree. The Irish are running on their very own So.Bend hardwood and A.c.c. teams only travel successfully right at 3 in 10 odds historically.

The thingy is… N.Dame has dropped off a bit of late… or at least since their bench shortened no thanks to the aforementioned substitute injury (i.e. Carmody). This has effectively disrupted the Irish rotation overall and wore down their primetime performers due to a necessarily increased workload sans Carmody.

The hurrying Hokies finally snapped outta a general overall roundball funk or shooting ‘malaise‘ to mix Will Stewarts’ sporting metaphor all the more.

What you must ask yourself is… which streak is more pertinent and therefore more likely to self-sustain? The Modest Irish dip of late or the immediately recent Hokie uptick?

house.” Whereby I might just stake a marginal sense of O&M outcome ownership come ~5 PM over in a snowy New River Valley.

As the best I can do is give you a rental agreement on leasing a Tech Triumph as the VisiTor here.

Notre Dame is not beyond our reach; are they however within our grasp?