Virginia Tech men’s basketball returns to work after -we all hope- a restive and recuperating near full week of O&M R&R worth of downtime or being just plum hardwood off. This recreating respite occurred after being more than a little off during a pretty well now fugly looking 1 single solitary VicTory jaunt since the middle of January vs. a spiraling 6 L’s in our last seven. i.e. this former post-season nearly assured men’s hoops club is now an iffy looking or a possible spring broke 14-10 overall (and 5-8 in the A.c.c.) club.

The Hokies now host my hometown Pittsburgh Panthers who check-in at a likewise win needy 15 up vs. 10 down for the regular season (and 6-8 in the A.c.c.). As both teams really do need this win like a dead-man needs a coffin. As an L here -either way- could prove rather undertaking come Much Madness on spring break 2020. What with not less than eight (that’s 8) All Coaching Conference teams all mid-range jumbled up standings wise at the moment. Nevertheless, what you wanna know is… who is gonna win and by how much; right? So read on, to find… out!

Baller Capel ran hoops at Duke University (1993–1997), where he earned a starting position as a freshman and was a starting guard on the basketball team for four years. On February 2, 1995, in the regular-season game played at home against UNC, with Duke trailing 95–92 at the end of the first overtime, Capel hit a running 40-foot shot at the buzzer which sent the game into double overtime. Although Duke lost the game 102–100, Capel’s shot was hailed as one of the most memorable plays in Duke basketball history, and it was nominated for an ESPY Award for College Basketball Play of the Year. Capel’s college career was marked with success. During his years as a Blue Devil, he racked up 1,601 points, 433 assists, and 220 three-point field goals. He finished his career among Duke’s all-time Top 10 in minutes played, three-point field goal percentages, three-point field goals, and assists. Also earning his Duke.edu degree.

(nepotistic) Coach Capel began his coaching career serving as an assistant coach under his father, Jeff Capel II, at Old Dominion University for the 2000–2001 season. In 2001, he joined the coaching staff of Virginia Commonwealth University as an assistant. He was promoted to head coach of the Rams for the 2002–2003 season—making him, at the time, the youngest head coach in Division I men’s college basketball (27 years old). In his four years as head coach at VCU, Capel guided the Rams to a record number of wins (79) and the highest winning percentage (.658) of any Division I program in the Commonwealth of Virginia. Following the 2003–04 season, Capel was named both the Richmond Times-Dispatch and VaSID State Coach of the Year after leading the Rams to their first NCAA Tournament appearance since 1996.

On April 11, 2006, Capel was named the head coach of the Oklahoma men’s basketball team, succeeding Kelvin Sampson. As the big whistle for the Boomer Sooners, Coach Capel had one really sharp Blake Griffin fueled season (Elite-8), made the round of-32 one other time and was spring broke and Merrill Lynch (see: below) scandalized in the meantime. As Coach Capel teams seem to be either: very very good, C+ good or not good at all. (i.e. not a middle ground or WWI type of coach).

Daddy Capel is married to Duke alumna Kanika Réale Blue. They were married in 2003. The two had their first child on April 26, 2007, Cameron Isabella Capel. Two years later, the two had a daughter, Sydney Gabrielle Capel, and three years after that,
they had a son, Elijah Blue Capel.

*  At Oklahoma, two seasons ago… all wins were subsequently vacated due to using of an ineligible player, Keith “Tiny” Gallon, who had received impermissible M.Lynch benefits

Pittsburgh at a glance:

6′8″, 216 lb., Fr., Abdoul Karim Coulibaly, by way of far far away Bamako, Mali, is a P/F who looks more parts glider or maybe a stretch S/F to me. A.K.C. is a cunning looking Koufax or lefthander who can score on the block and step out to the perimeter. With solid passing ability from the high-post from a kid who balls with great energy and enthusiasm and is pretty dang active on both ends of the floor. Or a still developing energizer bunny off the Pitt pine-squad as every bench needs a Mr. Energy just add P.T. kid— as Coulibaly’s 1.7 ppg and 1.2 rpg on 35.1% shooting will have to 2023 wait.

Wichita State by way of UNC Greensboro and now Pitt Panther Eric Hamilton is a 6′9″, 230 lb., well-hewn looking g-Transfer Four or P/F banger. Eric is a just downright strong-looking kid who inflicts his way to a useful looking 5.4 ppg and 4.2 rpg as a frontcourt sub’. As this is a sweaty, heavy-industry Baltic Avenue man’s Wes Unseld with no houses and not even any trailers in situ. Tho’ e.Ham’ comes to work and he does work hard on tape and there are worse things anyone could say about any of us than that.

6′10″, 238 lb., third-year, P/F-C combo’ frontcourter Terrell Brown is 5.2 ppg and 3.6 rpg post who leads Pitt in swat-team work with 1.3 bpg off the pine. 52% shooting is not bad although this is a rim-protector and match-up big not a true box score stuffer. That said, t.Brown and his towering 7-3 wingspan and 9-1 standing reach can still do a lot for you as a defensive rebounder off the bench. (even if Brown’s pretty decent H.S. numbers (including 39% from 3-point-land) make you wonder if more was (eventually) more to be expected here— as he seems to have peaked a few years ago). 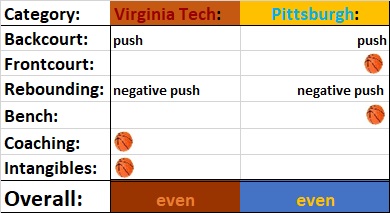 the takeaway:
The takeaway here is… well, I sure hope we took away some vastly needed so-called: “fresh legs” from our recent downtime or hardwood time-off. 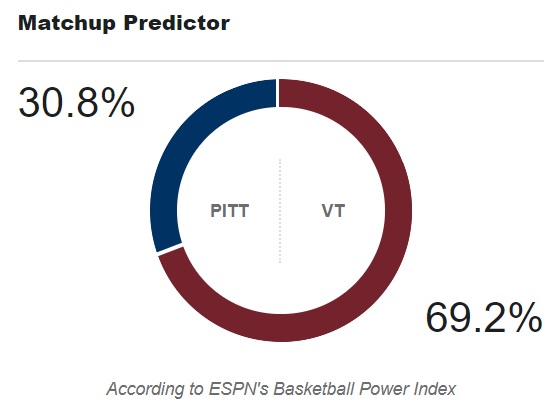 Because beyond hitting a hot-shooting night from range? We are who we are; and recently we have been a 3-point team that has died by the 3-point sword that is currently in quest of new 22 feet, 1¾ inches worth of life.

Pitt, however, is not beyond our depth.

Eye scouted them vs. Clemson and frankly -unless I saw their 2020 nadir game- frankly I was nowhere near as impressed as I expected to be.

As Pitt may enjoy a few more pieces overall than we do, although V.Tech has the best player on the floor (Nolley) and he seemed to be showing some signs last time out vs. BeeCee.

Or in other words… I’m pretty dang happy this one is @home.

As this lends us a fair to middling shot in this one here.

Even so, here is the caveat… the Forum Guide —even as imbalanced as it can indeed sometimes be? It is the ONLY thing that has correctly called for this recent Youngling schneid. And even on a per capita basis, it is still calling for a 7-point Pitt VomiT. The thing, however, that jumped up on me when constructing the Forum Guide was… Pittsburgh hass -other than Clemson- Pitt has swept or at least split with every A.c.c. team that has tamed us.

Additionally, Miami and Gah.Tech were both played by V.Tech and by Pitt within the realm of each team’s most recent 5-game statistical matrix presented below. When taken as a textbook Recency Effect or as a 2-team Forum Guide alone… they are calling for Pitt by 17 or at least by ~8 on a pro-rata basis. Do you see what I mean? (this is a bad look overall and near-term alike; i.e. there is no textbook statistical variance to observe!)

The annualized year-to-date vitals say that… V.Tech is up +2% in shooting percentage margin (all on O with D virtually even); V.Tech is up a useful +6% in 3-point percentage margin (most of which was per O&M marksmanship or offensive acumen); and oddly enough… rebounding margin was a virtual push with both teams hovering at –1 carrom and change on the glass for the duration.

The most recent 5-game metrics say that… the Hokies are now up +1% in shooting percentage margin (just a smidgeon ahead on O); however, it is the Panthers who are tickling the trifecta twine and are up a very lucrative looking +9% in 3-point percentage margin (per a little bit more on O, tho’ advantageous enough on D to boot);  with Pitt now up nearly 2 boards in |absolute value| terms as both teams are negative in rebounding margin (although Pitt is less negative in Windex work of late).

So, while scouting Pitt vs. Clemson on Wednesday night… Eye was feeling pretty prone to pick the homesteading team here. Mo’ rest, fresher-legs, and Pitt has to sojourn 322 miles while our Hokiebird’s rest in their very own nest.

Then I ran the Forum Guide digits and the more relevant 5-game trends and suddenly I was feeling more parts pronate indeed.

As I am now officially wondering out-loud (and we all know just how dangerous that can be) … just how many more wins do Young and Co. have in them?

And as absurd as this would have last month seemed… could our beloved Hokiebird get skunked from here on out?

As the virtual 7:3 ESPN split-up above (now) strikes me and Coach Spock as being science-fact or objectively, bizarre.

V.Tech may be a credible slight home favorite in this one (say 51-55% give/take); as it would be a bit elastic to call for the Keystone State visitor to be the favored to successfully siege this Commonwealth Cassell when the A.c.c. visitor only succeeds 30% of the time out on the inter-league road historically.

Nonetheless, this one is much closer to a sister-kisser or push type ‘cap to me.

Pitt is not the worst match-up, Pitt is less healthy than us and we are @home with our freshest legs since Maryland-Eastern Shore.

That quantum sures me up just a jot, 0r a speck.

Making this one speculative pick, …indeed.