The Hokies are hobbled, lame and limping/gimping 306 miles so-by-so-west into this one to put it mildly (may Coach God Bless). Whereas the Tigers check in at 14 up and 8 down in Atlantic Coast Club play this campaign. As Clemson has yo-yo’ed all year though has been a little bit more sprite of late. Nevertheless, what you wanna know is who is gonna win this game, right? Read on, to find… out!

After that, he went to Wright State and amassed nothing less than a 21 win season before eventually snagging the Clemson job -in something of a surprising hire- in 2010.

Clyde Trapp 6′4″, 196 lb. sophomoric and rather animated sideline showman extraordinaire. As “all the world’s a stage” and Trapp plays many roles here. As an athletic combo-G who nets you 6.8 ppg with 3.3 caroms and a couple of dimes (1.7 apg) dropped. This with 33% when dialing long-distance and adding more and more distance to the same (length on his J). Trapp does enjoy an AAAA So.Carolina state championship bling though he had more of a distributing scholastic rep’ and a tag for stepping it up in his bigger H.S. games.

6′5″, 197 lb. rookie voting year or nugget t-Fr. John Newman III is a Wing with a rep’ for soaring type of dunking. J.New’ is said to be a throwback mid-range guy who can get stops as a defensive ace goes to boot. Now mix in 2.4 ppg on 43% long and enjoy the open-court show when #15 breaks windmill dunk from the hipster, free (i.e. he young Kobe dunks from the hip)! And oh “yes”, the no.42 ESPN peg and a threepeat in state titles does, not, suck. As Newman III had so many individual accolades/awards that I got tired of adding them up. (20-something additively when I stopped, counting). 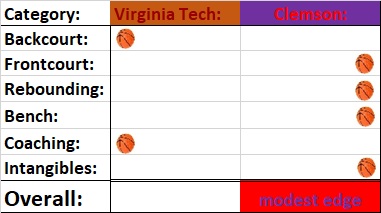 the takeaway:
The takeaway here is… these 2019 Tigers really are a two-headed monster as Reed and Thomas go. Tho’ you do gotta tame ’em both to truly be sure you have a pretty fair to middling chance to catch this Tiger by the tail. 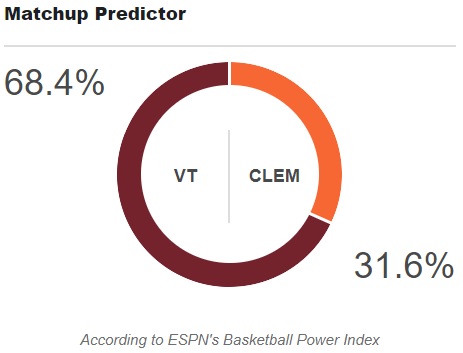 As I gotta say… even though I do wanna favor the (formerly) great Buzzketball backcourt skillset here… even at full O&M strength, Clemson has the look-n-feel of a team that plays well, ugly.

The kind that knows how to go for a roll in the mud and come up lipstick at the end of farmer Brown’s day.

As both teams are a bit wounded, gimpy and limpy here, this one could be a race to sixty, or even a Smokey and the Bandit type of contest or a race to double-nickels (fifty-five).

Our handy-dandy friend the so-called Forum Guide of Graham Houston fame posits, avers and connotes… and is calling for -a seemingly umpossible- 48 point Hokie VicTory. Though it does clearly state that V.Tech has fared much better head-to-head vs. in common round-robin A.c.c. opponents thus far than Clemson has. (even if the total seems fictional indeed).

The year-to-date annualized trends say that… V.Tech is +3% on shooting percentage margin overall, +13% on 3-point percentage margin, although Clemson is up +3 boards in rebounding margin for the season.

However, the most recent 5-game movements indicate that… Clemson is now up +3% on shooting percentage margin from the floor in the last two weeks, with V.Tech now up +6% on 3-point percentage margin with the Tigers nearly holding steady now up +2 carroms in rebounding margin in the last fortnight of the scrum. (i.e. this is all code for Clemson being a bit more efficacious overall on O of late and a little tighter as a halt-unit as well)

With the Gobblers +4% on FT-percentage for the duration.

the call…
The Tigers have been a streaky team thus far this season… they opened with a 5-game win streak, drop two-in-a-row, got to another quad-win-streak, then dropped three more in a row, won one, dropped two more in a row, and now have come back up off the schinde -again- and posted back to back triumphs.

So this Clemson club is either: “resilient” or “inconsistent”; take thy sporting pick.

Upon further inspection, however… we discover the Clemson has only been in tight in two of their L’s. Beaten by multi shots or double-digits in all the rest. Or maybe these Tigers cannot change their… spots.

As their L’ing efforts are generally pretty spotty as they are getting straight beat(en) on the up-n-up. (not woulda, coulda, shoulda type hooping outcomes). Well done. Utensils, plural in ’em.

In this one, if healthy I’d be picking us/V.Tech to win, even out on the A.c.c. road where -as Will has schooled us all- where the Atlantic Coast Cost is no better than three dimes on the dollar for the visiting team. Or a .3oo win percentage surcharge when traveling for A.c.c. play.

As frankly speaking… our Top-8 can go and beat their Top-8.

The only kicker is… our Top-8 is much closer to being our rather insalubrious top-4 right now and that brings any hosting/homecourt A-game punch from the Tigers Top-2 (Reid & Thomas) within striking distance indeed.

Just depends if you feel like our revamped Offense pitch-hits or strikes, out.
(to mix my sporting metaphor)