Today’s word of the day is… upset!

Baller/Qb-Fu’ amassed 2,289 yards passing with the 1995-1996 Oklahoma Sooners starting parts of two seasons before transferring to Murray State. At Murray State, Fuente was named the Ohio Valley Conference Offensive Player of the Year and a finalist for the Walter Payton Award following the 1999 season. He still holds several single-season records at Murray State for a Qb including: most pass completions (24o), highest passing efficiency rating (151.21), most seasonal passing yards (3,497), and most touchdown passes (27) in a year. WOW!

Coach-Fu’ started out under Coach Denver Johnson at Illinois State, who he had played for when Johnson was an assistant coach at Oklahoma; and later on again when Denver was named the head coach at Murray State (…and now you and Paul Harvey “know the rest of the, story”). Coach-Fu also studied under legendary T.c.u. defensive wizard Gary Patterson in Forth Worth. Coach-Fu’ has coached football for sixteen seasons in total.

Big Whistle Fuente was the head football coach at the University of Memphis from 2012 to 2015. He was an assistant at Texas Christian University (T.C.U.) from 2007 to 2011 and at Illinois State University from 2001 to 2006. Fuente attended the University of Oklahoma before transferring to Murray State University after his redshirt sophomore season. He played Qb for both schools. Fuente played a single season with the Oklahoma Wranglers of the Arena Football League before embarking on his coaching career.

Daddy-Fu’ is married, to Jenny and they have three daughters:
Charlotte, Cecilia & Caroline. 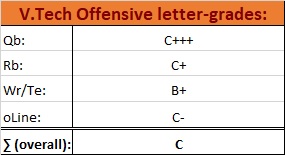 Virginia Tech is 6th in Net Punting, and so is all-A.c.c. third-year, Jr., P, Oscar Bradburn. Oscar ♬”hails from the land down-under”♪, or from Sydney, Australia; to be most specific. Where he Attended Sydney Secondary College’s Blackwattle Bay campus. Where he played Australian Rules Football for Sydney Swans Academy. And where he trained at ProKick Australia, a training facility in Melbourne for Rules and Rugby kicking alike. 6′1″, 221 lbs., as an amphibious or ambipodiatrist punter who punts both ways (L and R). Although he does punt Bob Charles or lefty more often than not and that means he spins his punt’s CCW (or counterclockwise). So set the jugs machine to bassackwards to prep’ for this bloke, mates. Oscar can be a grouch— or so the off-pitch whispers go and he and the ex-Qb1 broke-up over the P’s g/f a couple of years back.  Still yet, Oscar courts a career-long of 69-yards and is likewise whispered to have more leg in the bag than that. Per his having averaged over 45-yards/punt or more for every single scrum this season so far. He also has never ever suffered a career block and as said, this is likely an all-conference leg attached to a likes to fight, guy.

Brian Johnson is r-Jr. year former K2 who got posthumously promoted when VeeTee’s ex-K1 sporting emigrated to happier valleys up north. Bri’ stands 6′1″ and goes 191 lbs. He is a Gonzaga H.S. (District of Columbia) K who had a career scholastic long of 52-yards and practices kicking into the wind and kicking the laces (JIC). B.J. has a very elongated leg-loading motion, which would seem to invite block attempts as his load-time is longer than most. Curiously enough however his leg graded 2nd (some said 3rd) best last year on campus. Johnson is also a K in decline, as he went an okay 75% in 2017, then 66.7% in 2018 and now he is merely 60% on 2019. Although he is 67 outta 67 on P.A.T.’s for his collegiate career.

m.s. the vibes are than VT has a rook-card of a ST’s Coach. Although beyond a stellar P the results to this point a fair to middling, or south of that.

Special Teams letter-grade: the Hokies punter might wanna scramble drill for a work-visa from down-under as he is prolly gonna get ($unday) paid. The rest? So-so to less than that. Accordingly, this is a C– overall ST’s unit for it to boot.

Number of Hokies who could Gobble it up @R.Island=18

That’s the Virginia Tech Hokies mathematics as tent-folders go since the last two HR punches their collective chins caught and stopped. A chinny or head-game leaky looking team to be sure.

“In the last 2 games, post-big adversity moment (Fumble against Duke, Hail Mary against Miami), #Hokies have been outscored 73-21“.
–donmason1320

The only question is… can Qb Vito and the R.Island offense hit an HR-play or drop some trickeration on Vah.Tech early on? Or maybe go for broke on a defensive pick-6 or fumble advancing play. Or for that matter, how about some kinda Special-Teams reverse, onsides, fake, throwback or whatever?

Because what do the R.I. Rams really have to L here as a heavy visiting underdog down in B.c.s., power-conference, A.c.c. country in big bad scary Lane Stadium with only 18 days remaining until “TRICK” or treat?

The hosting Virginia Tech Hokies are a whopping twenty-six-point (VT-26) homesteading betting favorite out on the Vegas big board.

This seems a mite wide to me, or at the very least not giving the Rhode’s Scholars their offensive.edu due.

Fourm Guide: closed until next week when Atlantic Conference Cranks up.

Splits: VT is right at ½ a yard better per attempt and per completion than U.R.I. Showcasing slightly elongated throw-points.

On the run-game end, VT again tallies just over ½ a yard better per rush than U.R.I. Although this is potentially set to change with the addition of the slicker wheels of their rushing Qb Hendon Hooker now taking the Qb1 reins.

Nevertheless, on an overall per/play basis, you asked?

U.R.I. is ramming it home at a none too shabby looking 6.13 ypp average whereas B.c.s., D-1, power-conference Vah.Tech is netting 5.2 ypp. (VT having more total plays mind you).

So there is some modicum of hope if/when coach Jimmy Fleming
can turn this one into a pinball shootout.

Then I ran into this set of numbers from some VT.fb.edu know-it-all who babbles a lot…

Well, they ran the same, exact, entire play-matrix less 1/10th of a percent! They kept their pocketed Qb all-Spread out and asked him to do thing(s) that his pedigree and 20-year’s worth of his Pro-set drop-back passer lifespan thus far could hardly play-calling afford.

Then, however -and entirely curious enough- something called the “Fu’fense” came well off of its pet 60%/40% run:pass split last weekend down @Miami and turned the wheels of the superior rushing-Qb2 loose to the tune of a virtually 70:30 split! Maybe this coach who hails from a family of Pro’ Wrassler’s is not so headlock static after, all?

So, if that rushing-heavy thrust holds course and V.P.I. runs the ball right at our 110th ranked F.B.S. or D-1aa defense this could not only be a shorter game… this could be a longer day. The worst of both worlds. i.e. leaving less game-clock while sitting U.R.I.’s nifty pitch-n-catch battery down; while simultaneously hanging a very modest Ram run-defense out to dry.

Or did that just make too much pragmatic/predictive sense?

Now, you do the maths… the Rhode not taken, indeed.
🐈