Virginia Tech men’s basketball sojourns 173.4 miles down to the Queen City where Buzz and Co. hope to win three consecutive games in order to be crowned as the eventual Atlantic Coast Champion king-bee.

The Hokies have an extra hour of daylight, they finished about as good as they could sans their star Pt.Guard, and now as the no.5 seed, they face a familiar opponent in the Miami Hurricanes. checks in at 14 up and 17 down (and 5-14 inside the A.c.c.). As the seasonal balance-sheet tilted in V.Tech’s favor by a combined 2-o margin in sweeping the ‘Canes overall. Virginia Tech is a seven-and-half opening line betting favorite— nevertheless, what you wanna know is who is gonna win this Atlantic Coast Conference championship round #2 contest as these two teams face off for the third time this year. Read on, to find… out!

Sam Waardenburg and his 5.6 ppg and 3.3 rpg on 36% from 3-point-land and 41% from the floor are paint chips galore. As this ‘Cane pine-squad ain’t exactly confused with the word… deft… as in touch… as in makes. As takers, they gots… makers? Not so much. (UPDATE: Sam’s extra minutes/extra looks have helped; he’s moved ⇑ upward noticeably, especially from behind the arc)

Final year, 6′10″, 232 lb. reserve frontcourter and Lagos, Nigeria native Ebuka Izundu has been forced into picking up some slack and he’s taken up a downright sharp amount. What with 11 ppg and 8 rpg surging display. 65% from the floor and 33% from long-distance do not suck. And neither does 1.4 bpg. As this kid and f0rmer no.70 ranked scholastic baller and high school sprinting star in the 100m and in the 200m’s as well has finally come alive. As this much latent careerist O from a kid with a defensive and rebounding tag is a most pleasant surprise. (UPDATE: ⇑ and away of late, and he is from a homecoming Charlotte area high school)

UPDATE: the ‘cane bench had one guy make more than one shot (for 2 points) vs. very so-so Wake Forrest. An epic pine-squad this just, ain’t’. 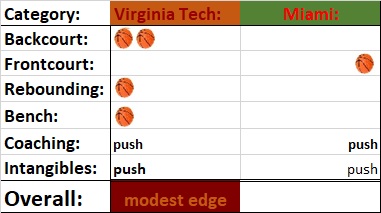 the takeaway:
The takeaway here is… the only thing that I know about Tournament basketball?

Is that I know nothing regarding Tournament basketball.

Well, that is; except for the following couple of things that I do know about Tournament basketball…

Virginia Tech was 4-nil on neutral courts and Miami was 3-2 this year when neither home or away.

Our handy-dandy friend the so-called Forum Guide of Graham Houston fame is calling for a 7 Hokie triumph as try as you might you still can not spell VicTory without the Vee and the Tee. When filtered down the head-to-head Forum Guide says V.Tech by 13.

(THOUGH: do observe… V.Tech’s O is noticeably down in efficiency whereas Da U’s D and rebounding really dropped off of late on efforting!)

With V.Tech is up +3% at the charity stripe for the year.

On Tuesday, Miami slowly, steadily and surely outplayed the Deacons of W.Forrest to advanced to A.c.c. round #2 on right at 21 hours of rest compared to ~120 hours of rest for V.Tech.

The Hokies should win this one. As the Hokies would nearly for sure advance in an Associative best-of-seven (first one to 4 wins) format.

However, this is one-n-done basketball. There is no L’ers or refund bracket either.
Win to stay in, L and go home.

And with a shooting and/or finesse-oriented team -that has had to reinvent its O around its second or third option physically limited PF gone mini-me Qb or Point-F facilitator- stranger things have happened. Like NC.State vs. Hakeem.

And Miami clearly took a shine to this first-time admittance Atlantic Coast Championship hosting Spectrum Center gym. 51% from the floor and 44% long says so. As that’s some fair to middling marksmanship folks— and we don’t yet officially know how well -or how not- our shooters will take to this strange looking three-tone-floor. (lane wood stain=lightest, out-of-bounds=darkest stain, and someone $pent some real live bucks on some borderline Astectic Coast Conference yucks).

“The one thing that I have learned from this (is) you never know who you are until you’re completely backed into a corner and are desperate.“

Or so we all hope as the post-season Owens Dining Hall old-school pressure cooker is just about to heat, up.

Let’s all hope Buzz and Co. “put baby in the corner” stat, and do NOT let Miami hang-around in this one.

As that’s what it takes if you really do wanna show-out at the upcoming so-called: Big Dance…
as we need that to be as fresh as possible for a testy ~21 hours F.s.u., turn.