Virginia Tech men’s basketball got-well-soon(er) and now enjoys a whopping 2-game winning streak. All for having struck down and tamed the direwolves of Nc.State out on the typical cur
-esque inter-league Wednesday nite roadie.

The Hokies now sojourn 7o2-miles Nor-by-Nor-East to play old-school Big East foe Boston College. The Flying Eagles enter the fray at: 2-games south of .5oo or, 7 up and 9 down overall. Boston College is 2-4 or .333 in Atlantic Coast Clashing; modest for 10th place in the A.c.c. at the moment. Or, in a Bo Derek savvy tie with none other than NC2A springtime forecast (seemingly) mightily Virginia Tech. As BeeCee is prolly pretty much where everyone expected them to be; and yet VeeTee is not quite so bubbly. As champagne is just Ginger Ale that knows somebody. –Coach ‘hawkeye’ Pierce. Nonetheless, what you wanna know is… who is gonna win and by how much, rights? So read on… to finds, out!

A former student-athlete, Jock’ Grant played two years at the NCAA Division II level at Georgia College in Milledgeville, Ga. He led the school to two appearances in the NCAA Tournament and to consecutive Peach Belt Conference Championships (1999 and 2ooo). In 2ooo, the Bobcats advanced all the way to the Elite Eight of the NCAA Division II national tournament. He was named an All-Peach Belt First Team selection in 2ooo.
Shows he rides clutch, don’t it?

Big Whistle Grant began his coaching career as an assistant at The Citadel under Pat Dennis from 2oo2 to 2oo4. Gregg Marshall hired Grant as an assistant at Winthrop University in 2oo4, and when Marshall left to take the head coaching gig at Wichita State in 2oo7, he brought Grant along with him. Grant was hired as an assistant at Clemson in 2o1o, serving under Brad Brownell. Grant recruited future NBA players K.J. McDaniels and Jaron Blossomgame to Clemson.

On September 2, 2o14, Grant was hired as the head coach of the College of Charleston, replacing Doug Wojcik. Where Coach-G spotted two so-so-seasons, three near stellar seasons and then three mo’ so-so-seasons. Hard guy to super-peg for it, like the old high school gymnasium climbing-board over on the side, way way back when. Tho’ he did make the post-season twice for Charleston too.

Pretty much the neverwasbeen celtic’s attempted Prybar of their very own.
Hard to say here either way… could be a good hire?
Could be a: Bridge Too… Far?

Grant.edu earned his bachelor’s degree in psychology from Georgia College in 2ooo. He and his wife, Jacci, a 2oo1 College of Charleston graduate receiving a degree in elementary education,
they have three sons: Trey (13), Eyzaiah (12), and Elonzo (9). God (thrice) Bless!

Boston College at a glance:

One #33, James (the amazing) Karnik (the magician) is a combo’ P/F-C who stands in at: 6′9″ and tips the Toledo’s at: a burlesque looking 252 lbs. Strong kid here on tape sports fans. Gotta lift a lot in the northern hemisphere to go Capricorn-One on the Tropic of Cancer here. Has a history of dings/dents, ankles (St.Philip), and soleus’ too… Coach God Bless. Almost looks a stretch-De part in another sport in another life. (See: pic). Surrey, British Columbia native, ‘eh‘. With no word yet from the mutants in the Forbidden Zone. That attempt at Great White North satire aside, Mister Karnik pushed-n-shoved his way to: 13 ppg on 8 rpg and 1 bpg at Lehigh prior to BeeCee. Pretty decent worker-bee kinda digits. Up in Beantowne James has snow-drifted downward to: 7.6 ppg on 5.1 rpg and ½ a swat. Karnik did pocket a: 2o16-17 OSBA championship ring up in N.A.F.T.A. terms, and he does field Canadian National Team experience as well. Prolly is better than his on-again-off-again twig-health shows. Kinda sorta a Baltic Ave. man’s pastier version of a muscular-looking Wes Unseld of sorts— or maybe Mitch’ Kupchak? As his nitty-gritty style nets him a lotta FTA’s; although he is (somehow) down 16% on these this campaign to a mere 6 of 10 on 15′ set-shots with 10-seconds to shoot. Easy kid to like, willing, ready, physical. Just needs to refind his A-game swagg.

7′, 24o lb., transfer P/F Quinten Post (great frontcourt surname) is supposed to be a, well; a BIG deal. By way of: Amsterdam, The Netherlands; by way of: Mississippi State. Which may or may not be code for their very own version of: Amstel, Lyte. Lindy’s says this Post-(up) to be a ‘versatile’ player who can defend the key and rebound a bit as well. 8.9 ppg and 5.1 rpg with the team-pacing 1.3 bpg off the pine is not the worst look. S.E.C. Honor Roll member with metric tons of International experience. As Mister Post is nearly tripling his Bulldog digits; and that’s a hopeful sign with 3-years eligibility remaining due to all the null-year rules.

…pretty tough to be taken with much of anything or taken anywhere with Boston College men’s hoops, which seems kinda ladylike to me upon breaking-tape at the moment. 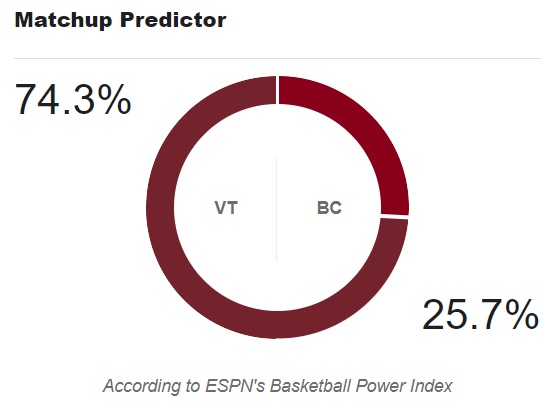 They have a couple of G’s and two solid frontcourters who are prolly putting in overwhelmed and outmanned work as Eye type. Granted, fair enuff.

Tho’ they are seasons plural away from whatever it is Earl wants to reshape and resculpt them into being.

The only calculus for you is… just how far are Mike Young & Co. away from being whatever he wants them to shipshape or ship-out, spring-cleaning 2o2o be?

…’cause in all let Nc.State back into it 2nd-half candor?
…I’ma not so sure on my end?

Our handy-dandy friend the so-called Forum Guide of Graham Houston fame is calling for a rescheduling ask back here… as we coulda had a Pittstop and a t.Heel roundball round-robin numbers to crunch right up until we did, not. St.Nikephoros bless!

The annualized year-to-date vitals say that… VeeTee is up a solid enuff +8% in shooting percentage margin (virtually precisely split O/D wise); with VeeTee up a whopping +17% in 3-point percentage margin (more so on D, tho’ pretty decently on O), and with nobody up more than a couple of tenths of Windex Wipes in rebounding margin on the year-to-date.

The most recent 5-game metrics say that… the Hokies are up +13% in shooting percentage margin (teetering on 2:1 in favor of the O, tho’ D was superior too); likewise, the Gobblers find themselves up +13% in 3-point percentage margin (near equally split between betterment on O & D alike), and the Techmen are up a noticeable +6 in rebounding margin in the last fortnight of backboarding. (This was mostly due to the –6 BeeCee rebounding margin deficit, however)

SWEET-16:
Makai Ashton-Langford, DeMarr Langford, and Jaeden Zackery have started all 16 games and account for nearly half of the Eagles’ 67 points per game scoring average. 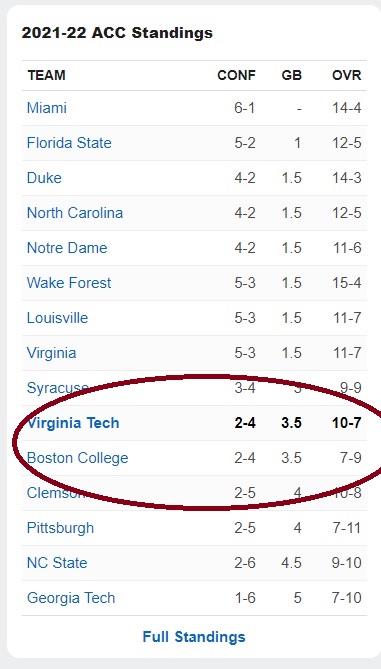 TURNOVERS:
…a little (Hokie)birdie says… Mike & Company and getting 2nd-half worried, here. Watch to see who plays the O&M One and who takes pressure(s) better, here.

Do you see what Eye, mean?

Down by only two points at the half, the Eagles shot just 27.6 percent from the field in the second half on their way to their worst field goal shooting performance of the season at 29.2 percent (19 of 65).

Frosty the snowman be nesting on their mini-me or Jay-Vee parquet.

Then we see who VeeTee catches on-tap up, next.
And you have to wonder if there is a lookahead trap in play here?

We are the better team— who does not always play, better.
Many Faces of Eve wimminz basketball taking it to the men’s, hoop.

Still yet, I’ll side with the (seemingly) better team up on Chestnut Hill…

…tho’ I would not counsel that you be a heavy bettor, here.

…at least not on the under… as these two so-so squadrons have conspired to allow
a maddening +17 ppg as softening or user-friendly defense goes in their
last 5-games combined of late.