Today’s word of the day is… ab·surd

Swinney’s nickname was given to him as an infant by his parents when his then-18-month-old brother would try to enunciate “that boy” when referring to Swinney.

Baller Dabo walked on at fabled Alabama as a Wr in 1989. He earned a scholarship and lettered on three teams (1990–1992), including the Crimson Tide’s 1992 National Championship team. During his time as an undergraduate at Alabama, Swinney was twice named an Academic all-S.e.c. and SEC Scholar-Athlete Honor Roll member. In three seasons at Alabama, he caught 7 passes for 81 yards and earned two degrees from ‘Bama u.grad and Masters in Business Administration. (Making one wonder if/when he will, return, to earn his terminal football degree from the same?)

In December 1995, Coach Swinney received his M.B.A. from Alabama and became a full-time Wr’s and Te’s assistant coach for the Crimson Tide. He was fired with all of the head coach Mike DuBose’s staff in early 2001.

From April 2001 through February 2003, Dabo did not coach; and instead worked for A.I.G. Baker Real Estate on development projects in Alabama.

In 2002, his former position coach at Alabama, Tommy Bowden, made Swinney an offer to become an assistant coach for the wide receivers at Clemson, and Swinney joined in 2003. He took over as Recruiting Coordinator and Swinney proved to be both an excellent Wr’s coach as well as recruiting coordinator. In point of fact, Recruiter Swinney has received several recruiting awards from Rivals.com. Swinney was initially named interim then full-time head coach and weather a few Life of Pit moments thanks mainly to such epic recruiting early on. In the meantime, Swinney has only won seven Coach of the Year awards —all last year.

Dabo enjoys an extremely handsome rep’ for national recruiting prowess, a creative throw-game itself, and is a very qualified modern era gridiron motivator who does well in selfie 2020 Facebook.TogetherEveryoneAchievesMore terms. A pure player’s coach.

Daddy Dabo married the former Kathleen Bassett in 1994 and has three sons, two of whom are Wr’s for Clemson. Kathleen and Dabo Swinney met in the second grade. In the fourth grade, Dabo pulled his strings to get her elected in the Safety Patrol team with him, and then both were elected to the student council!

And God Bless his wife Kathleen’s reposed sister: Lisa.
(because: after gene-testing revealed 90% odds at cancer? Kathleen Swinney had a double mastectomy, followed by a hysterectomy to cut down her chances of developing ovarian cancer. 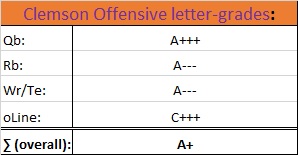 Clemson is 53rd in Net Punting and so is CU P1, 6′5″, 220 lb. r-Sr. year Will Spiers! Which is none too shabby for a walk-on (originally) non-scholarship Punter at a school that has no trouble recruiting much of anything this side of an occasional Tom Brady went somewhere else glitch. The fact that Mister Spiers has been your P1 since he did walk-on as a four-year starting P1 is all the more impressive indeed. Will is also an All-A.c.c. Honor Roll student 4×4 or all four seasons as your P1 to boot. His old-man you may recall is only the former two-sport athlete and Clemson Hall of Famer Bill Spiers, who was starting punter in 1986. And is now the senior special team’s assistant for the Tigers. Son Spiers was also a starting Qb1 in high school ball so a fake-punt is always a possibility here. As he has already run one and thrown two this year. As young-man Spiers has speared the pigskin to the tune of 56 career punts ≥50-yards with a CU career-long of 64-yards (thrice)! A good leg with good hangtime when he directionally wants it. Will is also CU’s traveling Qb4 break glass in case of Qb3 emergency Pivot. This is a good P1, who is right in the first-cut fringe of being a professional Punter. (and aim-high on your block point with an N.b.a. sized S/G of a Punter here).

B.T. Potter is the Tigers K1 at 5′10″ and 180 Jr. year lbs. BeeTee was merely a near Top-3 consensus K1 prospect coming outta Rock Hill South Carolina homespun High School in America three seasons ago. Where B.T. only pocked a perfected four that’s (4) straight state championships in four scholastic seasons! The Bill Russell of H.S. Place-Kickers if you will. That’s all. He sucks. Cut him now. However, and in the meantime… Potter is your back-up double-dip P3 when traveling, and he has a pretty good leg what with range just into the mid-’50s. Where he is only a very handsome 83% on FGA’s ≥50-yards for his collegiate kicking career so far. This Colonel Potter may or may not be, hairy; tho’ he can and has kicked-off for Clemson, and now just imagine him if he had everything right-blocking and functioning five-by-five in front of him on FGA’s? As he flat-out misses FGA’s less than he gets snuffed-out! As this kid to is a fringe Sunday Pro’ at the moment.

Special Teams letter-grade: “Aye” Clemson is not lacking leg-talent(s) or any manner of ST’s talent(s) itself. Tho’ seven, that’s (7) blocks-allowed at this level of talent(s) is a damn shame.
And their coverage units have mo’ talent than this. This group is vastly better than this grade; avers, posits, or connotes. However, D+++ is all I can do here).

Number of Tigers who could claw @Tech=18

…the takeaway here is that it would be impious to the point of outright lying to type anything out other than… VeeTee is likely to get took. 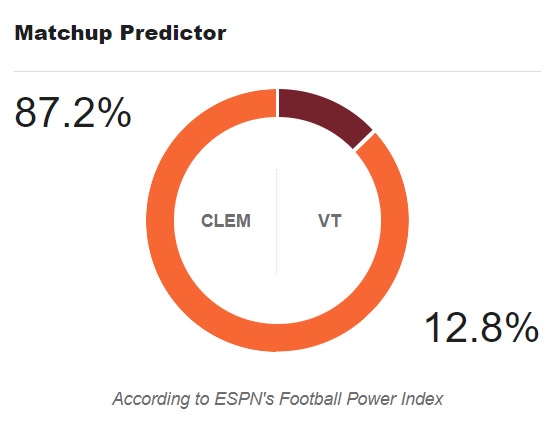 As in… could Vah.Tech rightfully take Clemson’s best A-game punch bang on the chin and not get sparked-out if their best shot did come crashing home?

Now mix in who knows what kind of whiskers we have leftover after Thanksgiving Break and you quickly R.A.T.T. see which team appears to be the cat’s: “meow” here.

And as we and the ultimate tool time Carpentry Coach (St.Joseph) all know…
lying is for… rugs!

Tough to put Dabo and company south of Fu’ and company here with a straight face.
Although, only one side is coaching for their jobs in this one; or is that rather in
the next one? And that one makes this one a Catch-44. Do you save things
you might need for upsetting uva or go fo’ broke here?

Either way… hard to say this favors the O&M this week.

(next week it just might however as the O&M chips get Jeffersonian big-n-blue).

formulae here favors:
The noticeably deeper, more Constellation Class type of Recruiting club.
And this just in… rain is rumored to be, wet.

Simple as that… as the downrange optics are blurry at best on VeeTee catching or dusting many CU kids if/when things break contain.

the skinny…
…is just that. Who came Thanksgiving Break back tight-n-right and who came back thick-n-fat? As Clemson’s having worked last weekend prolly keeps them in better-fighting nick than us (what with all we have had sporting-O.P.E.C. turmoil going on and going-in behind the scenes).

Lo.FM Analysis:
Clearly, 2020 VeeTee is just not a stalwart or Stallworth type 3rd-down team. Clemson sits back a little bit more on their early-down defensive sets; although they have the Jimmy’s and Joe’s to out-athlete most any opposing X’s and O’s. EDGE=CU (pretty big too)!

TTT Analysis:
You should go’on and expect some backfield stops to be inflicted behind the LOS (line-of-scrimmage) from both clubs in this one. You should also prolly expect Clemson to inflict
a few more. And although reasonably competitive, the EDGE=CU, here.

The most recent 3-game splits say: both squads have backed-up on the ground (–55 from CU and –80 from the Fu’fense); although CU has nearly covered this bet threw the airwaves. VeeTee’s O&M eggs and j.Ham halt-unit is only 6-yards removed from being the yearly same. Although the Tiger defenders have shifted into reverse to the tune of almost –60 more yards allowed aerially speaking of late. As mind-numbingly enough… it is actually V.Tech who is up ➕ 30 aggregate yards O to D over the most recent three games. (even with both clubs in decline).

The H/A splits say: that Clemson is better on O on the road and yet worse on D and these two markers less right at one first-down basically canceled each other out. Whereas VeeTee actually turns up at ➕35 yards/game better at home than away with most of the betterment coming from the Tech defense. Even if Clemson is still up right at 65-yards to the good in your house or about by one full play when aggregate comparing VT home head-to-head CU away.

(admittedly: these is sum dang strange splits folks…
although this is why you run the numbers,
not yo’ mouf!

Our handy dandy friend, the so-called: Forum Guide of Graham Houston fame is merely for a mind-blowing ➕108 point Clemson-matter vs. VeeTee-antimatter total annihilation! Even taken pro-rata; this is still calling for a 4-score kick right in the Techmen can. (which seems lyte as canned goods go).

Eye honestly don’t know?
Do, you❓

As there are cogent applied sports-psyche arguments to made for each… and yet you only have a decent to moderate shot at one of these two contests.

As the TSL.com voters have spoken… 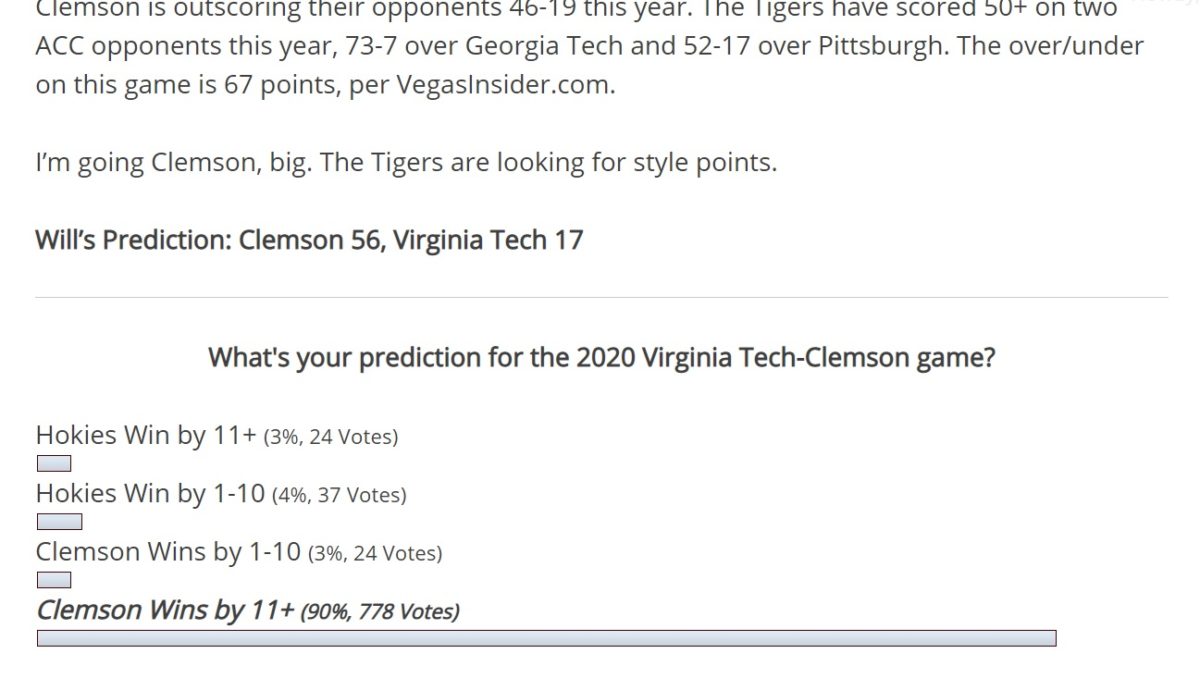 Eye do however know that I wanna do whatever it takes to have my best possible shot to get this sagging -if not foundering- Duck Pond team back up just in time delivery wise for uva. Nonetheless, I also know that not really showing up for Clemson really does set a spit-the-bit and let go the O&M rope tone.

If you will notice… this preview is a little shorter than most… why you ask?

’cause Eye ain’t m.Poppins, Eye ain’t gots no sugar, NutraSweet or saccharine for you S.A.T.T.’s. (sugar all the time).

I do however keeps an oversized umbrella and you are most welcome to the same. So, come on in outta the not R.A.T.T. TSL rain and get some warmth up against the real hot stove rotisserie topic(s) du jour.

As it will take a whole lotta Clemson’s help before they VomiT up a Tech Triumph for us here. As we may or may not even know where we chemistry wise really are post getting toxicologically Dering Hall totally acid-washed up @Pitt.

Although I’ma truly fenced on how many uva-bullets you bunker and/or try to at least conserve— if not outright, save.

I do know that he who loafs in this Terminal Contact sport will get baked.

I’m just hoping that Dabo is friendly enough to NOT set his oven to: BROIL.