The Hokies are no longer butter. They are no longer parquet. Not even holding onto homecourt. Mo’ like ParKay of 70’s (fake-news) butter spread. That’s the news-news. The (hopefully) good news is… the Hurrying Hokies are literally only four, that’s (4) shots removed from having won their last three contests. Which would make us a vastly mo’ valuable Season-hyphen-one on the year. And “Aye”, we are also just five, that’s (5) shots removed from being season-hyphen-nil, perfected. And yet again… if my Aunt Kim had nut-n-a-bolt she’d be my Uncle, Tim. Now an altogether reasonable looking North Carolina State rolls into town at a post-season qualifying looking: 11 up against 4 down; and .4oo (2-3) in intra-league play. Nonetheless, what you wanna know is… who is gonna win and by how much, rights? So, read on… to find, out!

Baller Keatts was a two-sport standout in football and basketball at Heritage High School in Lynchburg, Va., and went on to play four seasons of basketball as a Pt.Guard at Ferrum (Va.) College.

Coach Keatts began his coaching career as an assistant at Southwestern Michigan College during the 1996-97 season. He then went to Hargrave Military Academy as an assistant coach for two seasons before being promoted to head coach in 1999. In 2001, Keatts moved to Marshall as an assistant coach. He returned to Hargrave in 2003 and served as the head coach until 2011. During his ten years (over two stints) as the head coach at Hargrave, Keatts had a record of 262–17 and won two national basketball championships; with three national runners-up. Hargrave produced 103 players who signed NCAA Division I men’s basketball scholarships during his 10 seasons and 18 others played on the NCAA Division II level.

In 2011, he earned a degree from Marshall. Keatts then joined the staff of Rick Pitino at Louisville and was a part of the Cardinals’ 2013 NC2A national championship team. That year ESPN.com named him the third most respected/feared assistant coach in the nation. WOW!

In March 2o14, he was named the head coach of UNC Wilmington (UNCW), succeeding Buzz Peterson. In Keatts’ first season at UNCW he was named C.A.A. Conference Coach of the Year after leading the Seahawks to their first conference championship in nine years, and their first winning season in seven years.

In his second year, Keatts repeated his rookie-year double, once again winning the C.A.A. regular-season championship and Conference Coach of the Year. In winning the 2o16 conference coach of the year, he became the first coach in C.A.A. history to ever win the award in consecutive seasons. Late that spring he was hired by North Carolina State.

An interesting medium-hot commodity is this lowercase coach-k, is he not?
That said… is he All Coaching Conference fo’, real?

Keatts and his wife Georgette, have two sons, K.J. and Kaden.

6′9″, BIG ole 285 lb., Grad’ year and totally bruising D.J. Burns Jr., puts the ‘power’ in the Four or the P/F spot. Deejay comes at you from: Winthrop. Where he was merely named Big South Conference Player of the Year and Big South All-Conference First Team last season. This after an r-shirt debut year @Tennessee. Consensus **** or 4-star baller whose recruiting topped nationally at 1o4th on the 247Sports list. 9.7 ppg with 4.5 rpg and the team lead with 1 bpg might seem a bit trite from all his previous honoring(s), be they Big South or not. As this Burns kid is a 22ov P/F overload down-low in the paint. And the 16 ppg last year @Winthrop makes you wanna see him garner more substitute touches here. As this is one hefty-looking and fun-to-watch mauler at the Four. (UPDATE: REALLY G.n.c. strong stats on a per minute basis of late).

The pride of: Belgrade, Serbia, or one Mister Dusan Mahorcic, is a 6′1o″, 235 lb., imported grad’-transfer baller formerly of: Illinois State. Where the mid-30’s looking and is the one you wanna pick to go get carded to buy the weekend brewskies; Mr. Mahorcic dropped you: 9.9 ppg and 7.2 rpg. This after collecting you: 5.5 ppg and 4.1 rpg out in Utah prior to all of that. Prior to any of that, Dusan was at: Moberly Area Community College, and even before that he was at: Lewis College. Way prologue to any and all of that… Du.Ma. was a six-footer when he entered Serbian high school and yet he was a 6’9” when he left. WOW. Stranger Things indeed; as the game is still a bit new to him as is any change of addy form from the local U.S. Post Office. An interesting kid, as you gotta wonder where Mahorcic is if he had been playing roundball prior to 2o15? Sadly, however, Dusan has a history of suspensions (plural) and knee injuries the same (St.Mungo and St.Nikon help alike). Nonetheless, 8.7 ppg and 6.6 rpg on a team-leading 64.3% does not suck.

Fourth-season, Providence transfer-in baller: r-Jr., 6′8″, 21o lb., Three or S/F Greg Gantt is apparently back after what they were calling a: ”abdominal” injury. (St.Elmo’ bless). Also back would be his incoming 1.5 ppg, 3.5 rpg, and a couple of apg in Frying terms. No. 62 overall outta Fayetteville, Nc. from 247Sports. A.c.c.odrdingly, a lot was expected here. Ditto only being crowned valedictorian of his high school graduating class. So, HS.edu props insert (____) here, check. As this guy could and prolly should be an overmatched load at the Small-Forward spot as what the book says is a: “inside-finisher” most nites. Gregg has cut about ~10 lbs. since we saw him last in an attempt to get mo’ athletic on the Inside.

* former starter: 6′11″, 225 lb., Ebenezer Dowuona. C-P/F is a real scr⊕⊗ge on the … pine… too late? Ebenezer -Scrabble points- Dowuona comes to the U.S. by way of: Accra, Ghana. Where he was found/discovered and was the 20th-ranked Center by ESPN.com. He got here and did pick up one trip-A or AAA Georgia State bling. Seems to be more of a stopper/plugger who eats near the rack on O. Not quite raw, just more base defender (like a Baltic Avenue’s man version of Mutombo or something akin). His mpg has really diminished in the last few weeks… and he nets you 2.2 ppg on 1.5 rpg and then sends back a shot. The caroling 55.8% from the floor tells you where he lives. More of a depth provider than an available starter at the moment, tho’ he is a lean B.M.I. cut-up kid on tape. This is only his third season of hardwood too… so, could he be a c.Dickens of a baller come 2o24? 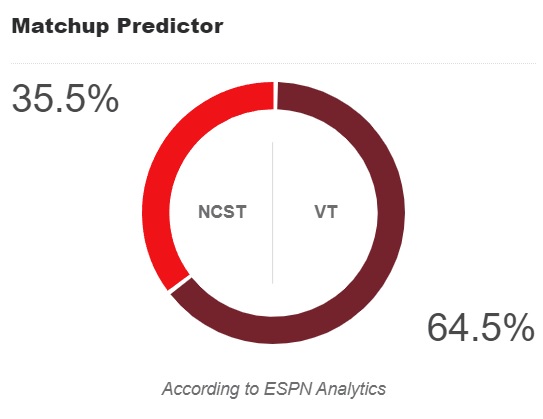 I’ma not real sure if I am mo’ taken with the recent V.P.I. decline.

Or, with a surprisingly well-rounded State squadron who is at least making a passing attempt at halting anyone or anything this campaign.

The recent Techmen’s sag… does not super discourage me due to the games being pretty damn competitive, and due to having two real Talents on the O&M pine {sic: Rice & Hunter}

State on the other hand offers me a lotta intrigue… as coach-k has melded this buncha castoffs or imports (‘pending whom you coaching sewing-circle poll) rather dang quickly and rather dang effectively.

That, and Mr. Tarq’ and the burly Mister Burns are most entertaining to watch.

Our handy-dandy friend the so-called Forum Guide of Graham Houston fame is calling for an |absolute value| 11-point Tech Triumph in this one here. (As in… both teams got beat by Clemson as our single-data point went. It is just that Vah.Tech grabbed a bit more Tiger, tale).

The annualized year-to-date vitals say that… VeeTee is up +3% in shooting percentage margin (per: being a little better in floor-O and in floor-D alike); these two tallied a virtual dead-heat in 3-point percentage margin (oddly enuff… both are within canceling tenths of each other in 3-O and again in 3-D each), and yet State is up close to ~ +3 carroms in rebounding margin for the duration. (State has the edge on the O-glass with D-glass virtually similar (1/1oth separation if keeping score at home).

The most recent 5-game metrics say that… the F’n Gobblers are (now) up close to +3.5% in shooting percentage margin (as in… and the stickler is… both clubs are a combined –11% or nearly c0ld on O of late!); this one graded nearly Swiss or neutral in 3-point percentage margin recently (per both being down about –2% from deep on O and yet both are virtually identical in defense of the 3 recently compared to the season), then, this one too grades virtually tied and in rebounding margin in the last fortnight of backboarding. (Both calculus at +1 in rebounding margin off the fiberglass recently, although this is due to bonus O-rebounding from each squad due to a surge in missing from the floor from each club in the last two weeks to boot).

Ray Stevens 💓’s… streaks!
The Hokies have gone 8-1 at home. Virginia Tech has a 1/3 record in games decided by less than 4 points.

The ‘Pack is 2/3 against conference opponents. NC State averages 1o.3 turnovers per game and is 12-2 when turning the ball over less than opponents. (strong barometer/forecast ^^^there^^^ men).

Gettin’ defensive:
“It may have been the best defensive game that I’ve coached since I’ve been here,” NC State coach Kevin Keatts said. (Re: punking #16 Duke last time out). ^^^this^^^ subsequent to… coaching sewing-circles ‘whispers’ said coach-k really questioned/challenged his teams’: toughness after getting done out by Clemson on a homely late game fade @Clemson.

Chillin’, out… 24o6o, 1o1:
In Wednesday’s 65-68 ‘rong way vs. the Tigers, the homesteading Hokies shot an uncharacteristic 31.3 percent from the floor. Their nadir or Duck Pond low-h2o mark in a game since coach Mike Young’s first year in Blacksburg (2o19-2o).

Tech is up a nice +4% at the charity stripe for the year.
VeeTee is a .888 host; whereas Nc.State is .ooo (o-2) as a guest.
These two are actually tied in R&R; nobody is up anything recently here.

So, the last time Eye was want to call for overtime— missed that by one, single, solitary, (albeit: 2-point); shot!

I was also want to question the whiskers of these All-Championship Conference defending titlist kids.

And frankly, I still am…

…however, Eye kept digging and found me two more thingys… (as recall: I could not find what nearly did not O&M defending conference championship team(s) data point(s) exist. Per a merely twice Technically trophied or crowned or ringed —as only 2 conference-calling V.P.I. data points existed prior to 2o22 itself). 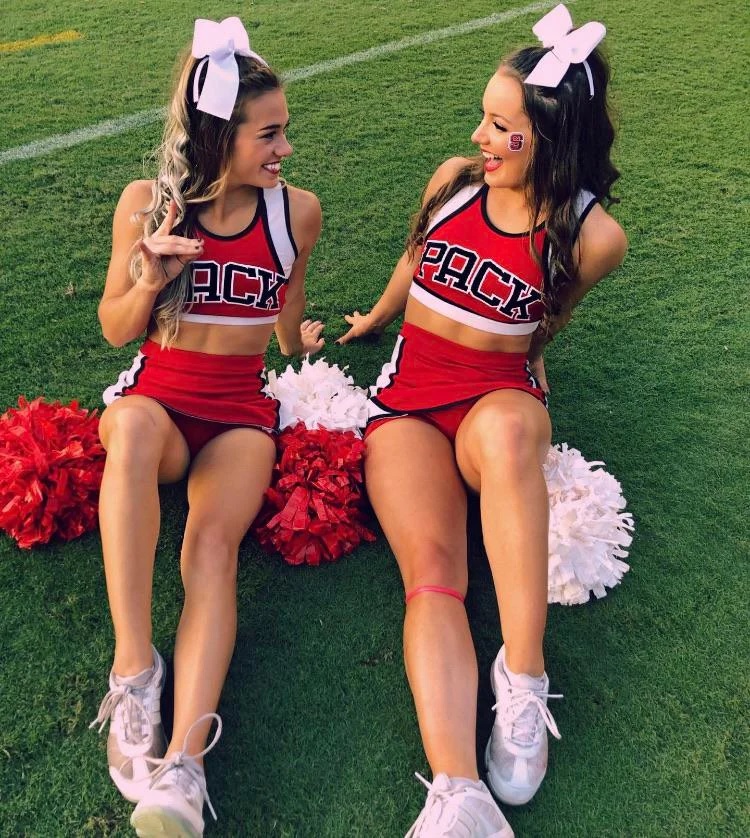 …that all do say, someone needs to go’on and call this early January one, right?

State is not the same bad (i.e., crotchety style of play) match-up that BeeCee, Wake, and Clemon all three were for us/VeeTee. 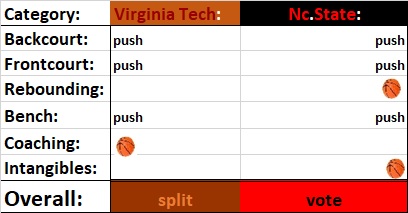 They are however a challenging ‘blur’ of a match-up for a systematic old-school traditional One through Five home-position abacus of a highly deliberate coach such as Mike Young.

Consider thus… V.Tech=8th from last in Tempo/Fastbreak, or nearly molasses or aging Keltics with Bird/Parish/McHale stall-ball most comfortable indeed. We are a ½-court team through and through. Whereas State wants to fun-n-gun and get out and flat-out, run.

That tells us this one is all about the… throttle.

Whoever controls pace outpaces the made tempo-uncomfortable other team here.

Thus, making for a game of: Coach Æsop basketball.

Or, whom do you fable here?

The tortoise or the hare?