Virginia Tech men’s basketball (rematches) with a likely to be pretty revancheful and therefore pretty upset looking Duke basketball team in the Sweet-16 over in the District in what could very well forecast as being a pseudo-home-game for the Hurrying Hokies.

The Hokies did clip Duke inside our very own Cassell 31 days ago. Never balled pundits will have me say that was sans Zion. As this Zionite is the alpha Testament baller in all the land right now. No if’s, and’s or butt’s about it. Although V.Tech was minus “5” last time out vs. the gets Buzz and Co. sky high like the International Space Station Dukies as well. So each team is much closer to their ceiling -and/or possible roof- for this one than either team was a month ago. Nonetheless, you wanna know who is more parts elite and less parts, sweet. Read on, to find… out!

Javin DeLaurier is yet another Commonwealth (Shipman, Va) backyard escapee, and this 6′10″, 234 lb. third-year baller has the physical build of a mini-me Dwight Howard. As this Javin is a strapping strong kid upstairs across the shoulders when he posts-up down low. Javin only comes with the tags of being the “most athletic” and “most electric” finisher on the entire Duke roster. As he runs the court thoroughbred well and is a strong internal baller on both ends; all that on 3.7 ppg, with 4.3 boards, a swipe and a block on an absurd 72% in relief, if you need him. (UPDATE: pretty close to where he was or a ⇔ or flat grade for this kid)

6′6″ and string-bean 184 lb. Alex O’Connell kinda looks like he walked off The Outsiders set as an underfed “greaser” who put on some kayoed “soc’s” Jordache threads and effortlessly acted the part. Seriously, Alex looks the L.L. Bean boy-model part and he’s basically the lowest ranked (no.80) national recruit in the Duke rotation— poor Duke! Alex and his 4.6 pine-squad ppg are said to be dynamite in the open-court and he can dial a floor-spreading long-distance at a mere A.c.c. leading 54% on his 3’s last year (39.5% this season from deep)! (This kid may be a Pro’ just on his depth alone). Plus he Alex courts one of the rare stop-on-a-dime pull-up games this side of the Virginia Squires and a certain Dr. who made a lotta “J”‘s the very same way. With 1.8 rpg and .6 spg just ’cause. (UPDATE: defense and rebounding are both just a little off, ⇓, tho’ not by a lot) 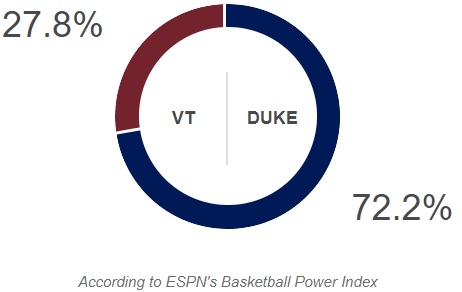 The takeaway here is… it is gonna take a lot to upset 7.5 point betting favorite Duke in this one. And “aye”, Eye already know… this just in b.street, rain is rumored to still be… wet.

Zion is the biggest NCAA overload Eye’ve seen on breaking tape since Mr. P.A.T.T.+++ Coach Dale Brown had Shaq (and Stanley Roberts with Jackson) down @L.s.u. way-way back when. Zion is everything -less a measure of on the ball skillz- that Mister Ohio (‘bron’bron James) ever could have collegiately ever wanted to be. As this guy is just a handful, noticeable foot-limp or not. A damn dawgg of an NCAA power-forward. A 220v heavy-duty industrial P/F or Four who surge suppresses you with his shot-making ability and Tacko gulping late when he needs too. And oh yes, Zion is so great he’s single handily overshadowing the greatness of A.J.B. in his own right. Think about that… and think on a Kerry Blackshear Jr. personal foul’s prop line while you are at it to boot.

Duke is .9oo as a neutral whereas Virginia Tech is .875 when neither home or away.

Our handy-dandy friend the so-called Forum Guide of Graham Houston fame is now calling for a –8.6 point Hokie VomiT this time out. As Duke looked better in round-robin terms vs. F.s.u. then we did— despite our having upset Duke head-to-head.

The annualized year-to-date vitals say that… this one is actually a rarefied “even” in shooting percentage margin, tho’ V.Tech is up +6% in 3-point percentage margin (with Duke better on D and VT even better than that on O), with Duke up +5 in rebounding margin for the duration.

The most recent 5-game metrics say that… Duke is now up +2% in shooting percentage margin (a total reversal, per VT now being better on D and Duke being even sharper than that on O), with V.Tech now up a whopping +14% in 3-point percentage margin (VT with both O & D improvements alike), and yet Duke is now up +6 in rebounding margin in the last fortnight of play (as has been Duke slightly Windex better and VT slightly fiberglass worse).

V.Tech is up a shiny +8% at the charity stripe for the year.

It would be just downright dishonest to come in here and say that Eye expects that Virginia Tech could upset Duke in a more authoritarian best of seven series. Or in a first to four wins or Associative format. That kinda basketball typically renders who really is best, better.

However, this is a 40-minute one-n-done format. Single elimination ride or die and yes NC.State and Phi Slamma Jamma and 1983 all just called.

That and shooters shoot. And as said before… if our shooters suddenly catch fire 267 miles nor-nor-east over in the District? Look the “bleep” out. As we have the FT-check-mark to nic’ this one late in a 15′ set-shot dead-ball contest.

Because ain’t nobody gonna want a lotta O&M work if we suddenly spark-up and get hot like the Sun from distance. All the more so with most everything I track just a little bit down and/or off for Duke. As this hardwood team may have statistically/technically peaked earlier this year.

Now, all that being rightfully said… with Buzz’s departure whispered to be imminent; (sadly) with yet another Cheech & Chong Outlaw “good clean dope” baller, and with all of that conspiring to make this the last shot coach-K (pardon the hoops pun) has @Buzz?

Methinks all that gamesmanship of introducing himself anew to coach-K each and every time pre-game is gonna come back on Buzz here.

As this is coach-K’s last shot to rub his upstart Atlantic Coast Coaching rival’s nose in it beyond some unseen A.c.c. vs. S.e.c. out-of-conference hook-up or Tournament draw. As coaching the verb and holding court on this level of elitism is indeed the realm of real live white-board 1 through 5 diagraming stars war(s). And although Eye is one of the extreme few who rates Buzz as just north of K in pure in-game coaching mechanics…

To put it another way…

Obi-wan is about to master “Luke“,