Virginia Tech men’s basketball returns to the court after another mercurial (lack of) efforting over in Dayton, Oh.

The Hokies are good, yet up-n-down like a Smoothers Brother’s yo-yo routine this hardwood campaign thus far. As said, a pretty good team that’s a bad one to figure. Now they draw the Bonnies of St.Bonaventure in the made for streaming/telly: Hall of Fame Shootout. St.Bonaventure is a very on-trend 8 up against only 2 down. Or the squadron who sports the loftier record here. As these Bonnies are no gimmie lay-up drill T.G.I.F. afternoon down in PhotoHokie’ville or at the: Spectrum Center, of Charlotte, North Carolina. Nevertheless, what you wanna know is… who is gonna win and by how much, rights? So, read on, to find; out!

Baller Schmidty played and graduated from Bishop Feehan High School in Attleboro, Massachusetts in 1981, and is inducted in the Bishop Feehan Hall of Fame. He is still the school’s second all-time leading scorer with a total of 1,450 points. Collegiately he ran ball for the Boston College Eagles from 1981 to 1985 under coaches Tom Davis and Gary Williams.

Whistling wise… Coach Schmidt is the current men’s basketball head coach at St. Bonaventure University. He took the job at the start of the 2oo7–o8 season after holding the same position at Robert Morris University for six seasons (2oo1–2oo7), compiling a record of 82–9o. Prior to becoming the head coach at Robert Morris, he served as an assistant coach at Xavier University under Skip Prosser from 1994 to 2oo1. During the 2oo8–o9 season, he led St. Bonaventure to a 15–15 record, and an appearance in the Atlantic 10 postseason tournament, the school’s first since 2oo5. Schmidt has led the Bonnies to the Atlantic 10 Tournament Championships in 2012 and 2o21 in addition to the Atlantic 10 regular season championships in 2o16 and 2021. In 2o16, he was named Atlantic 10 Coach of the Year. He is the all-time wins leader in St. Bonaventure history passing Larry Weise (2o2 wins) on February 17, 2o19. Schmidt has coached 24 players who went on to play professionally including Andrew Nicholson and Jaylen Adams.

Excluding intra-league Conference Torney’s, Schmidt is a conspicuous .2oo coach in the post-season, Coach Schmidt has hammer locked 3 different A-10 championship rings: (2o12, 2o16, and last years in: 2o21)! He has also notched 2x Atlantic 10 Coach of the Year (2016, 2021) Awards in his coaching belt. Also, he was a High School football coach when breaking into coaching itself. Kinda a Vincent Thomas Lombardi Jr. in reverse, who coached a lotta hoops (of all the things), recall. He has also been a: health-and-beauty aids salesman along the way to boot.

Poppa Schmidt is a native of North Attleboro, Mass., Schmidt and his wife Anita have three sons: Nick, Derek, and Michael.

Nick was an All-State player at Olean High School in 2o13-14 and he is now an assistant coach at Catholic University after serving two seasons on the Bonnies staff as a graduate assistant.
In March of 2o16, Derek and Michael helped Olean High to the state championship.

Abdoul Karim Coulibaly is an interesting looking: 6′9″, 238 lb., relief-Four in his second season by way of: Bamako, Mali. A natural Koufax (or, lefty) which gives him that William Russell defensive or shot-blocking edge. A.K.C. represented his home nation at the 2o19 FIBA U-19 World Cup in Greece, helping guide Mali to the championship game after averaging 13.1 points, 6.9 rebounds, 2.4 assists, and 2.1 steals per contest during the tournament. He also cut down the dark-continental nets with a FIBA U-18 African Championship in 2o18. Which is one mo’ African Title than you or I combined. I dig that. Additionally led his Scottland, Pa, Prep School to a #1 ranking a couple of years back at 16 ppg and 12 rpg. So, there may be some D-1 developmental upside here at 57% overall; tho’ 58% free-throwing speaks to his rawness overall as well.

6′5″, 21o lb., r-Soph., Linton Brown is a substitute teaching Floridian S/G. He plays more for his defense than anything else. 2.8 ppg with 1.7 rpg on 17% dialing long-distance. Prior to St.Bonnie, Linton teed one up at: Indian River State. Where he only earned junior college First Team All-American honors following the 2o20-21 season after averaging over 18 points per game while shooting over 51 percent from the floor and better than 48 percent from beyond the 3-point line! So, clearly way more is expected here. Time=tell on if his O-game will perk back up. Tho’ his history is an attractive one, as he had a number of 30+ point games at Indian River St. 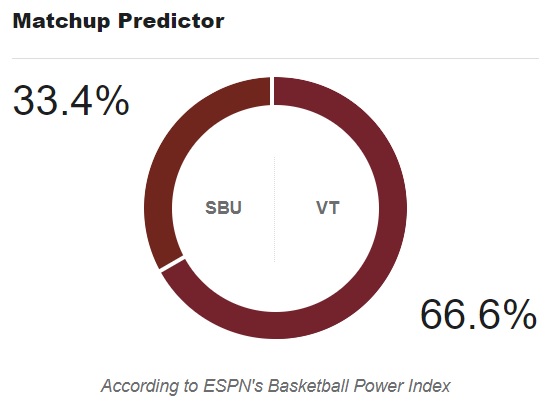 …this is sure a 10 on the Mohs Scale of Hardness hard to predict this V.Poly.I men’s hoops club of late.

As a backup G just went Frequent Flyer right on Ohio by us last time out.

Now, we merely draw the team that all of my preseason mags have labeled A-10 numeral uno back in September!

The only (maybe) good news is that we may not be tapping them at full strength; as you have already read above.

And frankly after getting O&M Jet Blue discount flown?
We need any lofty advantage we can gets.

The annualized year-to-date vitals say that… St.Bonnie is up +1% in shooting percentage margin (being nearly equalized on O & D with VT alike); with VeeTee us sporty looking +12% in 3-point percentage margin (more on D tho’ up on O 5% as well), and St.Bonnie us up +1 in rebounding margin as Windex Wipes go year-to-date. (Both are positive, S.B.U. is just a bit mo’ P.A.T.T.).

BLOCK PARTY: Virginia Tech is 6-o when it blocks at least three opposing shots and 1-4 when it falls shy of that mark. Saint Bonaventure is 8-o when blocking four or more shots and o-2 this year, otherwise.

LENGTH MATTERS: Virginia Tech has made 8.6 3-pointers per game as a collective unit this year, which is second-best among ACC teams.

WHISPERS: say… Coach Mike is not happy with our recent Turnovers and/or bad shots. Which has led to too many opposing run-out hoops.

So, oo’s report that Lofton did return to practice on Monday— after suffering a high-ankle-sprain a few weeks ago.

That moves him a shade past QUESTIONABLE to me.
Tho’ their people said it is: “unclear” if he will suit up.

Could still be a game or even two away at this point in his recovery. (St.Philip bless some mo’).

As one could venture to say that sans Lofton?
Vah.Tech has a fair to middling shot to jump a lame-looking St.Bonnie team.

If, however, Lofton is back and is reasonably gamey?
We could be in for a rather, adventurous day.

Or in other words… you really wanna make an OPT run at this one?

Wait. Wait until 4:01 PM and get the Lofty or letdown, news.

As this is about as Veteran and stability drove of a hoops team as we will see all year.
Honestly, Eye’d have to favor them at full strength. As they are prolly NC2A bound this spring.

And we need to regulate on our post-season planning soon enuff.
As a possible repeat, A-10 Champ’ scalp would not be a bad out-of-conference scalp to take.