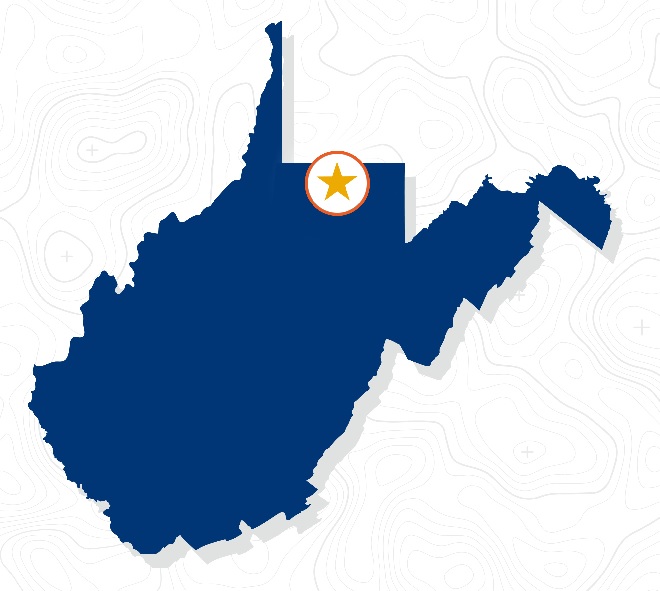 Wr Brown played football at the University of Kentucky under head coach Hal Mumme and his assistants, Mike Leach and Tony Franklin, before transferring to the University of Massachusetts Amherst. He did earn all-S.E.C.edu honors as a Wildcat.

Student-athlete Brown earned his bachelor’s degree in business management and his master’s in business administration from Massachusetts. While at UMass, he was an Atlantic 10 All-Academic honoree and an NCAA Division I-AA Athletic Directors’ Academic All-Star team selection. Impressed!

After that baller Brown went Coach Brown started his coaching career as a graduate assistant at UMass, then Sacred Heart, and then Delaware. Then Brown caught his big break as Brown was named the offensive coordinator at Texas Tech under new Red Raiders head coach Tommy Tuberville. Then after a year as O’cord at Kentucky Coach Brown blew his first big whistle down at Troy.

At Troy Coach Brown tallied Troy’s first 10-win season since joining FBS in 2001 in 2016. He scored a massive upset over all-galaxy L.S.U. and he ended with 10, 11, and 10 wins again at Troy. Making him something of their mini-me Frank Beamer. He also improved his team’s G.P.A. and graduation rate every single season. Troy.edu props insert (_____) here. And has acquired something of a program-wide renaissance man’s tag for it to his sizeable credit.

Most curiously enough, Coach Brown is perfected in his bowl career. (4-nil). And he has been the betting ‘dog every time less once. This tells you the man can break a tape and really preps shrewdly on extra time.

As this is one pretty dang educationally accomplished collegiate football coach folks.
Not many have anything anywhere near his curriculum vitae classroom props.

Daddy Brown and his wife, Brooke, have two daughters: Adalyn and Anslee, and one son, Dax.

p.s. this D has a knack for Brockwōrst type p.fouls in it.
Keep your head on a swivel, they will take shots!

O-tutorial:
During his tenure at Texas Tech, Brown perfected his NASCAR spread offense. The offense created by Brown focused on players running to the line immediately after the play and quickly snapping the ball before the defense could get set. The offense requires speed at every position to be run the way Brown envisions it. The focus of the offense was to snap the ball 8 seconds after the previous play. Recall there are some leftover 3o4 tinfoil richrod elements here… although unlike richrod’s 3-speed O (turbo, Indy, jet) this O is all Hot Wheels or burn-rubber as best it can. 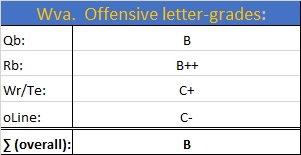 Special Teams: (about 1.5 return, one was a part-timer last year)

w.V.u. is 116th in Net Punting and oddly enough so is P1 Tyler Sumpter. Ty’ is an r-Sr. sixth-season booter and clearly experience and learning curves are curvilinear enough here. Ty’ is a Troy transfer-P1. As he followed his pet coach to Mo-town WVa. Where he had logged a noticeable 25-FG makes down in ‘Bama! So, he can (easily) pitch-hit in a K2 pinch. He was 1st-team all-State in Alabama as a P1. He has not missed a collegiate P.A.T. He already enjoys his Troy.edu Education undergrad B.A. Ty’ also handled KO-duties down @Troy for a couple of seasons so his foot seems heavy enough. And frankly, it is almost a bit of a surprise that he is only per se punting here? Although he seems to be more of a directional/hangtime coverage P than a Ray Guy pure boomer. Sill a better than average P1 to be sure.

Casey Legg -great surname- is w.V.u.’s r-Jr., K1. He is serviceable thus far as a K1 as his career 69% F.G.A. make-rate avers. Legg has a college career-long of 51-yards; though his reasonable range seems to hover in the mid-40’s give/take. Legg only has one make ≥45-yards career-to-date. Although he’s a forty on campus what with being Academic All-Big 12 First Team, with a perfected 4.0 GPA! .edu proppers @Casey! That said, Casey was WVa.’s kick-off guy until this year, and he did close pretty strong after a modest FG-Kicking start to last year. So, maybe there is mo’ in the bag here than his statistics connote? Tallish elongated K1 at 6′5″, so you need to mind the F.G.A./P.A.T.-block punch-point accordingly. Has had one FGA-swatted. Casey does enjoy 3o4 State Championship bling in the other football {sic: soccer}. And he was his team’s leading hoops scorer as a scholastic Jr. and Sr. alike. So, there has gotta be some athletics for a fake somewhere in the mix here. Enjoys ‘dancing’… whatever that encodes to mean…

Special Teams letter-grade:
This ain’t a bad ST’s unit, and it ain’t an average ST’s unit neither. The only quibble would be which B to assign? Prolly at least a flat-B although a B+ is in play.

Number of eers who could be heard  @Tech=9

the takeaway:
“Once mo’ unto the breach dear friends.” 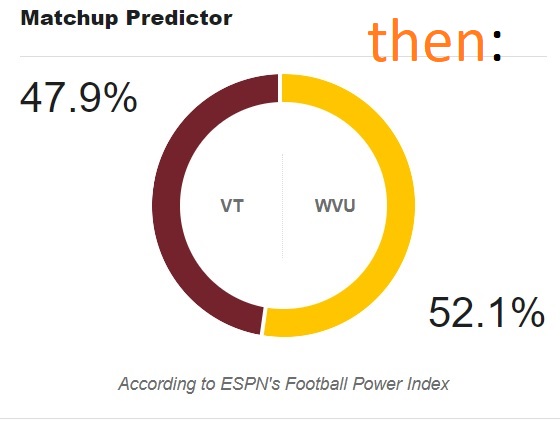 As Vah.Tech is soldiering up @Mo.town Wva., for the first time since grandmaw last got laid.

And at least we forget the classical days… when all the important Big Easters O&M champions were at the meatballs and w.v.u. was at the dip… we did sorta, kinda, semi… or at least on occasion, get along, at least a little bit. Sorta…

Then after a less than congenial and mo’ parts, hidden-cam found break up… it all went to a sudden hell in a conferencing-call gone speed-dial hand-basket.

And yet here we hard fallen-out-friends round #11 goes again…
“DING!”

xxx‘s & ooo‘s:
Nestor=big time oo7 Duquesne spy-ring edge here. Make no misQ about that… who else on their squad can give an insider scouting report (in particular with re: to Vice Squad mechanics/tendencies) like he can?!?
(or even a… playbook)? 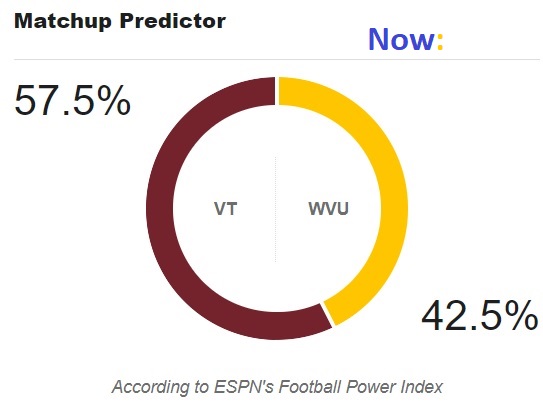 The home team as home is where w.v.u.’s points typically were, what with tallying a 182-65 scoring marker while going 5-o at home last season.

#ChallangeA.c.c.epted… there are 1,440 minutes in a day and don’t die of shock if it takes extra innings or 65-7o minutes to notch a VicTory upstate.

Buy a WV.Tech football blue-n-gold shirt and really muck with the hosts targeting software!
Wear O&M or travel in a Va. tagged car and don’t cry fo’ me… Argentina.

3-game splits, H/A… this is the Hokies first game @Away, (Check back next time).

Our handy dandy friend, the so-called: Forum Guide of Graham Houston fame is merely calling for an October round-robin reask.

This one is gonna be Smith Barney football and someone is gonna win this one… “…the old-fashioned way.”

And yet as inimical as this may read… the queer part, this may just be our best (match-up) chance to win one of the final-3 contests right here. And don’t forgets… you charge a gun and run from a knife.

Charge the musket, Justin!
Do NOT emotionally reel them in here young man— all fingers point to that. 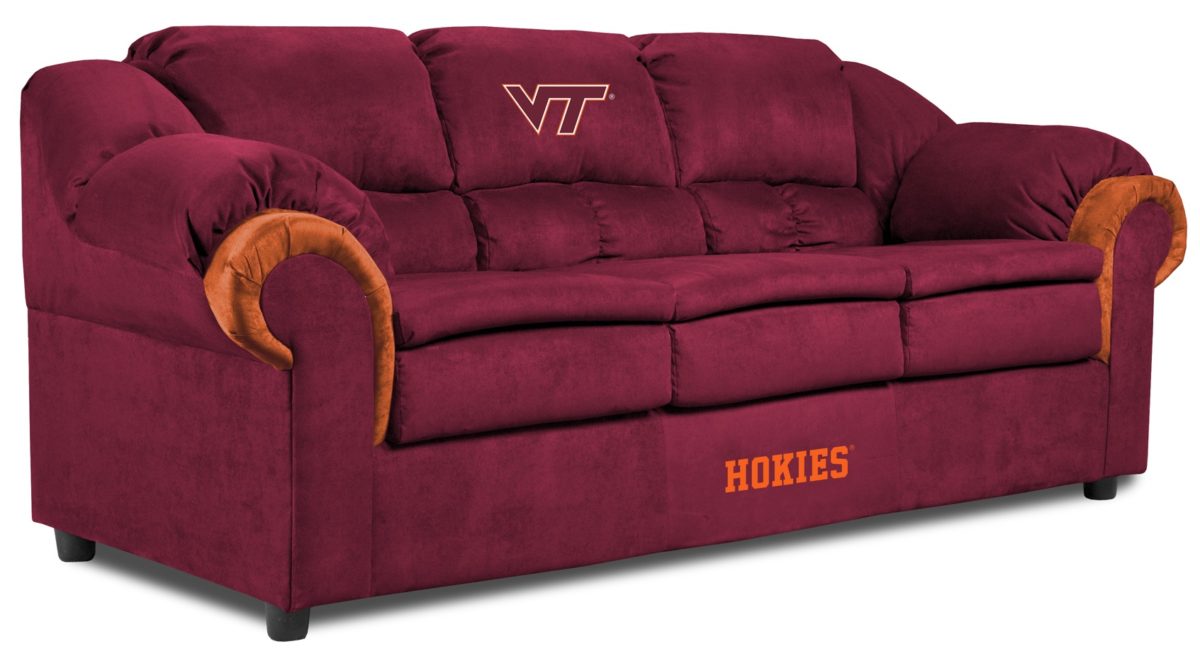 “Will you protect this, couch?”

…here’s the real deal in the truest sense

“The old gray mare, she ain’t what she used to be,”
—Coach (composer) Stephen Foster

As the halcyon or national championship competees’ of Frank Beamer and Don Nehlen is long gone and halcyon has been replaced by helium.

Or a lotta hot-air and wait-till-next-year football.

This means that both teams now lack {sic: super} star power. There ain’t no MV1 and there ain’t no Major Harris to go on and whoop the other side respectively.

This brings each winning outcome into play as neither squad is no longer great enough to go out and flat out and club the other to death. Each team is now hunt-n-peck or aquarian football as greatness goes…

…this means one of two things… someone screws up a determining play or two; or someone wins this one at or near the buzzer by one-full-play in a game that is more parts equilibrium and less parts shortage or demand.

Accordingly, Fu’ has got to hang around, slowly tighten the noose-knot and try to win a shady game of hangman. He must body-snatch, gut-punch, work the beltline and win his proverbial 3-hour-stomach-ache of a Futball game, late. HardFuglyTough.

Because -and mark my words here folks- IF Fu’ can somehow open up 4-o and pull the O&M fat outta the old-blue and gold fire?

The Mountain State or 3o4 bugbear being… how the hell do you pick the upset, this side of our A-game punch landing on their temple accompanied by very clean Hokie-Pokey football being played when you are looking up from a near –150 yards/game ∑ or Total Yardage deficit?

This while having to war @one of the toughest ever collegiate places to play which just so happens to hate our damn guts?!?

And in a game that the averages say will see a combined 20-TFL and 9-Qb’s-sacked? That’s code for both clubs chasing the chain gang and that favors the better passing Qb1 with the better individual Rb1 behind him.

That total yardage edge to me is Gen.Montogomery football or… A (New River) Bridge Too Far. 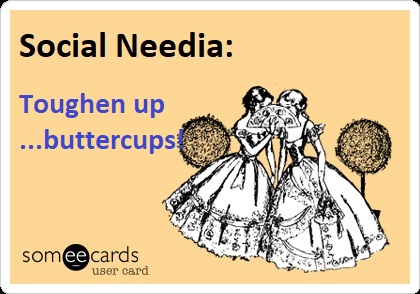 As methinks, this one is even-steven knotted at about 20 or so before a couple of having to press plays sees things go sideways. Thereby making for a cheap-looking 4Q 0:00 remaining tally in a game that was much more expensive than the final margin will indicate.

So, and ain’t nobody dislikes typing this any mo’ than me…

…and yah yah; Eye can hear you crying already…
though what if WVa. really does…
“stick it in” our …eer❓