The Hokies face the Seminoles of Florida State who check in at a rather useful looking 23 up and 6 down overall and a likewise mutual -or tied for 4th place with VeeTee- inside the A.c.c. with equal 11-5 intra-league marks. So this Atlantic Coast Combat game is likely the de facto tie break between having to play on Wednesday or getting the full double-bye until Thursday for both teams. As the 4 seed is code for less wear-n-tear for the whispered to be close to (attempting) to return “5” or J.Rob’ of hurrying Hokies fame. Because three A.c.c. Tournament games in three days is a lot and yet four A.c.c. Tournament games in four days is a damn load. As in overload for most A.c.c. no.5 seeded team’s most years. Although and nevertheless, someone has gotta break this fourth place tie come ~10 pm Tuesday night and you wanna know who. Read on, to find… out!

Daddy Leo’ is married to Claudette Hamilton. Claudette is a volunteer tutor, and they have two children: Lenny, 23, a musician; and daughter Allison, 8.

Senior, 6′4″, 210 lb., Vegas native and Sheridan College transfer 2-Guard PJ Savoy has a history of dings-n-dents that make you wonder what he would have been if he had only been 100% good-to-go. As his (right knee) has limited him to 6.4 ppg and 1.5 rpg in relief.  Savoy is a long-range specialist who provides air cover for the troops down low. As he is ranked eighth in school history with a .388 mark from the bonusphere. This year however Savoy has taken 159 shot attempts, 132 of which from 20′9″ or beyond— as this guy is a court spreader through and through (on 31.1% long).

6′8″, 230 lb., final year r-Sr., Forward Phil Cofer -who was surprisingly/mercifully granted a medical hardship waiver by the NCAA on May 25, 2018 giving him a fifth season to play and lead the Seminoles last year as a now fifth-year redshirt senior during the 2018-19 season- P.C. did drop you a steadying 12.7 ppg (now down to 7 ppg) and was actually second in rebounding last season at 5.9 caroms per contest (now down to 3.7 rpg). 34% from beyond the arc is serviceable for a home position Four —this from a kid with an offensive rebounding tag (over 100 in his career) who finishes hard at the rim. His mum (Reba) ran ball at Tennessee for the national champion Lady Vols and his old man (Michael) only played football at Tennessee and then Pops only played 10 seasons in the N.F.L., all with the DET.Lions and was named to the Pro Bowl in 1988. Dang… so yah; the Cofer Genome Athletics Project is most willing here indeed. That and Phil’ (who has a history of ankle surgeries (Godspeed) also has his very own giving back philanthropic video; impressive; may St.Philip bless and intercede as this kid has paid his dues to keep on playing this game.

Trent Forrest is a 6′4″, 210 lb. third-year Wing or off-G who you want to go buy beer for you. As this guy is Robert Parrish syndrome all over again and looks the 30-something part. Already. In addition to that, and in addition to being a part-time starter, Forrest is chipping in with a third-best 9.1 ppg, 4.7 rpg and a team pacing 3.8 apg. Or an all-’round roundball glue-guy if there ever was one. Forrest is also rather quietly just about to crack the Top-10 at F.s.u. in all time swipes (∑=153) and he will give you a five-finger discount and pick a pocket or three if you are not handy enough on the dribble. Trent has a rep’ for clutch play— just ask his ante in the NC2A’s last spring. This from the 45h ranked baller in the nation per ESPN who finishes strong at the rim, has good size and strength for a combo-G and who has an on-floor player-coach vibe to him. Who also won a slew of high school.edu academic awards all while being an outburst scorer down in Georgia. (don’t read that hand-n-hand very often; do yah?) Additionally, Trent has also pocketed several 6th-man-of-the-Year awards from several hoops services in his first two years down in Tally. (UPDATE: whispers say: “PROBABLE” with a toe hurt, here; St.Sebastian bless) 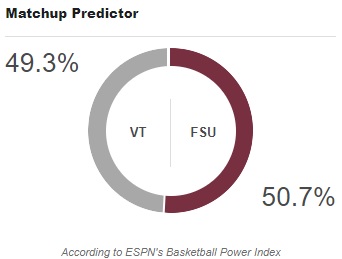 Because: when I first studied F.s.u. last week?

Eye saw a good hardwood team, nonetheless, I had no idea how good and how well this team represents the following mathematical expression…

Tru’ dat boy, and F.S.U. is actually something aking to being an uppercase or tall-ball version of our very own Buzzketball right now.

Our handy-dandy friend the so-called Forum Guide of Graham Houston fame is calling for a very erratic swing-vote looking 1 point ‘Nole VomiT on Tuesday night or the narrowest of F.s.u. wins. This due to extremely erratic and outlying data points… as V.Tech would smash a team that F.s.u. played-close, and then F.s.u. would turn right around and pump a team that V.Tech just played close. i.e. massive canceling effect in play here gentlemen. So I took this section a step further… -I know, “right?” Imagine me doing that…- So I took the Forum Guide a step further and ran the numbers (only) sans J.Rob, and his lame foot with a “5”-finger-discount (insert Peter Warrick satire attempt(s) (_____) here, check!) and that Forum Guide sans J.Rob’ predicts a 6 point F.s.u. triumph. (which makes a bit more sense, at least to me)

The Fighting Gobblers are up +2% at the charity stripe for the year.

So, two things really stood out to me in opining this preview… first of all, Eye kept trying to figure out how F.s.u. was this dang good? (as they do want for a marquee or truly seminal game changer(s) in individual terms).

Well, this is coaching the verb folks, or working the verb if you will. As the up-n-down Coach Leo.Ham’ is having more than a B.L.T. or club sammwich for A.c.c. lunch this year. And in point of fact, he’s prolly a darkhorse candidate for A.c.c. Coach of the Year this campaign. As he sure has these 2019 individuals playing HIS version of team ball like total mothers. (props on that one good Sir).

Secondly, I’m real glad it occurred to me to go back and run the Forum Guide (again); less our Qb or “five” or J.Rob’ rocking the Pt.Guard or One spot for Buzzketball.

And although I do not consider F.s.u. beyond our depth, they are a Mohs Hardness Scale squad …or one tough nut to crack out on the road. As they are playing better on D of late, they have been better on the glass for the duration; they are surely the healthier team here.

Is there a (whole) lot on the line for each Atlantic Coast Club here?
“Yes.”

Is this the A.c.c. where anything and everything can and (sometimes) does happen?
“Yes.”

However, even for the rather intriguing +4 on R&R -fresh shooting legs- Hokies sallying forth from the warm and friendly confines of our very own Cassell…

This roadie, in particular, is no small ask men.
As we’d better shoot lights out to have a shot in this one here.

Because the Seminoles fight, contest, and deny anything/everything. Physically. Very. Extra sauce lives here. As F.su. industrializes an amazing defensively strapping/contesting alacrity upon breaking-tape. And actually reminds one of the apex Pat Riley NY.Knickerbockers defensive heyday contesters mind you. And that makes stealing one here quite the contest indeed. As this is a credible Penn.State caliber club, fo’, real.

And in equational form, it should look something like this…

g.Patton vs. b.Montgomery if you will…
and that prolly will prove to be…

A Bridge Too Far.