Virginia Tech men’s basketball returns to the court on a quick looking Association ~48-hour turn after dispatching and chompping down on overmatched Coppin State on Saturday night over in a crispy-air flavored New River Valley.

The Hokies now host the 1 up and 6 down Longwood Lancers just hours after the 2020 A.D. Winter Solstice itself. And just days before Christmas breaking and Holidaying and Grinching and mistletoes and eggnog and Chris Kringling. As this is our final O.O.C. (out of conference) contest before 8-days off and then into Atlantic Coast Conflicting for the duration. Nonetheless, you wanna know who is gonna win here and by how much, right? So, read on to find… out!

Longwood Head Coach: And Lawyer: Scott Griffith “Griff” Aldrich: Age=45, 30–36 (.455) overall, and @Longwood. Has a rep’ for being trifecta nutty. As this team has the greenlight to gasthaus 3’s from nearly anywhere beyond halfcourt.
$150,000.oo

Baller Aldrich played at Hampden–Sydney under Tony Shaver, where he was team captain his senior year and a part of two NC2A Tournament qualifying squads for the Tigers. Aldrich also was a member of the Chi Phi fraternity and was elected to the Phi Beta Kappa and Omicron Delta Kappa honors societies.

After graduation from the University of Virginia School of Law, Aldrich returned to Hampden–Sydney for the 1999–2000 season as an assistant coach, where he assisted in the Tigers’ perfect 24-0 regular season, and No. 1 national ranking overall in Division III.

Aldrich then entered the private sector for 16 years, while also coaching AAU basketball on the side in the greater Houston, Texas area. Among the players Aldrich coached in AAU include DeAndre Jordan and Orie Lemon. He returned to college coaching in 2016, joining Hampden Sydney classmate Ryan Odom’s staff at UMBC as the director of basketball operations, and Director of Recruiting/Program Development. Aldrich was part of the Retrievers’ historic upset over top-ranked Virginia in the 2018 NCAA Division I Men’s Basketball Tournament.

On March 22, 2018, Aldrich was named the ninth head coach in Longwood University program history, replacing Jayson Gee. In his first season, he led the Lancers to their first-ever Division I postseason appearance in the 2019 College Basketball Invitational and was named a finalist for the Joe B. Hall Award (given for most outstanding first-year head basketball coach), which had been won by Odom in 2017. His second season saw Longwood reach fourth place in the Big South Conference, their highest finish in the league since joining in 2012.

Lawdog/scrivener Aldrich was a partner at Vinson & Elkins law firm, and also was the founder of an oil and gas company in Texas, as well as a managing director and chief financial officer at a private investment firm. Yah; Bartleby and me say that counts!

Daddy Aldrich is married to Julie Aldrich. They have three adopted children.
Aldrich is a devout Christian. (may St.Julia bless, thrice!!!)

Longwood at a glance: 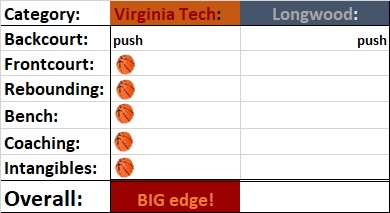 Helsinki, Finland’s very own: Jesper Granlund, a 6′6″, 210 lb., freshmanic year imported “3”. Jesper is said to be a a high-scoring wing with a strong basketball IQ…a versatile talent who can shoot, drive and pass. He has multi-year International experience on the Finlandize National Team. Where he nearly averaged a stalwart looking 27 ppg with offensive-outbursts as high as 55-points! Making his contemporary 4.9 ppg married to 4.1 rpg on a divorcing 23% from deep and 54% from the charity stripe and only 33% from the floor a bit disappointing this far. This kid is an interesting get for Longwood; once Mr. Jesper finds his shooting touch.

Cornhusking 6′7″, 210 lb., r-Fr., S/G Nate Lliteras is a Nebraskan. He is a long “two” by any standards. He is splashing you 5.3 ppg off the pine and leads the way with a salty 47% from 3-point-land. He is also whispered to be a slasher from the wing when he wants it and his family has back-to-back generational college basketball Genome Projections. Nate had good though not off the charts H.S. numbers; although every team needs a pure stoke it shooter from deep.

Final season, Ilija Stefanovic is from Novi Sad, Serbia; and then he transferred in from Eastern Florida. He is a 6′10″, 210 lb. string bean P/F. Who gets you 1.3 ppg and 1.2 rpg on 100% shooting (so far) substitute here as I.Stef’ does give you some pine-squad vertical size if not much else. All if which is way way down from 13.3 rpg as a Jr.College freshman at someplace named: Southeastern.

…last year was Longwood’s best Big-South year since 2010. That’s a good thing. As some might Brit-boxing say they could be a hardwood team: “…on the come”. 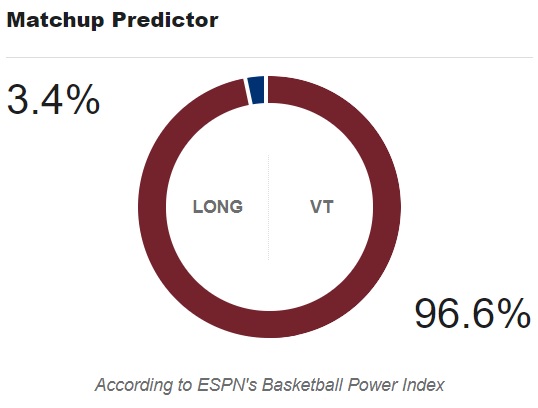 Departing as much as they just did however is seldom a good thing.

Although maybe Longwood is showing a pulse and moving the overall programming needle in the right direction?

Still yet, the Lancers were not picked to joust any higher than 8th in a Big South race of 10 in any of my preview mags. So, the needle may be ready to move backward for a year or so give/take.

And frankly, that is a curiosity to me… as they have been recruiting better than I ever expected in the last couple of seasons— to their cred’.

Our handy-dandy friend the so-called Forum Guide of Graham Houston fame is calling for a 30-point Tech Triumph in this one. (as both squads have balled vs. V.M.I. already, recall).

The annualized year-to-date vitals say that… VeeTee is only up +2% in shooting percentage margin (per the Hokies being better on D and Landers being better on O); nobody leads in 3-point percentage margin (as this is nearly at equilibrium with the Hokies better on O here and the Lancers better in defense of the “3”), and yet VeeTee is up +6 caroms in rebounding margin (tho’ Longwood was + on the glass in their downright) year-to-date.

V.Tech is up +3% at the FT-line for the year.
V.Tech is up +6 in R&R due to a Big South scheduling quirk in the last fortnight of ball.

Tough to the point of umpossible to say that homesteading A.c.c. is not a major favorite over mid-major (Big South) and 140-mile West-by-So.West visiting Longwood in this one.

As it seems asinine to say the Lancers are gonna go Helm’s Deep and rampart our Cassell in this Monday night contest.

As Longwood did play fellow A.c.c. Wake to within four-shots. They have been beaten by one-shot, twice; and by 1-point, once.

So, these Lancers may just be longer than you think…