The Hokies must now battle 7 up and only 1 down Louisville (1st-place, 2-nil in the A.c.c.); who is also o-1-1 on postponements and cancelations outright. And this is an unfamiliar Louisville who really just super shuffled their off-season (not)-all-hands-on… deck line-up card. As there is turnover, there is attrition and then there is Louisville basketball. That squarely said, L’ville did go talent shopping and did pretty well for themselves in all 2nd-hand candor here. And a couple of kicked-around guys seem to have developed pretty sharply too boot. Nonetheless, what you wanna know is… who is gonna win and by how much, right? So, read on to find, out!

Coach mid-Mack started his coaching career as junior varsity head coach at McAuley High School, an all-girls high school in Cincinnati, in 1993. In 1995, Mack was named head coach of the girls’ varsity basketball team at Mount Notre Dame High School in Reading, Ohio, where he received the 1996 Coach of the Year award from the Cincinnati Post.

Coach Mack then went back to Xavier and later to Wake Forest as an assistant coach. Then he landed the big-whistle job at his secondary alma matter of Xavier. Where he only went for this… Big East Coach of the Year (2018), Henry Iba Award (2016), Atlantic 10 Coach of the Year (2011) and the very interesting Skip Prosser Man of the Year Award (2011). Dang. Impress much? Coach Mack has never had an L’ing season as a big whistle at any level. His bottom year was 17 wins and he went to the big dance 90% of the time at Xavier. And although he curiously only holds one conference crown to his credit, coach (big) Mack also holds: 1 final-4, one Elite-8, and not less than 4 Sweet-sixteens behind that. Or in other words… this is (apparently) a big-time post-season pressure-cooker-coach. Then last March Coach Mack inked a very fiscally lucrative seven-year deal at basketball factory Louisville that flirts with nearly $30 XL before it’s all said and won.

Coach Mack is known for his physically brash style, man-to-man D, rebounding, and offensive freedom (i.e., he doesn’t call as many sideline plays); in his signature ½-court O.

The Mack daddy is married to the former Christi Hester, a Louisville native and former University of Dayton and Holy Cross guard (1996–2000). They have three children.

In 2017, Mack earned an honorary degree from Arizona State after
beating Arizona in the NCAA tournament.

Cardinals at a glance:

Returning Starters=zero! (not one, zip, zilch), they all graduated and/or, bailed! 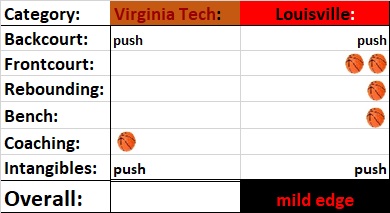 6′8″ and 23o lb., r-freshmenic or debut year Jae’Lyn Withers is a leaner looking than he is listed P/F by way of the Queen City of Charlotte, Nc. He is also said to be a high-riser who can and will dunk all over you off the dribble. The fact that Joe’Lyn won the team slam dunk competition at the preseason “Louisville Live,” a preseason outdoor event at Fourth Street Live in downtown Louisville might just speak to this. His pops (Curtis) was only all-conference U.S.A. in hoops down at Charlotte his ownself. Ditto his 1st-cousin: (Jaire Alexander) who played football for three seasons at Louisville (2015-17) and is currently a Cb for the Green Bay Packers, where he was a first-round draft pick in 2018. So, the N.b.a. D.n.a. could be at least a recessive gene here. Maybe mo’… as the relative athletics are in place. As 9.0 ppg and the team-lead at 6.9 rpg in relief are none too shabby on just 23 mpg. And the 57.1% from the floor tells you just how often this finisher keys the paint. Interesting 100th ranked national prospect by Rivals who could blossom if his shooting (25%) deepens a bit more in time.

Dre Davis C + Hogan Orbaugh C + Gabe Wiznitzer C = 2o′, 690 lbs. down low off the pine in the paint for L’ville. They also conspire to give you 11 ppg and almost 5 rpg. So, don’t let the collective production scare you, tho’ the size match-up foible is a pretty big deal.

Second season Quinn Slazinski is a 6′8″ and 215 lb., 3o4-homeboy by way of nearly gone full-fledged basketball factory Huntington Prep’. 6.4 ppg and 4.4 rpg on 83% FTA’s are not ½-bad this early on. Q’ does need a bit more range on his 3-ball (20%) and yet he played just 12-days after undergoing an appendectomy last year. St.Elmo’ bless! As this kid does not melt as a softie in a snowflake world. Slazinski also courts an AAAAA Texas championship bling from earlier on in his scholastic career where he had a label for 3-point-shooting and for collecting a few diamond or baseball offers along the way to boot. And seeing that he shot just below 50% from range last year he’s prolly due to snap outta his opening 2021 shooting slump soon enough as an infrequently seen hybrid-F who may just grow into a bigger body if the weight-room is wiling.

Back-up Off-G, 6′4″ and 205 lb., second-year Josh Nickelberry (3 ppg, with 30% long; old right-ankle-sprain (may St.Philip help)) and caddying 6′10″ and 245 lb. P/F and Ireland imported Aidan Igiehon (2.6 ppg 1.6 rpg, 37% FTA’s) with a bum-shoulder (St.Christopher bless) are both back. And both get you some buffer/filler type minutes. Josh (No.83 via ESPN) has the look of the Card’s new defensive-stopper (despite being only the: the second-leading all-time scorer in the history of North Carolina high school basketball!) And the Irishman plays well, ’cause he’s big and strong. Seriously, this has to be the most cut-up Frontcourt baller in all of Ireland. As his moniker of: “the Irish Hulk” is well spent. Last name is pronounced ee-GYAY-hawn. 50th ranked baller from ESPN and Igiehon had a sharp New York state high school rebounding and defending career. With anchoring 3-straight-State titles to show fo’ it to boot. Not too shabby for a kid who did not start hoops until age 12; and who fought his way up to nearly 25 ppg as a scholastic senior. 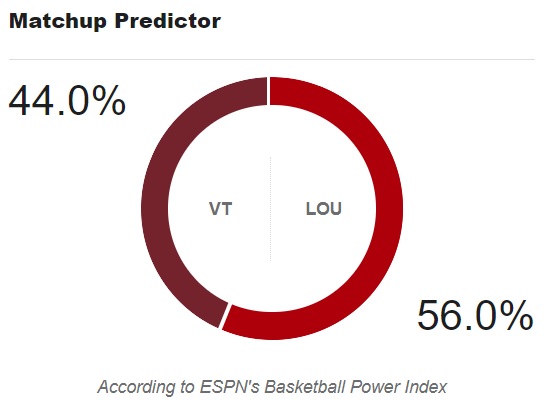 The takeaway here is… most percentage-based probabilities have L’ville likely to win by somewhere in the vicinity of 6o-4o% or six times in 10.

They could indeed be probably right.

Most previews have Louisville pegged to win by between 3-and-1o points.

They too could indeed be probably right.

Because as we all know -per Will Stew’- the A.c.c. visitor wins right at 3 in 10 times as the guest out on the in-conference road.

A.c.c. on A.c.c. crime very much favors the homesteading team in historic terms; and that team’s Wednesday night name is the Louisville Cardinals here.

Our handy-dandy friend the so-called Forum Guide of Graham Houston fame is calling for an ask-back after we catch a little mo’ same-on-same round-robin in common opponent(s). (although, L’villes opening A.c.c. work is not south of our own, on n=2 or a limited population basis).

The most recent 5-game metrics say that… the Cards are now only up +1% in shooting percentage margin (L’ville has cooled a bit on O recently); yet again, nobody is really up anything% in 3-point percentage margin (tho’ the margin has mellowed to 2% better VT O and 2% better L’ville D), with nobody up much of anything on Windex Work in rebounding margin (L’ville is not as clean on the glass whereas VT was about the same in miss-collection in the last couple of weeks).

The Hokies are not exactly expected to win here.
And frankly, I’d have to R.A.T.T. expect our chances to win would indeed be better @home.

…and this just in, rain is rumored to be, wet.

This and the really BIG jumbo-2-Te sized oLine-up of Louisville is a real live match-up foible or worse, probably, very.

Still yet, this is why you play the game… and to be sure -although Louisville is prolly the rightful home favorite- they are not such a favorite as to be credibly beyond our depth.