Today’s word of the day is…  pol·i·tricks

Baller Satterfield played Qb1 for Orange High School, located in Hillsborough, North Carolina, from 1989 to 1991. He attended Appalachian State from 1991 to 1996 and started 27 games at Qb from 1992–95 under Coach Jerry Moore. As a senior in 1995, Satterfield led the Mountaineers to an undefeated regular season and the quarter-final of the NCAA Division I-AA playoffs, where they got beat by Stephen F. Austin State University. Qb1 Satterfield earned first-team all-conference honors as a senior.

Student Satterfield graduated from Appalachian State in 1996 with a degree in physical education.

Coach Satterfield joined the Appalachian staff as receivers’ coach in 1998 before mentoring running backs (1999–2002) and quarterbacks (2002–2008), serving an important role in the university’s transition from power-I to the spread-formation offense. He was the primary signal-caller from 2004 to 2009, directing a team that consistently ranked in the top ten in five different NCAA I-AA categories: scoring, rushing, passing, passing efficiency, and total offense. Satterfield spent one year at the University of Toledo as quarterbacks’ coach and passing game coordinator and a two-year stint at Florida International University as offensive coordinator before returning to his alma mater in a similar role in 2012. After head coach Jerry Moore was not retained following the 2012 season, Satterfield was promoted to head coach.

Poppa-bear Satterfield, a native of Hillsborough, Nc. He married the former Beth Burleson,
a star runner on the Appalachian State track team in the mid-90’s.

They have a daughter, Alli, and two sons, Bryce and Isaac. 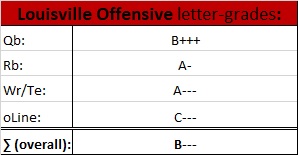 Louisville is 83rd in Net Punting, and so is Louisville Punter: L.Lupo! (although his name is ‘Logan’ it lists on several stat sites as: L.Lupo! And “si”, this Logan’s Run seems to wanna fall right in stride here. As L.Lupo fits a truly blaze-orange on fire ginger hairstyle, that looks like it got hit over the head with Alice the maid’s, mop. Seriously, this is an edgy looking dood, period. Never mind being a Punter. L.Lupo goes 6′, 195 sophomoric lbs. Edgy looking lbs at that! Did Eye mention the edgy look as a Punter, yet? Well and either final day of October way… El Lupo was only the No. 9 ranked kicker in the country by Kornblue Kicking… and he was only the 1st-team Miami Herald All-State selection as a senior (from football factory: St. Thomas Aquinas H.S.). L.Lupo is so edgy in fact, that his bio’ only lists one, that’s (1) sentence! No parents/family, no hobbies, no nothing. Literally. And maybe this edging was necessary, as he arrived with a “totally” Valley look as a rookie last year. I mean “like” Nicolas Cage (as: Randy) had nothing for this Valley look. So maybe the edgy look is his thang? So was finding 30-odd-lbs. of muscle since he got to bluegrass and bourbon country. And maybe you need an edge —when you’ve dropped a punt-snap and had another punt snuffed-out? Still yet, this is one of the rarefied Punter’s that I’d rather not fight. And he is said to have a Sunday range of an easy 50+ off-the-ground when he FG-kicks. And all satire aside… God Bless Logan. As something just does not add-up well, here.

(and just as I get all of ^that^ hammered out and oh so well struck… L’ville switches Punters to Ryan Harwell!) Ry’ is a rookie year voter or nugget Punter from Texas. Seems bigger than his listed 6′1″, 19o lbs. on tape too. Ryan is by way of JuCo transfer and yet still has four that’s (4) D-1 years to kick-it? An all things 2020 concession by the KayCee NC2A suits perhaps…

…either way… Ryan came over from Tyler Junior College. Where he averaged 41.1 yards a punt during the 2019 season and was sharply named NJCAA All-American and first-team All-Conference performer. That does not suck! And neither does his long of 61-yards already. Ditto the fact that Harwell beat out 40 other invited walk-ons for this roster spot. Although Eye am not privy to what— clearly L’ville musta saw something they liked here.

5′12″, 196 lb. second-year K James Turner is 75% this year thus far. The thingy is, he is perfect out to 40-yards and 100% imperfect beyond that. He has also only made 2-kicks in the last 4-games or going 50% since the end of September. Such almost leaves a taste of the Peter Principle in your mouf’ if you will. That said, JayTee did not miss in his final 1.6 years of high school ball; that does not suck. He was 1st-string all-state Michigan. That does not suck. And he has only missed one P.A.T. in the least 3+ kicking years of his game of life. That too does not suck. The whispers say James has about 55-yard FGA useful range. And that’s not ½ bad as preferred non-schollie walk-on K’ers go. And -same as L.Lupo up above- Turner can kicking double-dip as your utility P if need be. (BTW: Turner beat-out not one, he beat out two former starting K1’s for this spot this summer).

Special Teams letter-grade: the legwork guys don’t seem to be leg-day bad. The rest is mixed or less than that and that’s a Snake River Cannon’s drogue parachute to the Cardinal’s
special-teams letter grade. i.e. dragging it, down to a C—.

Number of Cards who could shuffle @Tech=11

As he high-pointed the arc and the hoops-school image of Louisville football. As the Cardinals won eight games in a season when few projected them to win half that many. Coach Satterfield flushed the sour paranoia from the Louisville Sanitarium. Thereby drawing praise from fans, media, and opposing coaches alike, who voted him A.c.c. 2019 Coach of the Year! 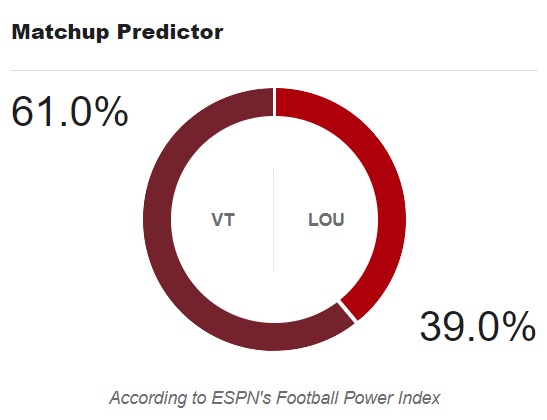 That’s pretty dang good for a guy who was supposed to be rebuilding or getting a rookie year mulligan to borrow on last week’s word of the week, thrice.

This year however and a bit more is/was 16-returning starters expected and frankly the Cards have gone a bit 52-card pick-up shirts vs. skins sans the S.P.F. on a baking summer day.

So go fig’ on which L’ville is the real L’ville football club, here?

Tho/ do figure that Louisville is another recruiting class or three away from truly gaining Top-44 depth-chart baller traction.

As the starters really ain’t ½-bad.
Though there are a lotta quarter horses and trotters behind that in the derby here.

formulae here favors… who knows?
Eye am fenced, a push, even… a split-decision, draw.

Our handy-dandy friend the so-called Forum Guide of Graham Houston fame says… the round-robins have all flown away here. (as there is not yet anything in-A.c.c. common between these two squads).

#ChallangeA.c.c.epted… there are 1,440 minutes in a day and VeeTee prolly needs to win a good 50-55 here as this one could go right down to the proverbial horsing around: ‘wire’.

the optics…
…the optics say that this one is all about the O&M, ones.

As you are about to read immediately below, there are strong (favorable) TTT metrics that do lean the O&M way. This Eye do like.

There are however greater ‘twitch” and ‘burst’ X-factor kids who co’ed and co’op and distill the Louisville offensive huddle way more so than any of the other three huddles out on the brown-water background home-field on Saturday 383 miles nor-by-nor-west.

Though L’ville is a bit 3rd down better on O, and so are we on D. So, the Lo.FM Oct.31st g.story is likely to be 3rd-down written here. Well, unless it is not. As there are those who’d coach max’ on cracking the weakness on weakness 1st-down code. Which to me seems to favor the ciphers at L’ville. Presuming they are penultimate down forcing VeeTee to throw. EDGE=push.

TTT Analysis:
Clearly, VeeTee should be playing behind the Louisville LOS (line of scrimmage) in their run-fits here. Ditto playing in the L’ville Qb1’s lap when the Cardinal drop back to take, flight. The Vice Squad holds a reasonable advantage on the other side of the LOS. Accordingly, this is one of our few really exploitable ✔-marks folks. And we really do need to check in here and force L’ville to a probing check-up A.S.A.P. EDGE=VT!

The most recent 3-game trends did reveal a couple of things… namely, both run-D’s have softened by –44 ypg nearly precisely apiece. Making both halt-units much mo’ inviting on the ground; and they were both basically hosting an open-wedding with an open bar as is before.

Nevertheless, it is Louisville that has seen their offensive run-fits improve by nearly ➕30 ypg whereas the Fu’fensive ground-gang has been less offensive of late carrying the mail by about –20 ypg… or in other words, you do the maths.

Then (unfortunately) we come to the Home/Away rushing splits… where Louisville improves by a composite ➕40 ypg… as O&M eggs and j.Ham enters nearly Denny’s all-you-can-eat mode with the Techmen’s run-fits worsening by a compound virtual –85 ypg on the road!

Again… you do the maths!

Others are telling you that Fu’ has only been beaten once, back-to-back @Tech!

…so, recall last week on the TSL.com pay side… whereby someone who looks a lot like me asked for help. Help in why Wake might win ¦ and help just the same regarding why VeeTee might win.

(as I never found my peg upon which to hang my sturdy-looking OPT digits— and right on cue… look what happened!)

This week Eye have… the thing is… I’m not entirely convinced which VeeTee will show up? Tho’ I’ma pretty sure that if the @Wake VeeTee shows up… not only will VeeTee be haunted on        📡Saturday night… VeeTee may be in for a downright scary, year!

Louisville is pulling out all the stops for this one and you’d have to expect them to be high like the International Space Station come 4 PM to Astronomical Twilight give/take (~7:57 PM!!!)        🔭

This on a very rarefied Θktoberfëst double-dip full moon. With an, every 19-years Oct.31st trick-or-treat freakin’ Blue Moon set to bust out before kickoff itself.

Now what the hell any of that has to do with anything at all Eye do not know?

Eye do however know that IF/when VeeTee decides to show-up and show-out and physically show-off? I do like our chances to ever so slowly muscle a less physical tho’ gamey Louisville outta the game itself.

The politricks caveat of course being… which VeeTee will bother to show, up?

As in, the exit-polls will kinda forget the overall game itself; as someone pops a trick-play or some kinda fluke play Dew(ey), Electorial College style; late.

As our 2020 campaign’s epitaph is just about to be written here, folks.

Yes, on a full-moon Halloween, no mo’/no less!