Today’s word of the day is… leprechaun

Kelly then went to a pretty well kicked Central Michigan University football program where he only turned C.M.U. around in one year and got to a bowl game in year number three. After that, he was off to Cincy where he posted a seminal looking 36-6 mark including four bowls in four seasons and two New Year’s Day bowl invites with a perfect season in his final (12-o) year!

Coach Kelly then landed most any up-n-coming coaches dream job @South Bend. As the Irish big whistle coach Kelly has gone an entertaining and job-holding .611 overall for N.Dame. This includes a low-water mark or Irish Potato Famine of 4-8 in 2016 and nearly all the vacated wins from 2012-2013 (o-4 official mark; with 21 wins vacated) due to the use of ineligible players. This also included the Sugar Bowl season that climaxed in a dubbing by S.e.c. Alabama to boot.

Big Whistle Kelly is the winningest Notre Dame hire since Lou Holtz. In the 13 years between Holtz’s departure and Kelly’s arrival, the Irish averaged seven wins per year and finished 11th or better in the AP poll once. Even with 2016’s all-time weirdness, Kelly has averaged nine wins per year and has finished 11th or better four times. He’s got two top-5 finishes, as many as Notre Dame managed in the 1990s and 2000s combined.

Daddy Kelly has a wife, Paqui, and three children, Patrick, Grace, and Kenzel. Paqui, after surviving breast cancer, went on to start the Kelly Cares Foundation.
May St.Xenia of Rome bless! 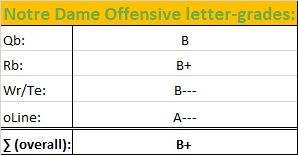 Notre Dame is 41st in Net Punting and so is rookie year Jay Bramblett. Jay is a 6′1″, 188 lb. Tuscaloosa escapee. As Jay was merely the no.2 ranked Punter in the nation (Scout). That’s all… and he was not ranked less than the #5 Punter in America by anyone. Making Jay a rarified legit Top-5 consensus punting specialist pick. And although Jay only tallied a career-long of 59-yards in-game in high school he also went for 178 of 260 passes completed; good for 2,341 passing yards and 18 TDs as a senior year Qb1. So, you have to know there are some Oct.31st tricks in the treet-bag here.

Jonathan Doerer is a 6′3″, 203 lb. junior year place-kicker and 92% touchback KO-specialist from Ric Flair country or Charlotte, Nc. So you know leg-strength is not lacking here, nor is accuracy at a nifty looking 86% thus far with no P.A.T. misses as well. Doerer only has one make at any level >44-yards (52 yards this season). So his accuracy does wain a bit beyond a mid-40’s spot. Jon’ was, however, the 6th ranked Kicker in scholastic terms (Scout) and a consensus Top-20 kicking prospect coming outta high school nationally. To take that a step(s) further… although N.Dame has not turned to Doerer all that often, he has only tallied one collegiate miss his entire kicking career (88%). Not half bad for a kid with a very leggy rep’ that seemed to want for guidance software coming into 2019.

p.s. a word to the coach Shibest wise… N.Dame has been onsides vulnerable under Kelly.

Special Teams letter-grade: N.Dame is ranked an impressive 26th in S&P+ Special Teams for 2019. Punting is good and Place-Kicking is even better. Only the return teams seem to
lack punch. Accordingly, I’ll go good for a steady looking B++ here.

The takeaway here is… Notre Dame mounted an impressive run in 2018, with the Fighting Irish posting an undefeated regular season for the second time in nine years under Kelly. Six of the 12 wins were by 10 or fewer points, with four of those victories coming at Notre Dame Stadium courtesy of six N.f.l. draftees who are now all gone.

Or in other words, “aye”; the Irish are a good squad who went Gestalt Theory off last year and uber theorized in close contests @home. This is a real live homecourt advantage men, one of the more severe ones Fu’ and Staff will see in +/- a handful of seasons.

And yet Notre Dame hasn’t put together three consecutive double-digit win seasons since 1991-93 under Lou Holtz. Meaning: this is a very good football squad that typically comes up 1 break or one baller short of being, great.

Forum Guide: sadly, our reflexive round-robin friend the Fourm Guide of Graham Houston fame is not open due to lack of common opponent(s) this week.

One of the overall trends I found here was… N.Dame has ever been nearly equalized in-game in total yards, or A+++ or F—. Not much of anything D letter-grade or B letter-grade lives here. A very strange trimodal subset of data points if you will. Like a camel with a hunchback, or three, humps. Making N.Dame really really good, really really poor or really really; average.

Overall: N.Dame outrushes V.Tech by a full yard per carry although total rushing was only separated by 12′ per game. On the aerial side, N.Dame out-passes V.Tech by about 20-yards per contest even if V.Tech out catches N.Dame by a half-yard per grab. On the other side of the ball, N.Dame is about ~40-yards per game thriftier on D in total. However, the Irish are less strict on the ground allowing 30 more yards per game whereas V.Tech allows a whopping ~70 more yards per contest through the airwaves.

In their last 3-contests… the Irish O is pretty close to the same; although running more and passing less of late. The Hokie O, however, is rushing nearly +40 yards per game better and is actually just slightly improved on passing. On the other side, N.Dame’s D is within 9′ of being the same overall even if their rush-D is now looking at least pretty user-friendly at 198 yards per game of rushing allowed. The Hokie Bud Lyte halt-unit has oh-so-quietly loosed up by nearly 99 more yards per game allowed of Total D. Per a modest tightening vs. the run and a nearly caving approach vs. the air. (–122 ypg aerially worse here if you are keeping score at home) 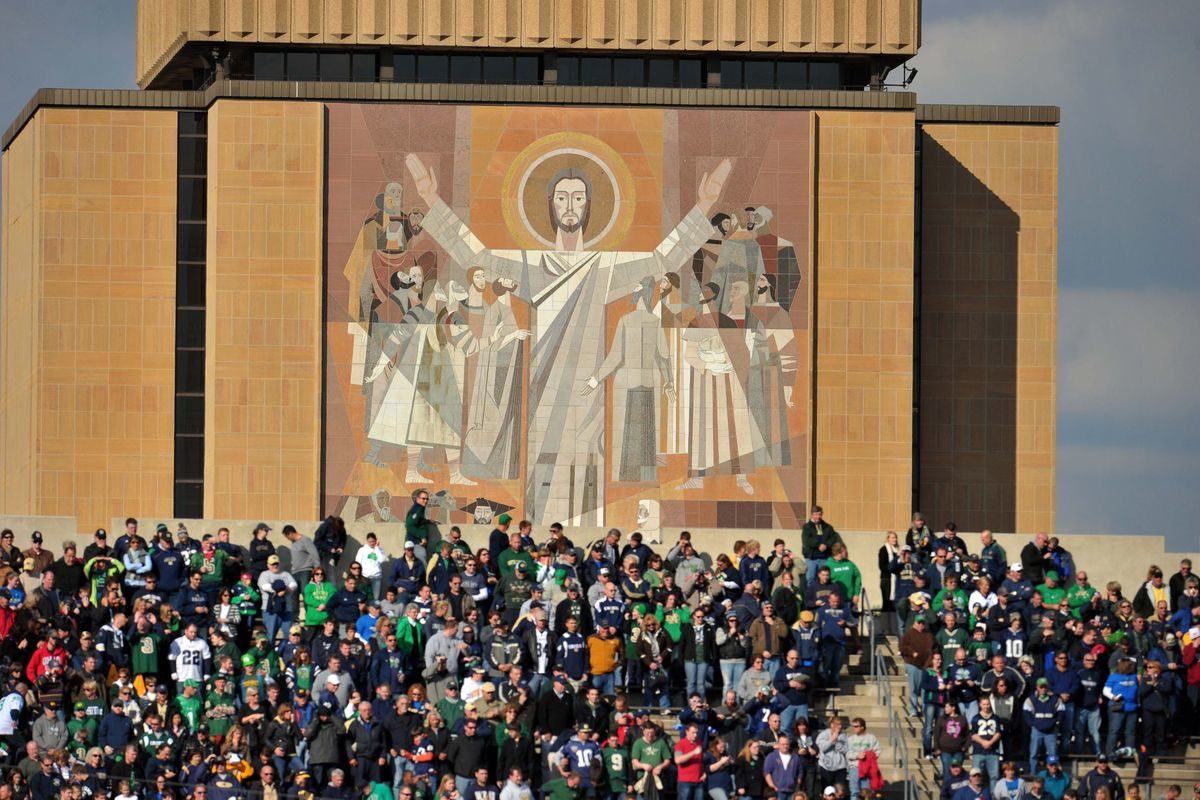 I did not like how this Lo.FM (Long-field Management©) contest shapes up vs. the F’n Irish halt-unit out on the road. Thingy is their possession-based 1st-down O plays outta a hole more often than not. Or in other words, whoever wets the bed the least when chasing the chain-gang will be at great advantage here. Who that will be you ask? Well, that… depends.

Because N.Dame is pretty sharp at disallowing opposing penetrating TFL and Qb-sacks on O. And even better at that in inflicting TFL and Qb-sacks. Generally, this affords them a sharp-looking TTT (Time To Throw©) advantage. And as we all know by now… when taken in tandem? These two in-game barometers are highly pressurized and therefore very tough to beat.

In quarter-bounce terms, N.Dame has won every quarter not named the 4th-Q by at least a 2:1 scoring ratio to the good. The 9th inning or the 4Q you ask?

N.Dame has won by, one that’s (1) point. This does not suggest conditioning or mental toughness when you generally have a noticeable or massive recruiting/talent edge in your favor.

Or in other words, Fu’ and Co. just need to hang around and maintain contact in this one. Let pressure burst Irish pipes and try to steal this one vs. a possibly wilting or fading N.Dame, late. As guess whose Q-score is ranked 20th best in oLine power-rate this season? (compared that to the Irish dLine’s power-rate above at thy leisure).

Nevertheless, do caveat bear in mind… that in our recent mini-me baby-bull 3-zip market? We have faced one overmatched D-1aa team we beat by 2:1 or 34:17. We also beat a very talented coastal team by holding on late and then we barely nicked a reborn U.n.c. team in the 6th OT at home.

And the one thing those two teams that are pretty good had in common you ask? They both allowed a metric ton of sacks and TFL (tackles for a loss) when on O. Whereas N.Dame is 38th and 34th allowed respectively… you do the maths.

Although I am also wondering if VeeTee is catching ND at just the right time as two emotional ships passing in the night? Is this a karst topography type of game for the applied-sports psych phrenologist in us all?

In closing… I do feel like our culture has grown or: “increased”. I am, however, still waiting on more objectivity regarding if it has actually: “improved” (post Qb1 swapping I mean). Acceptance and therefore commitment towards this new Qb1(s) has indeed escalated. And so has team-wide efforting, as no doubt this is an encouraging thing…

Mutually, the composite opposing talent matrix will now also escalate. An escalating talent matrix that we must now visit and face as nearly 18-point road underdogs 549-miles west-nor-west over in South Bend. Are we now cleansed cultural lepers or was U.n.c. a clinical con?

Because when I look back, I’m semi split between: …Easter-eggs or cheat-codes?