Today’s word of the day is… funambulist! 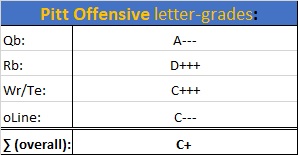 Pittsburgh is 25th in Net Punting and so is Kirk Christodoulou. Up from 121st in Net Punting so last time we checked. Kirk is yet another (young) Man Down Under. Or imported Aussie punter the same as our own, (per Melbourne, Australia). Kirk goes 6′1″, 215 r-Jr. season lbs. Down in ‘bloody’-‘roo-land, “keptin” Kirk was a standout Australian rules football player before embarking on his goal to play college football in America. Kirk worked with the renowned Prokick Australia program that has produced many successful collegiate and N.f.l. punters alike. Kirk has a pretty dang healthy leg when he gets it into the pigskin bladder, 36 career punts this season >50 yards and six >65 for his bigfoot career says so. Kirk can and has changed field-position all by his ownself before. Kick also has faked one on the ground last year —that went for negative-seven nowhere. He additionally has a higher off the turf than normal toe-to-leather impact point. Go’on and aim high(er) if you wanna be a blocker, here. This is a very good very leg-game-willing Punter, who will only get better and he prolly does have a Pro’ strength leg: be that N.f.l., C.f.l. or Aussie Rules Football southern hemisphere ‘down-under’. He just needs some punt-coverage love; as he’s individually improved quite a bit off of a pretty impoverished 2018. (and this is an A or B-Gap wider punt-protect formation Eye’d enjoy challenging on speed-rush-max’).

Alex Kessman is Pitt’s K1 and he’s not a dull one to watch. As a lotta ‘tude gets copped by this Kicker here. 6′3″, 19o lb. r-Sr. year; and last year Special-K set a school record with four field goals of 50-plus yards during the 2018 season and he also owns Pitt’s all-time mark with six in excess of fiddy for his career! So, leg strength this bionic Lee Majors kicker gots in spite of his spindly looking string-bean frame. Which he will “FLEX” on you after any real distance-accord type make. Alex is a 2 outta 3 maker this year, same as last year; although understand that he is also 8 outta 11 from ≥42-yards as Pitt gives him a long-range FG-attempt looksee whereas others will short-punt and just play D. Alex has not less than 60 FGA makes for his four-year starting K1 career, so the experience-curve is not wanting either. Admittedly, his make% is not gaudy, tho’ Kessman can tie or win a long-range ½ play game for you when everyone else has to revert to a likely “Fail Mary” heave-ho. Just a bit more midrange or 5-iron type game and this kid might go… Touring.

Special Teams letter-grade: Pitt is not bad… and their legwork guys are surely above average on leg-day lifts. Just a bit inconsistent at times, as they are right at the lowest possible
B— fence for all the little things being just off.

Number of Panthers who could prowl @Tech=10

Hate this for anyone/everyone… leave that tired ass blue/red shite at home… this hurts all things RW&You! 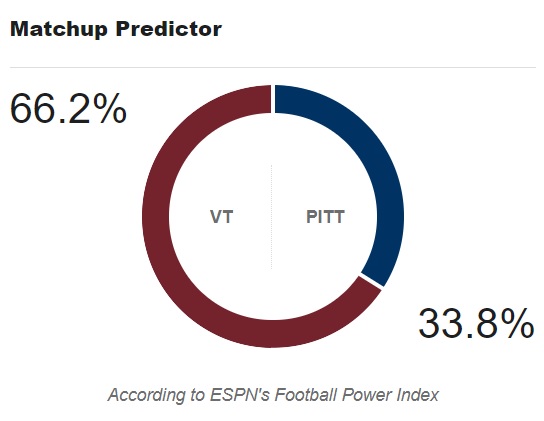 As one of the previews I read for this one, described this one as basically an old-school Extreme Championship Wrestling (“Eee-Cee-Dub!”) 3-way-match.

So, all the Plague Patron Saint’s (including St.Roch) bless and intercede.

Pitt has a preparatory film-study edge here… they themselves are not off the charts complex on either side of the LOS (line-of-scrimmage). Tho’ still yet, you’d have to think things favor Pitt upfront. With their (in theory) fully staffed dLine vs. our short-staffed oLine…. again; in theory.

(ask: the pregame broadcast right after 4 PM to get the final theoretical word). Then we see the classical Rest vs. Rust argument resolve itself.

Nonetheless… unless Haze’, Grimey, and Rambo all comeback (pardon the patterning pun); or unless Mitch’ and Trè “ole” these hard-charging Panther defenders?

’cause if this were a hoops game?
We’d all be typing: “Pitt has fresh-legs” here.

Tho’ yes… the easy cookie-cutter turnkey allegory fits here, Lions, Panthers, and Hokiebirds. And the Audubon Society side being the operative part. As it will take a lot to go’on and whoop Pitt on the ground with our oLine at ~80% strength.

Or in other words… formulae football prolly favors the better
passing game on Saturday up in the Ketchup Bowl.

(from either team Eye means).

#ChallangeA.c.c.epted… there are 1,440 minutes in a day and Virginia Tech needs to notch pretty close to 5 in 6 minutes of work just to be sure as road-warriors go in this one.

the optics…
…methinks one of the hidden obit’ things here will be… field-position.

As Eye just do not foresee a lotta long Smith Barney “old fashioned way” type of sustained drives from either side on a Steel-Gray November day.

That or just one Special-Teams hero or goat
is gonna make someone look really “baa-aaa-aaa-d” indeed.

Additionally, a tip of the cyber GRIT hat @Chris Coleman of TSL. For his sage use of the word: “accuracy“. As the O&M passing Optics of the edge pressy Pitt defense will not be any better than cracked-glass for us sans that.

the skinny…
…is a bit of a misnomer here. As Pitt’s D is a lotta things… and Jenny Craig or ‘skinny’ or Twiggy the 60’s imported British supermodel just ain’t among ’em.

As in… this is one of the more physical sets we will face all year.

Or, if we really are: “Hard” and “Tough” under Fu’?
Now would be a smart time to sack-up and prove it.

Lo.FM Analysis:
Well, this is a mixed one to the point of being downright hard to fig’?

How Pitt is this piss-poor on 1st-down defense is a bafflement to me? As nothing on tape really explained this. They were not too aggressive (and missing plays); no more so than they were too passive (and giving Black Friday plays away early). Eye do know, however, that everything here cumulatively begins to tilt in the Panther’s favor— if only on the get off the field 3rd-down match-up that favors Pitt. EDGE=Pitt (at least a little bit).

TTT analysis:
Not much to analyze here… other than the betting Total.
As this one sure looks like one where the game clock will turn.
And that to me hints at an Under on the total if there are less total plays on Saturday.

The most recent 3-game splits, tell us that… the Fu’fense, although better than average (still) technically; has been stuck in about 3rd-gear on their run-shapes of late. The highly unexpected part was… that the Pitt halt-unit has slipped just a little it mo’ than the Fu’fense has! The slightly unexpected part is that… O&M eggs and j.Ham statistically equilibrium or break-even in the last 3-games compared to the seasonal O&M stop-unit norm’. It is however the Panther O that has been declawed by –90-yards per game to the worse in the last fortnight of play!

The H/A splits, tell us that… the VeeTee O & D alike and the Pittsburgh O & D alike… all things moved slightly to modestly in the Panther’s favor up on the 3-Rivers Triangle Point. Nothing killar or backbreaking mind you… tho a 5×5 set of movements in favor of Johnny Majors first National Champion team. About a ½-play indicator to two Safeties leaning Pitt’s way at most if you will.

Our handy dandy friend, the so-called: Forum Guide of Graham Houston fame is merely calling for an absurd looking 37-point VicTory on Saturday. Even when taken pro-rata… it is still calling for a ~12-point Tech Triumph come ~8 PM.

That said… there is a comfort to be drawn/taken here… as VeeTee has fared noticeably better vs. our 3-in-common opponents’ round-robin head-to-head than Pitt has.

With no word yet from Ghidorah, (the 3-headed Japanese movie monsta).

1o5.
Memorize that one Hokie Nation.

As Pitt is 4-1 (or 80%) when they merely crack just north of the centennial rushing tally for any given game this campaign. (and the one L was by 1-point, in extra innings). Now, the sayers of “nay” among you will say that 105 yards rushing per contest ain’t much rushing, right? And you’d be correct good Sirs.

Nevertheless… it almost makes the Pittsburgh O about 1.33 dimensional as opposed to uno-dimensional when they only churn out 86 ypg on the ground when getting beat. And two of those beatings they never broke 44-yards rpg and yet they got declawed by a combined –53 aggregate point-deficit in those two contests.

Do you see what I mean?

What Eye mean is… just a little over a buck and a nickel in rushing and the Pitt O is harder to key and goes from totally imbalanced to merely imbalanced itself.

As Pickett can wing his way at least a little ways… as it don’t take a lotta Pitt O productivity for the Pitt D to win.

As thus far, Pitt has only needed to best: 17, 20, 10, and 0 opposing points for the Panthers to hit the “meow-mix” and get totally cat-nipped post-game.

Or in other words… there is every science-fact Coach Spock reason to believe this one to be a race to 20. The first team there… wins. And that might just be code for a race to 17. Because both teams have been 2020 Smothers brothers’ yo-yo routines. It is just that Pitt’s basement-games’ Yo’ goes Yo’er or lower than V.Tech’s.

Making this one not so much my pet phrase of: ‘two ships passing in the night’…

As the one thing Eye am sure about here is…
…this one is all about the wildcard Home team.

As this is a close one… flip a coin and if you don’t like that flip it best 2-outta-3.

A Push. Pick ’em. Even. A draw kinda late afternoon scrum.
Which of course brings a playoff hole into play.

As somebody has gotta (eventually) funambulist this game.