The Hokies now host likewise (big) NAME Syracuse who checks in at a reasonable 13 up and 5 down on the year (and a tasty 4-1 in Atlantic Coast Clubbing). The Orangemen were picked semi-high in A.c.c. terms by most of my preseason wraps and have most of their 2018 contributors back accordingly. Yes, they are still the zoning champs up at Will’s “jiffy-pop-done” and yet this one is at O&M home. Nevertheless, you wanna know who is gonna win and by how much. So read on, to find… out!

Coach Boeheim has only guided the Orange to nine Big East regular season championships, five Big East Tournament championships, and 28 NC2A Tournament appearances and one National Championship (2oo3 with ‘Melo Anthony). He only has 13 conference titles, six National Coach of the Year awards, and four Conference Coach of the Year awards. He is only a member of the Basketball Hall of Fame and the College Basketball Hall of Fame as well. He has only won six International Gold Medals three of which are Olympic. He sucks; fire him, now! Nevertheless, coach B was forced to vacate a backbreaking 1o1 total wins from the 2004–2005, 2005–2006, 2006–2007, 2010–2011, and 2011–2012 seasons due to recruiting violations. He is also down eight schollies over the next year and was suspended the first nine games of 2016.

Boeheim and his wife, Juli, have three children together: Jimmy and twins, Buddy and Jamie; he has a daughter, Elizabeth, with his ex-wife Elaine.

The second-year Marek Dolezaj is a 6′10″, 18o lb. imported Bratislava, Slovakia; rail thin, poster-child for protein shakes and slices of cow everywhere. I mean there is string-bean and then there is Marek Dolezaj. And Dolezaj (somehow) grew an inch and then (somehow) shed 10 lbs. for it as well. Marek has been in Euro’ or global competition for five straight seasons; so I doubt that experience is an issue here. Dolezajis said to be a skilled big man with the ability to score inside and out. His European digits paint the pic’ of a box score stuffer, and right now he is dropping you 3.2 ppg, grabbing 3.3 rpg on .5 bpg and 58%. Now imagine him if he just finds a high school body to boot.

Bourama Sidibe is an imported Bamako, Mali baller, who goes: 6′1o″, 2o5 lbs., Soph., as a C-P/F combo frontcourter who can run the floor, protect the rim and operate pretty adequately enough down low in the post. Sidibe is a defender with a few legit low-block moves. 3.1 caroms, 2.4 points on 47% shooting in relief. (down nearly 20% and 20 lbs. from 2018)! 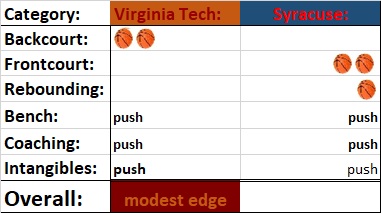 the takeaway:
The takeaway here is… the ‘Cuse has been hot of late -just ask then no.2 Duke- and Jimmy may have them just starting to round into forum as I type.

As the Orange have won seven of their last eight and are playing better by the week. If/when they can shed their offensive yo-yo or inconsistencies… this is a sleeper defensive A.c.c. pick.

As the ‘Cuse has been heating up from the outside with the basketball while chilling opposing peeps out recently from range as well. 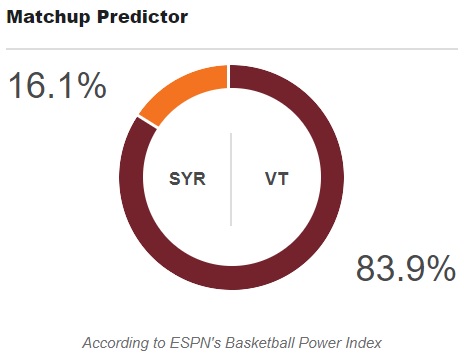 Virginia Tech is +3 on rests or R&R and running at home and after being on the Atlantic Coast road since Wednesday night, that has to be a factor here.

Though does that factor into an O&M VicTory or not vs. the always squirrelly Syracuse much vaunted 2-3 zone?

As the ‘Cuse and that 2-3 zone are an Association ‘esque 571 miles into this two games in three days roadie and that makes me wanna say that home is where the heart (and the fresh shooting legs); be.

To be sure… just ask ESPN 8 pm Saturday night and ESPN3 streaming if your local i-net/cable provider so provides.

However, by reading these very words you did ask me… and if you ask me the numbers don’t lie. The first number is that V.Tech has not L as a host (10-nil), although ‘Cuse has not been beaten when traveling as a guest (3-zip).

Our handy-dandy friend the s0-called Forum Guide of Graham Houston fame says… V.Tech routs the ‘Cuse by 23 at home. Which seems a bit binary (2-game-count) skewed to me. i.e. Forum Guides need three, four, hits before they round-robin soar.

The year-to-date or seasonal-stats connote that… V.Tech is +4% on shooting-margin overall, +5% on 3-point margin and staggeringly nearly +2 boards on the glass in annual terms! (note: the yearly margins were all about V.Tech being better on O and ‘Cuse being better on, D).

The most recent five-game metrics, however, aver that… oh, how things have, changed. As ‘Cuse is now up +7% on shooting-margin from the floor, up to an amazing +14% on 3-point margin and yet V.Tech is a nominal +1 in rebounding margin on the glass.

I am want to agree that we are the Vegas big-board betting-line (VT-6) or Virginia Tech has been installed as a six-point favorite in our New River Valley chilly late January backyard. Granted…

I do however part company with the index predictors that I consult -like the ESPN one- up above that have V.Tech pegged as a mid-80’s percentile favorite to win straight-up. That’s just non sequitur for a 2-3 zone max’ defense that typically holds peeps to high 30’s percentile shooting year-in and year-out.

Because as you can see above… one could rightfully argue that these are two ships passing in the… night.

And one could be forgiven for wondering if Buzzketball has peaked —(as someone did wonder out loud here just a few weeks ago). Likewise, you have to wonder if ‘Cuse is just rounding into roundball form. (i.e. just sniffing up on their ceiling).

In upstate New York, I’d sure pick the Orangemen to leave the Hokie-bird all black-n-blue.

Over in the New River Valley -where any A.c.c. visitor wins about 3/10 times- and with extra prep time for P.J.’s flexbone and Jimmy’s zone-defense… this game is a toss-up, pick ’em, or even by me.

Homesteading Buzz and Co. have a decent shot.
Although this one is not the long-shot the rest of the alleged cognoscenti say.