Today’s word of the day is… chimera

After this Coach Clawson really went itinerate or Larry Brown vagabond in the lower echelon college ranks. With tourstops at: Brown, Villanova, Leigh, and eventually at Tennessee. Then he broke in as a head-honcho at: Fordham, Richmond, Bowling Green and now at Atlantic side Wake. Coach Claw’ has never posted an overall tenured L’ing mark tallying north of .5oo ball by the time he left the given school. i.e. he improved every single program that he served as the head-master thereof. Not everyone can say this either folks. Coach Dee.Cee. has won three-straight bowl games @Wake, although he was o-for-life in the post-season prior to that. And frankly getting lesser talent(s) exposed on longer post-season prep’ times is regular season Coaching the capitalized verb.

While only being Conference Coach if the Year four times and only being a lowercase classification National Coach of the Year; twice. I know that’s not the So.East. or murders row— nevertheless… is coach Claw’ the first coach in the history of history to do this? Coach Claw’ has also spawned one former underboss into a big whistle in his own right: namely: Russ Huesman: Chattanooga (2009–2016) then Richmond (2017–present). 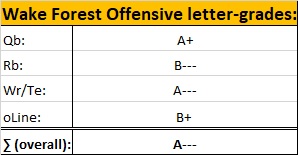 Wake Forest is 64th in Net Punting and so is 6′3″, 190 lb. final-year Dom -great name- Maggio. Nyet comrades. That’s not a typo as he has that M.l.b. turnkey mixed sporting metaphorical of a name indeed. Dom is going for the following careerist kicking-metrics… while the P1 for the Dec’s, Maggio has merely booty-called his way to the following: almost 250 career punts, great for over 10,100 career punting yards and fourth in wake history with a career average of 42.7 ypp. That does not suck and experience does not lack here, as this deserving Ray Guy Award nominee is a very very good P; if not a great one. The only caveat might be missing just a scosche of pure bionic-man leg-strength, tho’ 50+ with good hangtime is Dom’s normal day at the driving range. Dom is also an extremely rarified student-athlete turned a member of Wake Forest’s Student Advisory Committee and he was only named to the A.c.c. Academic Honor Roll. Dom was merely the no.1 P in the nation according to Kohl’s and he was a 3-sport star to boot (hoops and seams). And oh yes, his old-man was only the starting P at someplace named: U.c.l.a.

Nick Sciba is a quality place-Kicker. Actually, he’s a perfected quality Place-Kicker as Nick has yet to 2019 miss (15 for 15 FGA’s and 36 outta 36 on P.A.T.’s) and he is only a paltry 86% for his collegiate FG-kicking life. Yes, I’d have to say that counts… as Mister Sciba is an automatic-weaponized version of the FG-Kicking position itself. A reasonable caliber one to boot what with his 5′9″, 190 lb., plucky looking or sawed-off sophomoric approach to kicking (aim block-points low here coach Shibest). The queer thing is… Nick only has one make >39-yards thus far. (A 47-yard long last year). So, Nick may not quite be an Iowa Class 16″ main-gun after all, although his optics and targeting software inside of 40-yards is Bismark epic indeed. And Wake will go to Nick on any medium FGA and take the 3-pointer and KO next, for it to boot. The no.7 Kicking prospect in America (per: 247Sports) and he has something inked about his “dad” on his left inside biceps. Kool kid, and a cool-Modine K who obeys his range to the 100th percentile degree. (BONUS Pts. are awarded for being a:  Kick-it-to Cancer and the fight to help stop pediatric cancer sponsor, and his G.P.A. is a mere 3.8o; may St.Elmo’ bless Nick).

Special Teams letter-grade: strange ST’s… everything checks in as average+++ to perfect. ‘cept kick-coverage which is about like having 11 me’s go cover a kick. LOL… don’t know what’s
up wif dat, though I do know that caps/lower the whole shebang. B— here.

Number of Deacons who could “preach” @Tech=11

The takeaway here is… that SpaceX or any of the other civilian heavy-lifters agencies might wanna contact coach Claw’. As Clawson is one of college football’s best satellite launchers. Although now he must go Yuri Gagarin and achieve a lasting A.c.c. orbit in lieu of an A.c.c. obit’ for the very first time this campaign.

As this is a good coach and he has his program on the come; even if 2019 is Coach Clawson’s first real sniff at an actual finishing winning record inside the A.c.c. i.e. he is just 15-29 in the A.c.c. to date.

And this tells you just how much O.O.C. harvesting he has indeed successfully done. Nonetheless, and barring the bottom falling out, W.For’ is well ahead of schedule and big whistle Davey Clawson really should merit some measure of All Coaching Conference consideration.

On the flip-side, the practice reports seemed upbeat enough after a potentially brutal: we let one get away ending; which could maroon a youngling team down in the dumps over in South Bend.

I like this… tho’ I wonder if this is a so-called: ‘moral victory’ or if they are just not old enough (yet) to really know any better? Either way, I do not expect to see us playing the 5Q of N.Dame this Saturday down in the New River Valley

Our handy-dandy friend the so-called reflexive or round-robin driven Forum Guide of Graham Houston fame is calling for a 1.5 play or a 10-point summarizing Deacon win. The yardage markers, however, are positing, averring and connoting a stunning 8-point VicTory FWIW. (this surprised me a bit, you?)

The total yardage maker favors Wake by 135-yards per game on the year and would basically predict a two-score triumph. Over 115 of which is via the airwaves as Wake only modestly outgains V.Tech on the ground. The stop-units on the year are separated by a mere 9′. With Wake being superior vs. the pass and Wake being inferior vs. the run.

However, since our Qb1 swapmeet or in the most recent 3-game terms… we see that Wake is nearly the same on O overall tho; throwing a bit better of late. V.Tech is upwards of 35 ypg of total O to the better; most of which is down in the dirt. The defensive 3-game trends are more telling and less expected… here we find that V.Tech has tightened its run-fighting belt by a slimming virtual 50 ypg to the great. Nevertheless, V.Tech has loosed up in secondary or air force measurements by an unwelcome near 80 ypg worth of aerial default. Whereas Wake is a little worse for the wear on the ground and yet a bit better in atmospheric terms for a near-net push.

The most intriguing thingy however is… Wake is more inviting on the ground and yet V.Tech is entirely inviting in pitch-n-catch terms. Meaning: Corny & Fu’ need to shrinkwrap this game up nice and tight the same as @N.Dame and try to pinch a fugly one late.

Lo.FM (Long-field Management©) if you consult the Wake 1st and 3rd down markers above, you see the Wake O stays well ahead of schedule and the Wake D plays on schedule or better. Making this one an extremely dicey Lo.FM match-up. (though there were a few oLine Tackles for a Loss openings here, Wiles and Co. plum better play like their whole entire head ‘is on fire’ to max’ this possibility out)

TTT (Time To Throw©) Wake protects very well and they get after your Qb decently enough. Not an easy team here as the ball gets outta the Wake Qb1’s hands on the zippy zip most plays.

Right now, on Tuesday evening, I am leaning that Wake is something of a mini-me or more jacked-up version of Duke. A pretty well-coached club with a few more twitchy types of burst players who could elongate a narrow game late.

Or just X.L.John.Holmes this one from the get-go if either of our underclassmen Qbs finally plays a nubile or undercooked game.

That being said… it is now early Friday morning and try as Eye might, I just did not see any objective/science-fact reason(s) to call for the O&M upset play here.

Primarily, Wake has too much O and we lack secondary reasons to be able to R.A.T.T. hang with them. At least in the initial 30-minutes of scrumming. And if that is indeed the case how do we play fire-drill football having to scramble out of a post-intermission, hole?

Or in other words… in Hooker’s rep’ count, we have yet to see him have to play form the chase.

We have only seen him play from out in front, on the lead; or at equilibrium, on the even. This is a very high-powered Wake O and it is gonna take some points to put Wake down here folks.

Ergo, therefore, to Whit, you tell me… do we actually tally-ho and drop ~5.5 full scores on these Deacs? Or is busting 40-points all Greek to the Corny and the Fu’fense as Wake gets preachy on our recently upward trending χ‘mera indeed?